Why there were no T-14 Armata in Syria 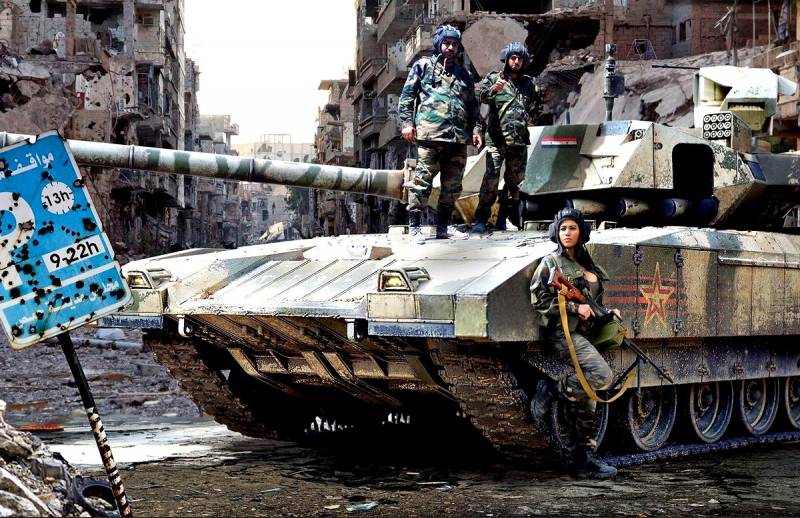 The other day, it became known from the words of the Minister of Industry and Trade Manturov that the T-14 Armata tanks, it turns out, "were tested in Syria." At the same time, neither the Russian military nor the foreign media, which closely monitor the events in the SAR, confirm the “sensation”.


What gives reason to believe that "they are not there"?

T-14 Armata is a tank with a difficult fate. His main problem is that in a certain sense he was ahead of his time and found himself in the price segment uncomfortable for the Russian Defense Ministry. The combat vehicle has an advanced design and unique characteristics. Due to the uninhabited tower, the crew was reduced to 3 people. The tank uses active and passive protection systems. It can be used to conduct “network-centric warfare” not only independently, but also by reconnaissance, target designation and fire adjustment for other tanks, self-propelled guns and air defense systems. On the basis of the Armata platform, a whole family of tracked armored vehicles can be created.

T-14 was good for everyone except the final price. According to the Director General of Uralvagonzavod Oleg Sienko, subject to mass production, the cost of one tank will be 250 million rubles. 20 units were actually released, which made it possible to call Armata a “front tank,” another 100 units were ordered, apparently in order not to recognize the project as completely failed.

The Russian military found the T-90AM tank and its modifications more in demand. Last year, Uralvagonzavod announced that the T-90M Breakthrough tank could become Russia's main battle tank. In addition to the fact that the combat vehicle is built on a time-tested platform and in practice, a relatively affordable price, due to the mass production, speaks in its favor. Large batches of the T-90 series are exported, including under license contracts. For example, in 2006, India entered into a contract for the assembly of 1000 T-90 Bhishma worth $ 2,5 billion.

Apparently, the Russian government is not averse to taking the same path with respect to the T-14. An expensive but outstanding tank could be enjoyed by the Middle Eastern monarchies, closely monitoring the actions of the Russian contingent in Syria. But, in addition to the high price, “Almaty” has a second drawback, which is much easier to fix: the lack of practice of its combat use.

And here there is an unconfirmed story about the “run-in” of the T-14 in Syria. The question is, what exactly is meant? The appearance of the Su-57 in the Arab Republic was instantly covered by the media. Videotapes appeared on the network, and a bit later, satellite images confirming the location of the latest Russian fighter in Latakia.

If Armata were lit up in battle, the Internet would immediately be filled with a mass of photo and video confirmations. The Syrians themselves would not miss the opportunity to take a picture next to the most modern tank in the world.

So why do you need Armata in Syria? Just ride? We need sand - for God's sake, go to the Astrakhan region. Need mountains - Ural, please, Caucasus. Need some heat? In the summer in the Kuban +40 and above. Why are the conditions of Syria so unique? Yes, nothing. There were no objective reasons for running in the newest tanks in the ATS and there is no.

It is very significant that the military themselves are silent about this. It seems that the present to potential buyers provided the Minister of Commerce Manturov. That's just being done, it is somehow completely unconvincing, it even becomes a little awkward.
Ctrl Enter
Noticed oshЫbku Highlight text and press. Ctrl + Enter
We are
Ukraine from the inside: traitors, curators and those who watch from the Kremlin
Ten "defeats" of Putin
Reporterin Yandex News
Read Reporterin Google News
Ad
The publication is looking for authors in the news and analytical departments. Requirements for applicants: literacy, responsibility, efficiency, inexhaustible creative energy, experience in copywriting or journalism, the ability to quickly analyze text and check facts, write concisely and interestingly on political and economic topics. The work is paid. Contact: [email protected]
58 comments
Information
Dear reader, to leave comments on the publication, you must to register.
I have an account? Sign in