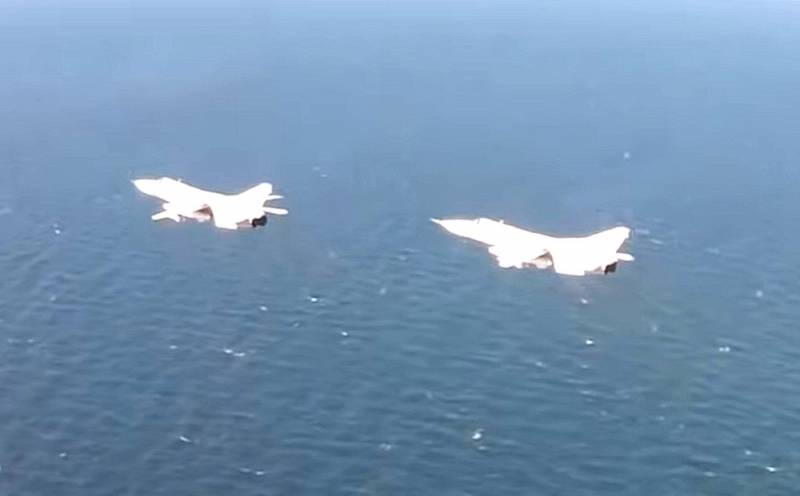 The Baltic Air Force F-16 fighter, based in the Baltic states, was alerted and sent to intercept a group of Russian tactical front-line bombers Su-24, which were sent to the USS Donald Cook destroyer in the Baltic Sea. This was reported by the press service of the NATO bloc, posting a video and clarifying that the incident occurred on April 17, 2020.

A group of Russian fighters appeared in the sky above the Baltic Sea. The planes were approaching the destroyer "Donald Cook" of the US Navy. For interception from the Šiauliai airfield (Republic of Lithuania), the Belgian Air Force F-16 fighter was raised. He intercepted a group of Russian Air Force fighters over the sea
- said in a statement "peace-loving" Alliance.

It is noted that the mentioned video was shot from the F-16 cockpit, which is located in Lithuania as part of the “mission to protect airspace on the eastern flank of NATO (Baltic Air Policing)”. The footage shows how the F-16 accompanies Russian aircraft, including two Su-24s, armed with X-25 air-to-surface missiles. The video was accompanied by praise to the Belgian pilot and a statement on the readiness of NATO aviation, located in the Baltic states, to perform tasks 24/7.

At the same time, the Americans do not specify that their warships generally “forgot” in the Baltic near the borders of Russia. We remind you that according to the repeated statements of the Russian Ministry of Defense, Russian planes carry out their movements in international airspace only in strict accordance with existing rules.
Ctrl Enter
Noticed oshЫbku Highlight text and press. Ctrl + Enter
We are
Washington sent its destroyer to the Black Sea
Why did the American destroyer arrive in Georgia
Reporterin Yandex News
Read Reporterin Google News
19 comments
Information
Dear reader, to leave comments on the publication, you must sign in.