Revival of the USSR: why did Putin warn the West 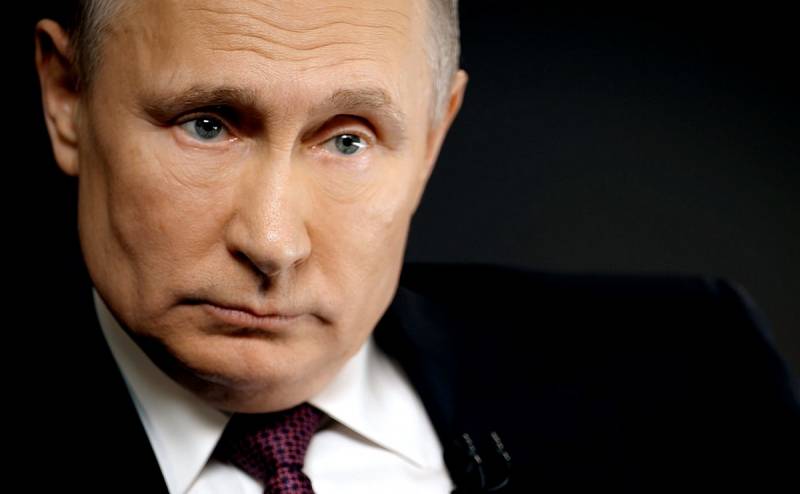 Quite unexpectedly sounded in the television program “Moscow. Kremlin. Putin ”on TV channel“ Russia 1 ”the words of the leader of our state about the systematic advancement of the countries of the“ post-Soviet space ”towards a new integration into something unified and, most importantly, the statement that“ phobias before the return of the Soviet Union ”in its former republics are a thing of the past.


Why did Vladimir Vladimirovich suddenly raise a topic in this difficult time, which is for the “collective West” a real nightmare and a subject of mass phobia? What kind of message is his speech and why did it suddenly go on the air right now?

The biggest horror of our "friends"

Perhaps, it is worth starting the discussion of this topic with references to when our “Western partners” were seriously concerned about “the desire for the reconstruction of the USSR emanating from the Kremlin”. Most likely, the starting point here can be considered 2010-2011, when the leader of Russia, while remaining in the status of prime minister. made some rather cautious and half-hearted remarks on this subject, saying that the one who does not regret the collapse of the USSR has “no heart”, but those who seek to revive it have “no head”, and after calling the collapse of “union indestructible ”no less than“ the greatest geopolitical catastrophe in the 2011th century ”. This was followed by an article by Vladimir Vladimirovich published in Izvestia in October XNUMX, in which he outlined ambitious plans: to reach a higher level of integration of the countries participating in the Customs Union and the CES to the Eurasian Union. At the same time, Putin emphasized that there was no question of recreating the USSR in one form or another, pushing for a completely different idea: “tight integration on a new value, political, economic basis. " Nevertheless, it was then that "on the other hand," on both sides of the ocean, "panic attacks" began. As an example, we can cite the publication in La Stampa at that time, which can only be called a “gazette”, after the enchanting boorish and ungrateful demarche arranged by it not so long ago about “useless Russian help in the fight against the epidemic,” language, right of word, does not turn . In 2011, the wise men wrote about "the desire of Vladimir Putin to revive the historical space, destroyed as a result of the collapse of communism, in the style of" copy and paste "under the sauce of the customs union" and his attempt to "create a surrogate of the Soviet Union in a" lightweight "version."

The Financial Times reaction turned out to be more balanced, noting that "this time Putin can really succeed." However, obviously frightened by their own courage, the authors immediately hastened to call the Eurasian Economic Community “empty talking room” and “prophesy” the imminent “collapse of the CIS”. However, the West really started to shake from the idea that Moscow really intends to seriously tackle the reconstruction of the Soviet Union after 2014 and the reunification of Crimea with Russia. “Here it is - it has begun! First, Crimea, then all of Ukraine, and then they will get to everyone else! ” - professional Russophobes of all countries, both post-Soviet and others, got hysterical. Particularly gifted, like the former commander of the Estonian self-defense forces, General Ants Laaneots, began to “reveal terrible conspiracies,” saying that the “plan for the occupation of the Baltic states” lies on Putin’s wide table, starting in 2014. But why do you think the 1st Guards Tank Army was created? Only to capture the "small, but proud" ... The general, of course, does not admit that the companies of the construction battalion would have been enough for them to have eyes. A great lover of the delicate taste of ties, Mikhail Saakashvili, went even further in his conspiracy theories. It is understandable - the general’s figure is rather big, but the president’s (albeit a long time ago) scope should be wider. This leader managed to name the date to which “Putin intends to recreate the Soviet Union”, and even the list of “doomed to annexation” of the former republics was: according to Saakashvili, the Russians would capture “Georgia, Armenia, Moldova, Belarus”, and in addition “all of Ukraine except Western. " This sore topic received new development at a time when Moscow made certain attempts to intensify the processes of creating the Union State with Minsk. They again spoke of the "restoration of the USSR." Then it calmed down a little. And then the president again splashed "a little gas tank into the fire."

Russia's manifesto in the new world?

The world media have not yet responded to his new speech on such a disturbing subject. It is understandable - the coronavirus is somehow more important. Ukraine is a different matter. There, even a pandemic, even fires throughout the country, even default on the threshold, but still - every word spoken in the Kremlin is more relevant than any personal troubles and problems. “Putin announced the reconstruction of the USSR: all countries will unite again”, “Putin spoke about the revival of the USSR”, “Putin publicly announced the restoration of the USSR” - these are just some of the headlines there. What is written under them is better for people with a weak mentality not to read. At the same time, anyone who gives himself the trouble to familiarize himself with the president’s words in their normal, and not mercilessly twisted form, will be convinced that in general there was no talk of anything like this. The conversation is again about "improving the competitiveness of post-Soviet economies by consolidating efforts", which "inevitably makes its way", contrary to "phobias and fears about the revival of the Soviet empire." Yes, the leader mentioned a common Russian language for all, a common infrastructure that promotes integration, which he called "absolutely natural business." Except that at the same time, he almost for the first time directly called “opposition of the West”, which “is afraid of economic competition”, one of the main reasons, which hinder this integration. And what’s interesting! This interview was recorded back in October last year. Why did it go on air right now? “They wanted to distract the people from the pandemic ...” or “there was nothing more to give” - such, so to speak, “versions”, voiced by some already, should not even be considered. In the Kremlin, "just like that" nothing is done and not said. Well, if these, albeit extremely restrained, but nevertheless sounding provocatively and frightening words for the West sounded when they sounded, then there was a specific reason for this.

The most logical explanation, perhaps, should be considered the desire of Vladimir Vladimirovich to give a rather soft, but more than transparent answer to the sharply intensified recent attempts to “force Russia to join the global world”. On his, this very world, of course, conditions. In this case, what was said from the television screen should be regarded as a clear warning to the Kremlin. Russia outlines an area of ​​its own vital interests, which are no longer strongly recommended to stick to “global” in the future. And also - an indication that Russia intends to build its own future, first of all, with the former republics of the USSR, and not the countries of the West, even during the global pandemic, who do not want to weaken an iota of the humiliating sanctions regime against it. It is also quite possible to consider what was said to be an expression of Moscow’s vision of the future structure of a new, “post-coronavirus” world. It will definitely differ from the one whose days ended in December 2019. New geopolitical realities, new all-planetary “alignments”, new “centers of power” and new alliances - all this is not just inevitable. This other reality is already being formed today, literally before our eyes, and why should Russia have to look for its own place in it at someone’s prompting? It’s possible that Putin’s interview came right now, at a time when some countries were talking about the peak of the pandemic and the upcoming transition to a “recovery period” in order to enable the West to reflect on how to further build relations with our country what to expect from her and what to prepare for. So that later it would not be excruciatingly painful ...

The revival of the Union of Soviet Socialist Republics in all its power, strength and glory, in the present realities, alas, is impossible. First of all, due to the lack of a single ideology for all, a political force capable of accomplishing such a great, titanic deed. Yes, and the former “sisters” had already gone too far to merge into a single family again. Someday - perhaps, but certainly not now. “Capturing" or "occupying" any of the post-Soviet countries - such nonsense can only be born in the inflamed consciousness of local nationalists or Western "experts" of not the highest level, seeking to find a reason to create a bogey "Russian threat." Who to capture, and, most importantly, why ?! But to create something like the European Union - with a common market coordinated by industry, transport, possibly even a single currency, would be very tempting. In the new reality created by the pandemic, the world will be much less global, however, strong and reliable alliances will be appreciated in it even higher than before. Without them, many countries will find it extremely difficult to survive. Another question is that any such association, no matter what specific forms it has and whatever it is called, should in no case follow the vicious path that, unfortunately, has prevailed for many years in building relations between Russia and the former "fraternal" peoples. " It's no secret that the leaders of many of them, including those considered to be “pro-Russian,” looked at our country exclusively as a source of endless material and other benefits, completely not wanting to take retaliatory steps.

What the indulgence of such a position leads to - we can clearly see today with the example of Belarus, whose president has recently reached openly anti-Russian rhetoric, which is confirmed, moreover, by appropriate actions. Naturally, any union, including interstate, should be built on mutual interests and benefits. However, the situation where Russia provides someone with unprecedented preferences and discounts, for example, with energy supplies, and in response hears painful complaints about “infringement of sovereignty” and all new demands and claims, is unacceptable. The leadership of our country in any kind of alliance created in the "post-Soviet" space is a priori determined by its greatest economic and military power. And also, if you like, succession from the USSR, which other republics abandoned. Sooner or later, an understanding of this undeniable moment will come to all those of them who are thinking about their own future. Then we’ll talk about real integration.
Ctrl Enter
Noticed oshЫbku Highlight text and press. Ctrl + Enter
We are
Ukraine from the inside: traitors, curators and those who watch from the Kremlin
Ten "defeats" of Putin
Reporterin Yandex News
Read Reporterin Google News
Ad
The publication is looking for authors in the news and analytical departments. Requirements for applicants: literacy, responsibility, efficiency, inexhaustible creative energy, experience in copywriting or journalism, the ability to quickly analyze text and check facts, write concisely and interestingly on political and economic topics. The work is paid. Contact: [email protected]
78 comments
Information
Dear reader, to leave comments on the publication, you must to register.
I have an account? Sign in