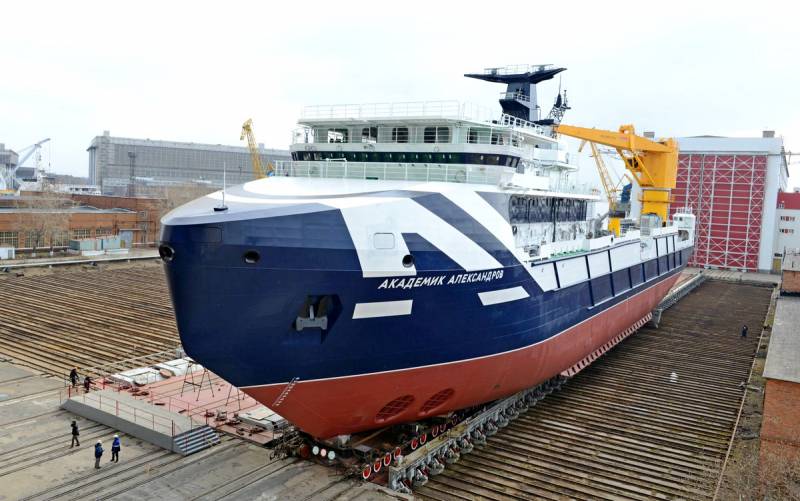 A month ago, a special oceanographic research vessel (OIS) “Academician Alexandrov” was transferred to the Northern Fleet in Severodvinsk without further publicity. Foreign intelligence will no doubt take this event with great interest.


Why, then, can a peaceful explorer of the ocean depths attract increased attention from understanding people?

The fact that the vessel is not simple is evidenced by the presence at the reception of representatives of the Main Directorate for Deep-Water Research (GUGI) of the Ministry of Defense. This is one of the most secret military departments, dealing, for example, with the Poseidon nuclear submarine drones, which the Kremlin has high hopes for.

Akademik Aleksandrov is an Arc5 ice class vessel with a displacement of 5800 tons. Its length is 96 meters and its width is 18. The speed is 14 knots, which is provided by two electric motors with a capacity of 3262 hp each. everyone. The research vessel is designed to operate in arctic and antarctic latitudes. It is equipped with three electro-hydraulic cranes, the most powerful of which is capable of lifting up to 100 tons. There is a helicopter landing area on deck.

Among the officially declared tasks of the “Academician Aleksandrov” are the following: work on the polar sea shelves, installation of bottom control and measuring and other equipment, monitoring of the test area, search and rescue operations, towing, lifting of sunken ships and others equipment. In general, an oceanographer is capable of performing a ton of useful functions.

However, peaceful research vessels in our realities often have a second purpose, military. Since the State Institute of State Administration took part in the acceptance of the Academician Aleksandrov, it can be assumed that it is equipped with specialized telecontrolled deep-sea vehicles. If necessary, they are able to carry out intelligence and sabotage activities: read data from submarine cables of the USA and NATO countries, introduce interference into their work, even destroy them.

But perhaps even more important is the task of the Russian oceanographic vessels in implementing the Harmony project. This is a promising domestic system for sonar tracking of underwater, surface and air objects. Within its framework, a network of robotic autonomous bottom stations (ADS) will be deployed that effectively control the underwater and surface conditions. The data received from them should be promptly transmitted via satellite to the command post of the Ministry of Defense of the Russian Federation.

For Russia, with its relatively weak surface and strong submarine fleet, such a system will be an indispensable tool in the constant game of cat and mouse with the USA and NATO. In recent years, our country has been actively building oceanographic vessels that can be used in the deployment of Harmony. Along the way, maps of the seabed are compiled in those regions where Poseidon can be used if necessary.
Ctrl Enter
Noticed oshЫbku Highlight text and press. Ctrl + Enter
We are
The newest 500-kilowatt electric motor was tested in Russia
The unique ship “Akademik Ageev” was launched
Reporterin Yandex News
Read Reporterin Google News
Ad
The publication is looking for authors in the news and analytical departments. Requirements for applicants: literacy, responsibility, efficiency, inexhaustible creative energy, experience in copywriting or journalism, the ability to quickly analyze text and check facts, write concisely and interestingly on political and economic topics. The work is paid. Contact: [email protected]
9 comments
Information
Dear reader, to leave comments on the publication, you must to register.
I have an account? Sign in