What is behind the US desire to first explore the moon 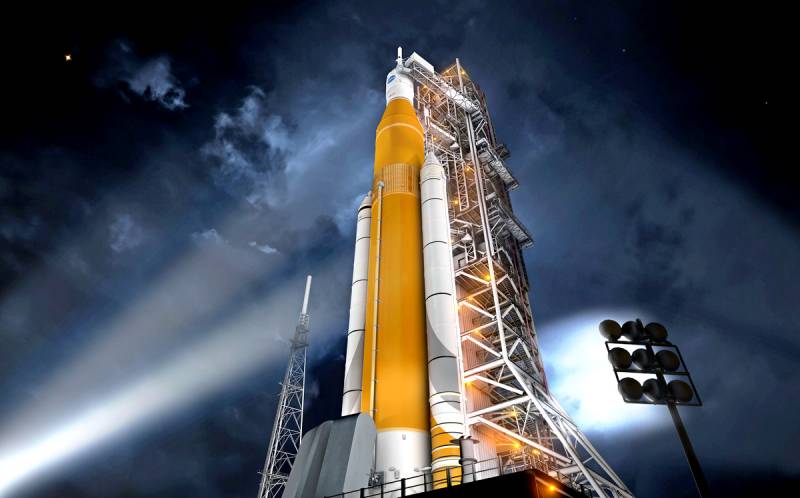 Cosmonautics Day, celebrated yesterday, was overshadowed (in addition to the coronavirus epidemic, which is now spoiling everything and everyone in our world), and also a new aggravation of the Russian-American dive on issues related to both the holiday itself and quite practical aspects of space exploration today.


However, with full justification, it can be considered that this topic turned into a particularly “sore” one for our country a little earlier - after Donald Trump voiced shameless and dimensionless, truly imperial ambitions for seemingly the property of all mankind, space open spaces and their wealth. What can be behind this demarche and how seriously should it respond?

Dunno - to the moon!

Let me remind you that the decree of his head was published on the White House website on April 7, according to which the United States no longer considers itself bound by the provisions of the Agreement on the Activities of States on the Moon and Other Celestial Bodies, adopted by the UN General Assembly in December 1979 and declare their the right to operate this celestial body (as well as all the others), including in the field of mining there, exclusively at its own request. Everyone who does not like this can contemplate Uncle Sam's middle finger or complain to the same UN, which, in terms of effectiveness, is, in principle, absolutely equivalent. A tiny legal “fig leaf” to this unprecedentedly impudent statement was proposed to consider the statement that space exploration and exploration is “a completely unique type of human activity” and, therefore, cannot obey some kind of mossy and Old Testament agreements signed, God knows who and when. From now on, the United States intends to boldly “engage in exploration, production and exploitation” of all valuable resources that have turned up under their extremely raking hands outside the planet Earth, guided exclusively by “current legislation”. I don’t need to explain that no brave American guys, even in their spacesuits, even without them, recognize laws of any kind, except for their own. This, in fact, is the question. To the rest of the world, this decision is imposed as a postulate and axiom, as a given, to dispute which is useless and fraught. Nevertheless, before throwing thunder and lightning, accusing the insidious Americans of real annexations and expansion, you need to understand something.

Proudly and boldly declaring “withdrawal from the Moon Treaty”, Donald Trump either did not know, or simply overlooked the moment that the United States, in fact, never signed it! And especially not ratified. As, incidentally, the Soviet Union, and subsequently Russia. The list of signatory countries that have ratified their obligations to never try to “grow” in the lunar or, say, Martian possessions, I think, will make you smile: Australia, Austria, Belgium, Kazakhstan, Lebanon, Morocco, Mexico, the Netherlands, Pakistan, Peru, Uruguay, Philippines , Chile ... Verily, the greatest cosmic powers of the planet! India and France, which still have their own space programs, put their signatures on the document, but they did not think to ratify it. No, this in no case does not mean that I do not agree with the statement made by Roscosmos that such kind of demarches, elevated to the rank of state policy one of the leading world powers should be regarded as a demonstration of "aggressive plans for the actual capture of alien territories" and arrogant "attempts to expropriate outer space." And with the words of Dmitry Peskov regarding the fact that "the privatization of outer space is unacceptable," I am not going to argue either. All these are quite correct words, which, of course, are supposed to be said in such situations ... And now let's finally take a look at things really! The problem in this case is not Trump’s decree at all. The question of who owns the natural satellite of the earth, asteroids and God knows what else, located in space, will be decided on a completely different plane, and not by someone’s decrees, and resolutions. But as? This is a topic for a really serious conversation.

Back to the realities

Before resenting the fact that the Americans decided to land on the moon, headed by their current president and row there with a shovel, I don’t know what specifically “valuable resources” it would be nice to start kicking these kids off of the oil fields in Syria! That's where they categorically are not supposed to be - and just in accordance with a huge number of quite legitimate, universally recognized international laws and treaties. And it really stops the USA ?! Yes, not at all. They want, they can, they take. And with the Moon everything will be exactly the same - if we approach the issue without hypocrisy. Only the appearance of our VKS in this country could stop the Americans in their desire to grab the same Syria entirely. Catch a parallel? Did the USA announce that they will “return to the moon” within the framework of the hasty, literally a year ago, Artemis program they proclaimed? Well, does Russia also seem to have similar intentions? And its own program, existing, let's say, a little longer. What did Mr. Rogozin promise us there? Until 2030, regular launches of space stations to the satellite, after 2030 - the flight of our astronauts. From 2035 to 2040 - we’ll settle down there already, we’ll build a lunar base. Everything is as it should be - with a bathhouse and an aviary for a bear, so that it would scare away any uninvited people ... And if you drop the jokes, then it's time to admit that the Moon will go to the one who will be the first to realize the program for its development. What are the "united nations" and the ideas they promote about the "brotherhood of all mankind", the coronavirus pandemic has shown, perhaps, more than exhaustively. A completely different era is approaching, in which demagogy will not cost anything at all - only the real possibilities of states and their peoples. So, we (or the Americans) would not stumble in the process of landing on the red flag modestly fluttering over the lunar mountains and seas with golden stars ...

And just do not panic about the fact that "the US is big, strong and rich, they will succeed, but we definitely do not!" Problems with the American "Artemis" from the start was a cart and a small cart. First of all, starting with financing, which assumed $ 8 billion a year "on top" of NASA's $ 20 billion annual budget. The SLS booster rocket with a carrying capacity of 70 tons and the Orion ship, which seems to be capable of flying to the Moon, have the status of "almost ready" and need serious revision. The most important technical component of the expedition - the lunar take-off and landing module has not even been developed at all! Moreover, the landing of astronauts for technical reasons will most likely be impossible without the creation of the Gateway orbital station in satellite orbit, the construction of which was initially categorically opposed by the White House Administrative and Budget Office - for reasons of economy. Let us recall that under Bush Jr., the Moon’s “reconquest" program, the Constellation, was already in place. It was covered by Barack Obama, who dreamed of flying immediately to Mars. Trump, by the way, was also thirsty there. Then they explained: you need to be more modest, confine yourself to the Moon ... Well, finally, let's compare the above figures of costs and problems with the real situation that exists today in the United States, where, due to the coronavirus pandemic, the state of national disaster has already been announced throughout the country. The current president’s desire to “make America great again” was thoroughly covered by a copper basin with the inscription “COVID-19” and statements about the upcoming moon Klondike, sounding from the White House, look like nothing else in this situation, except for a desperate attempt to switch the attention of the agonizing nation to some distant and positive object. However, there is still cause for concern.

Discarding the Agreement on the Activities of States on the Moon with one stroke of the pen, Washington, it seems very much, is aiming at the denunciation of a completely different treaty - On the Principles of the Activities of States in the Exploration and Use of Outer Space from 1967. It was precisely the United States and the USSR that not only signed, but also ratified. And along with them - and another hundred countries. The most important thing in the agreement is, again, not the declaration of outer space as “the property of all mankind”, but the strictest ban on the deployment of weapons of mass destruction, primarily nuclear. It is precisely from this point that the United States and Trump personally, as we recall, initiated the creation of the Space Command as part of the American armed forces, and intend to refuse in the very near future. And this is a serious headache. In any case, according to a statement recently made by the deputy head of the Russian Foreign Ministry, Sergei Ryabkov, Moscow and Washington have the most “fundamental, fundamental and profound differences” in many aspects on the “space issue”. First of all, on all issues that relate to "the prospects of deploying military strike means and other weapons there." According to our diplomat, between Russia and the United States there is an agreement to create a joint working group to establish a "space dialogue". But the American side, to put it mildly, is not at all eager to conduct any real negotiations. Moreover, according to Ryabkov's frank admission, "Washington seeks to discuss any topic solely on its own terms, and it demonstrates an emphasized disregard for the approaches of the other side." Most likely, there will simply be no dialogue ...

Herein lies the true essence and threat of space ambitions of the United States. Dmitry Rogozin can swear as much as desired on Twitter with Ilon Mask. This, as one well-known character used to say, is "trifles, an everyday matter." The fact that the State Department in congratulations on Cosmonautics Day managed not to mention Yuri Gagarin is utterly disastrous, of course. But what else can one expect from a country that has long declared itself, and not the Soviet Union, “the winner of Nazism” ?! All this is insulting and unpleasant, of course, especially on such a significant holiday. However, it’s really worth worrying not about the claims of American Dunno about the Moon, but about nuclear missiles and combat lasers, which they, apparently, are going to hang over our heads in Earth orbit.
Ctrl Enter
Noticed oshЫbku Highlight text and press. Ctrl + Enter
We are
Ukraine from the inside: traitors, curators and those who watch from the Kremlin
Ten "defeats" of Putin
Reporterin Yandex News
Read Reporterin Google News
Ad
The publication is looking for authors in the news and analytical departments. Requirements for applicants: literacy, responsibility, efficiency, inexhaustible creative energy, experience in copywriting or journalism, the ability to quickly analyze text and check facts, write concisely and interestingly on political and economic topics. The work is paid. Contact: [email protected]
47 comments
Information
Dear reader, to leave comments on the publication, you must to register.
I have an account? Sign in