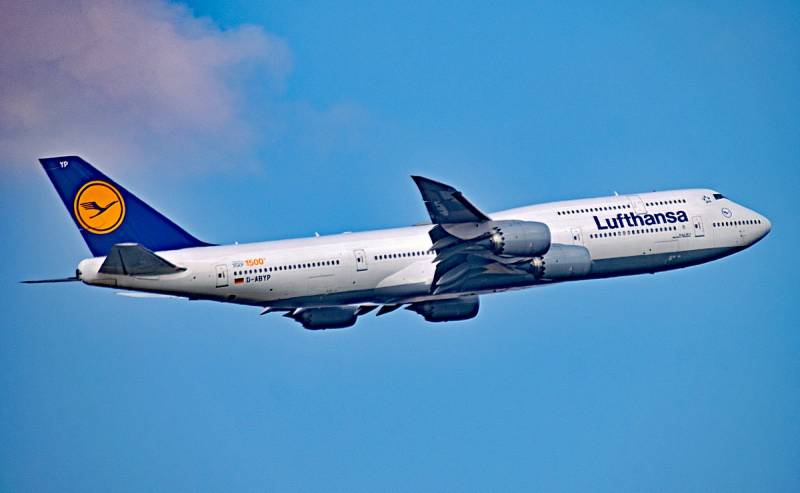 The COVID-19 pandemic, in addition to all the other evil that it has already brought to the population of the Earth, threatens to deprive people of one of the prides of modern civilization. Today, everything goes to the fact that air travel can again become exotic, become the destiny of the elect.


If a month ago, analysts scared carriers with millions of losses, today these terrifying figures seem ridiculous. On the verge of complete ruin were not only small operators of this market, but already leading world airlines. It seems that not all of them will be able to rise again in the sky after the end of the epidemic.

Best of all, the appalling scale of damage caused to the aviation industry can be assessed by the example of one of its recognized flagships - the German company Lufthansa. It should be understood that we are not talking about a national operator, even if it belongs to one of the leading countries of the European Union, but, one might say, about one of the main “pillars” of air traffic in the EU and even the whole world. The subsidiaries of Lufthansa are Eurowings, Austrian Airlines, Brussels Airlines, SWISS International Airlines. This, apart from a number of smaller subsidiaries, is like the Germanwings low-cost airline. That's just the suspension of its activities (most likely - unlimited) and announced in the parent company the other day, telling the world about the disasters that hit Lufthansa and the proposed measures to overcome them. These measures, in truth, do not inspire much optimism. Especially for airline employees. In the very near future, they expect a massive reduction, threatening to affect 7 thousand employees, including 1.4 thousand from Germanwings. So far, the management assures that any decisions on restructuring will be made only after consultation with the trade unions and their approval, and all employees who are affected by the "optimization" of the number of employees will be offered work in other divisions of the company. It sounds encouraging, but everyone knows that often it is from such lulling speeches that mass layoffs begin. The situation is especially alarming due to the fact that Lufthansa is going to let under the knife not only the people working in it, but also the holy of holies of any carrier - its own fleet.

To date, about 700 of the 763 aircraft owned by the company that announced the extension of regular flights, at least until May 3, remain chained to the ground. Not all of them will be destined to break away from it at least once more. On April 7, Lufthansa announced plans to reduce 6 to 10% of its fleet. In exact numbers, we are talking about at least 43 aircraft. First of all, 7 long-range Airbus A340-600 airliners and 5 Boeing 747-400, as well as 11 short-haul Airbus A320 aircraft, will be finally decommissioned. Also, decommissioning awaits 6 of the 14 giant liners owned by the company Airbus A380. Lufthansa planned to sell them in 2022, and now is forced to simply send it to scrap. In addition, a number of aircraft leasing agreements will be terminated. German carriers are not alone in such decisions - for example, the British low-cost airline EasyJet has already indicated its intention to abandon the previously ordered 107 new Airbus aircraft, as well as take other measures to reduce its own air fleet. Returning to Lufthansa, it is worth noting that all these extremely tough actions undertaken, by the way, for the first time in the entire rather long history of the airline, are by no means a whim, but a follow of the most urgent need. The airline’s passenger flow decreased from 350 thousand people a day to 3 thousand. This is not surprising if the largest airports in Germany claim a 95% drop in air travelers. The management of the company expressly declares how they see the industry's prospects: “It will be months before the travel restrictions in the world are completely lifted, and years before global demand for air travel returns to the pre-crisis level ...”

Unfortunately, the situation is exactly the same with the aviators of almost the whole world. The Transportation Security Administration of the United States states that this week, on Wednesday, a screening procedure at its subordinate airports was carried out for a total of 95 thousand people. For comparison, 2,3 million people were screened at US airports at the same time a year ago. Absolutely similar to almost German data on the decrease in the passenger flow of airline lines, accounting for 96%, is also reported in the Airline for America group. According to the information she provided, 9 out of 10 seats are empty on US domestic flights today. Finally, there are statistics on a global scale: over the past week, only 31 commercial flights have been operated by airlines worldwide. At the beginning of this year, when the epidemic seemed to everyone a distant and frivolous problem, threatening China alone (maximum to its closest neighbors), they carried out about 111 thousand such flights daily! Against the background of such figures, the recognition of representatives of yet another global “air brand” - British Airways - about the possible “temporary suspension of 80% of employees”, seems logical. Everyone understands that this, in fact, will mean, in fact, the closure of the company. In this case, 36 thousand people will appear on the street — aircraft crews, ground personnel, engineers, and even employees of the main office. Whether they will be paid for this “temporary simple” salary and to what extent is unclear. So far, negotiations on a mutually acceptable agreement are underway between the company’s management and Unite. British Airways says that at least they intend to pay pilots 50% of their salaries over two months. The question is, will the pilots return after this time?

Analysts at Bloomberg believe that by the end of May, most airlines around the world will simply go bankrupt because of the hell of a pandemic, unless the most drastic measures to support and save them are taken at the level of governments and international organizations in the aviation industry. Let us return to the same Lufthansa, from the story of the disasters of which we began our conversation. By the beginning of the current crisis caused by the worldwide invasion of coronavirus, this powerful company came up with financial reserves of over 4 billion euros. It would seem more than an impressive amount. However, today its CEO Karsten Spor claims that “in general, the company loses a million euros from its liquidity reserve every hour!” According to the CEO, such an unimaginable loss can be sustained for days or weeks, but not months. Lufthansa declares that without state support it simply will not survive. There is reason to believe that official Berlin will be supportive of this plea for help and will do everything possible so that Germany does not lose its own national treasure, which has become one of its symbols, along with the same Mercedes-Benz cars. However, for the sake of objectivity, it would be wrong not to mention another, diametrically opposite view of the situation. So, the Chief Executive Officer of the Hungarian airline low-cost airline Wizz Air Joseph Varadi said that his company could easily exist in the current terrible conditions for a year and a half! It was said that it was just in order to criticize the possible intentions of the German government to provide all possible assistance to Lufthansa, which, according to Varadi, "will completely destroy the air transportation market."

The brave Magyar is taken to argue that the problems of leading European airlines stem solely from the fact that "they were poorly managed, especially in matters of liquidity." Based on this, he calls on all European governments not to give “inefficient companies” a broken euro cent - let them die! If you believe the leadership of Wizz Air, they’re not going to stop activities there, but they intend to replenish their fleet this year and a half with dozens of previously ordered Airbus A321 neo aircraft, which should become the key to the company's prosperity when the pandemic recedes and air traffic finally will recover. It is difficult to say whether these statements are the result of accurate calculations or bravado - especially given that 90% of the Wizz Air fleet is currently on the ground, like its colleagues and competitors around the world. The assessment of the International Air Transport Association sounds much more realistic, according to which European airlines have sufficient funds to withstand a situation in which all of their aircraft will be chained to the ground for literally two months. Further, serious problems will definitely begin. According to far from the most pessimistic forecasts, 30 to 40% of air carriers will not survive a pandemic. But this, I repeat, is still not the worst of the options ...

All that remains to be said is that Russia is not particularly interested in the situation in the aviation industry developing according to a catastrophic scenario. Cause? Modern passenger airliners of a new generation - it does not matter, Boeing or Airbus, even if equipped with the most economical engines and winglets that reduce fuel consumption burn about 3 thousand liters every hour of flight (or 3-3,5 liters per kilometer). One flight requires a fuel volume comparable to that which the average car consumes during the year! So for the current problems of our economy, for the “ridiculous” prices for an oil barrel, a falling ruble and other no less “pleasant” things, Russians can safely thank the cessation of air transportation on a global scale. Today, we can negotiate as much as we want to reduce oil production with Saudi Arabia and even with the United States, but if hundreds of handsome airbuses remain chained to the earth across all countries and continents of the Earth, we will not bode well with this. So it remains only to hope that the coronavirus attack will soon recede and humanity will regain its wings. Everyone will benefit from this.
Ctrl Enter
Noticed oshЫbku Highlight text and press. Ctrl + Enter
We are
Coronavirus "clipped wings" aviation around the world
Peace enforcement operation. Russia inflicts a preemptive strike on Kiev
Reporterin Yandex News
Read Reporterin Google News
Ad
We are open to cooperation with authors in the news and analytical departments. A prerequisite is the ability to quickly analyze the text and check the facts, to write concisely and interestingly on political and economic topics. We offer flexible working hours and regular payments. Please send your responses with examples of work to [email protected]
10 comments
Information
Dear reader, to leave comments on the publication, you must sign in.