The battle for Idlib: who will have to leave Syria 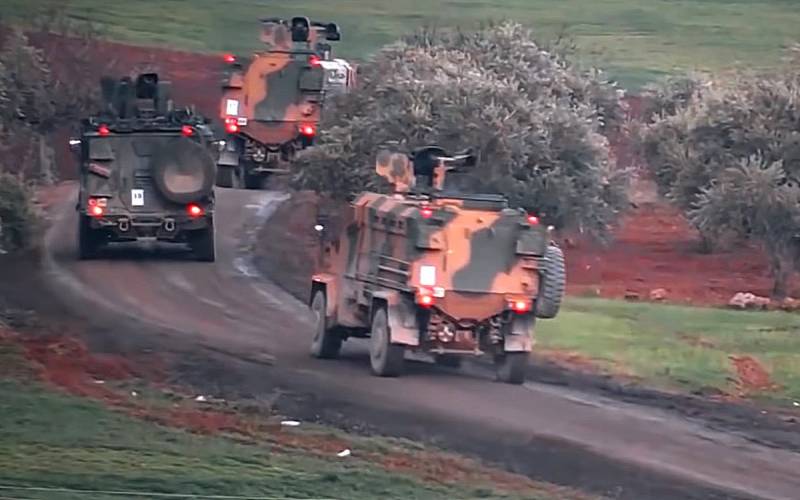 While the whole world is struggling with the coronavirus pandemic, the attention of mankind seems to be riveted to it and only to it alone. Nevertheless, other problems, both peaceful and military, have not disappeared. Sooner or later, the disease will recede, and they will regain the fullness of relevance - so that it is better not to forget about them now, so that later you will not clutch your head ...


For our country (however, not only for it alone), such a painful issue, “paused”, but by no means resolved, is the confrontation in Syria, and, above all, in Idlib, where the fighting, apparently, has been stopped only for a while, and even then not completely.

In fact, everything that happens in this province is the "key" to the fate of the entire state, which has been burning for ten years in a fire and turned into an arena of a geopolitical game of a considerable number of opposing forces, both internal and, to a greater extent, external . If Damascus succeeds in unblocking strategic routes and, at least, minimizing the activity of the “ruling ball” in this region of motley armed groups, the real recovery process can really begin in Syria economics and the infrastructure she so urgently needs. However, in the event that the militant enclave that has strengthened in Idlib, those who in no way want to lay down their arms, at the same time, it seems that they have completely lost a clear understanding of the goals of the war, they will be able to defend their Makhnovist freemen ... Then it’s for Bashar al-Assad could turn into a new round of escalation of hostilities, with which both the army and the country were already tormented to the last limit. It is necessary to understand that, by and large, at this stage the main role in what is happening is played by not so irreconcilable contradictions between the legitimate authority in the person of Damascus and some kind of either "moderate" or not very "opposition", how much the ambitions and intentions of the global players involved in the conflict - Ankara and Moscow, who had no intention of retreating from their chosen courses. The trouble is that these courses, despite all the declared declarations and signed agreements, are in fact mutually exclusive.

If it were not for the direct intervention of the Turkish army, a wet place and not too pleasant memories would have remained from the Idlib "viper" a long time ago. If it weren’t for the Russian air forces and military “specialists,” all of this fraternity, having backed from the same Turks in the rear, would have long ago regained all the lost ground and, well, having gained strength, would have begun to think about an attack on Damascus. Let's not forget how deplorable the government forces were in 2015, by the time our military mission arrived there. It was just right to order a retreat, or at least prepare for the “last and decisive” battle for the capital. Each of the parties understands perfectly well - hand it back and the opponent will not slow down using this situation to the full 100%, it will be extremely difficult to “win back” something later, if at all possible in principle. Attempts to solve everything with one swift blow (or several, but still extremely fast) were unsuccessful. The Turkish “blitzkrieg” was drowned - not least by the efforts of our air forces, but the SAR fighters, who hoped without too much trouble to “clean up” not too well-armed and organized militants, “ran into” the units of the regular Turkish army supporting them. What is happening today? So far - attempts to portray the conscientious implementation of the agreements reached during the last meeting of the leaders of the two states in Moscow. But so far it somehow doesn’t work out very well. A simple “plan” in the style of “take everything and share” voiced by the same head of the Turkish Foreign Ministry Mevlut Cavusoglu at the time: they say that the northern part of the M-4 highway will remain “below us” and the Russians and Assad control the southern part if they want, test practice does not stand up from the very first days. With joint patrols, too, somehow it doesn’t work out very well. So what to do?

Who will have to leave?

Moscow and Ankara can breed diplomatic “polites” as much as they want, and smile at each other, holding their bosoms of stones prepared for throwing, but only one of them can really control the situation on the spot, in Idlib. The fact that there will be no "dual power" there perfectly showed the unsuccessful experience of joint Russian-Turkish patrols of the same M-4, undertaken on March 15. Nothing good came of it, the local “barmalei” quite predictably staged a provocation almost in the very first settlement on the route - Aricha. As a result, in order not to “aggravate,” the patrol was forced to turn around after passing a couple of kilometers. Ankara was required to restrain unbelievable militants, but it is extremely doubtful that this enterprise would have any chance of success even if the Turkish side so desired. And there seems to be no such desire. In any case, a couple of days ago the head of the military department there, Hulusi Akar, stated that the “observation posts” of his subordinates would remain in Idlib. Moreover, withdraw military from there machinery and heavy weapons proud descendants of the Janissaries also changed their minds. All this in combination may indicate that some in Ankara do not give up hope that the "Idlib issue" will nevertheless be resolved in its own way, and by force. However, so far Erdogan, apparently, has switched somewhat to a different strategy. The Turkish leader undertook to intensely “nightmare” Europe, writhing in coronavirus torment, using the only instrument actually available to him for this - crowds of refugees from Syria. According to available information, the case is already reaching uniform battles on the border with Greece. At the same time, border guards and police officers are throwing grenades at each other in clashes on both sides. So far - gas ...

Moreover, rumors in Turkey are intensely inflated (and this is clearly done with the expectation of European "ears") that the president intends to release almost 30 thousand "prisoners" from places of detention in the near future and send them all to one and all the same Greek cordon. What is the purpose of this? Obviously, Ankara has not yet completely bid farewell to the illusions that the EU, NATO allies, or someone else will help it effectively “put pressure” on Russia to better resolve the crisis. Naive hopes ... Europe now, to put it mildly, is not up to Erdogan’s Syrian Wishlist. She now does not care about anything except her own survival. As, incidentally, the United States, the coronavirus suffers more seriously than many other countries in the world. Well, not so long ago, the head of the State Department stated that "the Russians are guilty of the murder of Turkish soldiers in Idlib." So what? Firstly, Mr. Pompeo doesn’t talk much, especially regarding our country, and secondly, who would have a cow ... Yes, on the next anniversary of the start of the civil war in Syria - March 15, at the level of the US and French governments, Germany and Great Britain made another “formidable” statement in which Bashar Assad was once again accused of some “atrocities” there and other sins, conceivable and unthinkable. And something there was about the “responsibility”, which he certainly must “bear”, and things like that. The main thing is that these, sorry for my French presses, once again emphasized that they were ready to give at least a broken penny of help to restore Syria only after "the beginning of an irreversible and credible real political process." That is - never. On the other hand, waiting for them to make any money after what the pandemic has done and will do with their own economies would be simply silly.

In the completely new reality created by COVID-19, Turkey remains face to face with Russia in Syria. And if so, sooner or later she would have to get out of there. And better sooner than later. Without Western support, if not military, but at least some, Ankara’s chances of an open confrontation with Moscow are zero. Moreover, our country is now, in fact, the last hope for the Turks - against the backdrop of the collapse of world tourism, the collapse of trade relations and the barriers and cordons established throughout Europe that will last for an unknown time. The Turkish economy, before the pandemic, was, to put it mildly, far from in a brilliant state - according to many experts (especially Turkish ones), Erdogan was carried to Idlib in order to drown out the murmur of dissatisfied problems inside the country with the thunder of military victories. None of this happened, instead of the “small victorious war”, Ankara received the deaths of dozens of its soldiers, an insulting click on the nose and a “frozen” conflict, which at any moment threatens to develop into a new blood bath. Not even an armed conflict, but simply a serious quarrel with Russia, at least at the level of 2015 and with the same “educational measures”, can become simply fatal for Turkey. At least in economic terms.

Fortunately, Russia, which does not experience even a hundredth part of the damage to the combat readiness of its Armed Forces, which the armies of the same NATO demonstrate today, does not intend to leave Syria in the least. It is impossible to come up with more eloquent confirmation of this than the recent visit of the Minister of Defense of our country, Sergei Shoigu, to Damascus. An extremely clear signal - to both Bashar Assad himself and Erdogan: “We will not leave!” Now for our country is a great opportunity to really successfully complete the Syrian campaign. Really, it’s worth using it.
Ctrl Enter
Noticed oshЫbku Highlight text and press. Ctrl + Enter
We are
Ukraine from the inside: traitors, curators and those who watch from the Kremlin
Ten "defeats" of Putin
Reporterin Yandex News
Read Reporterin Google News
Ad
The publication is looking for authors in the news and analytical departments. Requirements for applicants: literacy, responsibility, efficiency, inexhaustible creative energy, experience in copywriting or journalism, the ability to quickly analyze text and check facts, write concisely and interestingly on political and economic topics. The work is paid. Contact: [email protected]
10 comments
Information
Dear reader, to leave comments on the publication, you must to register.
I have an account? Sign in