The demolition of the Turkish column: the truce in Idlib will surely come to an end 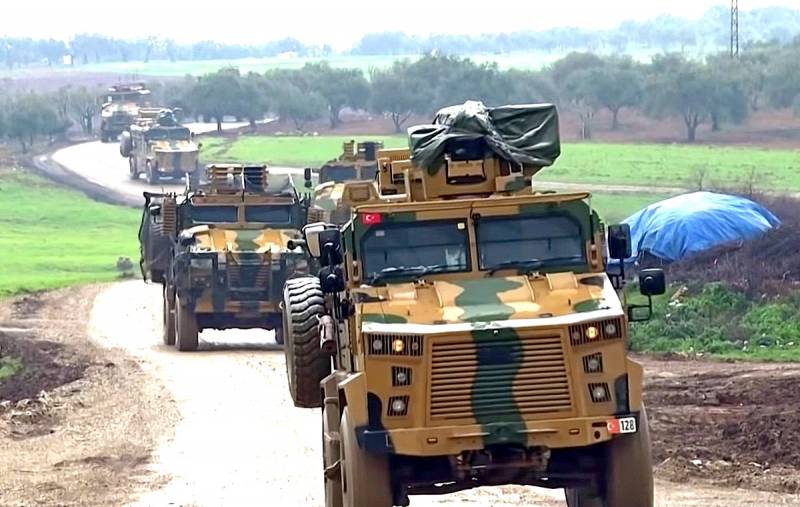 Apparently, the truce reached during the talks between Presidents Putin and Erdogan in Idlib will be very short-lived. The Turkish side again does not fully comply with its obligations, and also extrasystemic terrorist groups that began to wage their “partisan” war raised their heads.


When will the Moscow agreements be ordered to live for a long time, as has happened to the Sochi agreements earlier?

Recall that earlier Ankara took control of the Idlib de-escalation zone, pledging to disarm and "sort" the militants gathered in it. Instead, Turkish-invaded armed groups attacked SAR government troops and fired on the Russian air base Khmeimim. After numerous warnings about the inadmissibility of such a state, the allies went on the offensive and were able to recapture the southern half of Idlib province during the fighting. At the same time, the risk of a direct military clash between Moscow and Ankara increased sharply, as the Turks concentrated large forces in their borderland.

What is happening in Idlib now that everything has temporarily subsided?

At first, observers note that the Turkish army is digging in the territory they occupied seriously and for a long time. Instead of the joint Russian-Turkish patrols stipulated by the agreements, Turkish military convoys are deploying along the strategically important M-4 highway, machinery, tanks and air defense systems Atilgan. A capital base is being built near Al-Jih, which was also not agreed in Moscow, and engineering positions are being strengthened. Ankara demonstratively shows that it’s not going to go anywhere north.

Secondly, do not sleep and government troops of the SAR, which really does not like what is happening. Damascus does not intend to tolerate either Turks or militants on its territory. The Syrian army is currently focusing on a further attack on the settlement of Jisr al-Shugur, the informal "capital" of terrorists, located on the M-4 highway.

Thirdly, individual terrorist groups also began to show activity, and not only the Syrians and Russians, but also the Turks themselves began to get them. So, on the eve of the militants "Khurras ad-Din" ("Defenders of the Faith") ambushed the Turkish convoy on the M-4 highway. A landmine exploded on both sides of the road, after which terrorists fired at the military. All this happened near the village of Mukhambal, which risks becoming a new hotbed of tension.

If you call a spade a spade, then Ankara itself has created these problems for itself. According to the Sochi agreements, she was supposed to disarm the terrorists, but she did not. According to Moscow agreements, the Turks must clear the space north of the M-4 highway for six kilometers, and the Russians to the south. To date, this is also not done.

The Khurras ad-Din fighters are among the most radical and aggressive, including many foreigners, in particular Uighurs. After moving to Idlib, they made Muhambal their "stake", and Turkey has no direct impact on them. Now this system grouping, which is seated on a strategically important route that all parties need, is becoming a source of constant tension and threat.

It can definitely be said that such a truce will end in a new, even more bloody battle. The wait is not long.
Ctrl Enter
Noticed oshЫbku Highlight text and press. Ctrl + Enter
We are
Putin's phenomenon is Russia's main problem
Ten "defeats" of Putin
Reporterin Yandex News
Read Reporterin Google News
Ad
The publication is looking for authors in the news and analytical departments. Requirements for applicants: literacy, responsibility, efficiency, inexhaustible creative energy, experience in copywriting or journalism, the ability to quickly analyze text and check facts, write concisely and interestingly on political and economic topics. The work is paid. Contact: [email protected]
7 comments
Information
Dear reader, to leave comments on the publication, you must to register.
I have an account? Sign in