"What are you creaky": Russian fighters in Syria are watching the armored vehicles of the Turks 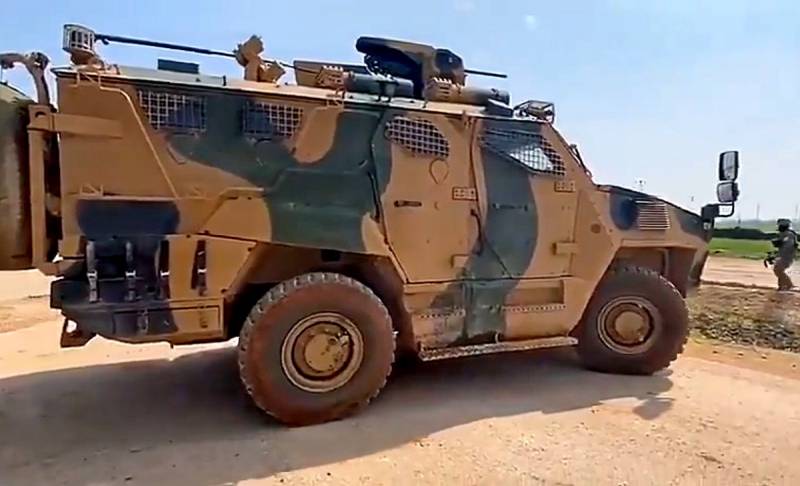 Recently сообщалосьas in Moscow, the captured Turkish armored car (MRAP) “Vuran” was most likely transported to the Patriot park to other exhibits from Syria. And now, a video from Syria was published on the Web in which the Russian military observed the movement of the Turkish armored car Vuran, commenting on what was happening.


It should be noted that the video is signed with the words: "This Vuran has broken, carry the next." The thing is that MRAP makes certain sounds when moving that are not characteristic of a fully corrected armored car. What the person filming the video pays attention to.

What creaky you are!
- the voice-over says, apparently, a Russian military police fighter.

The case took place during a joint patrol with the Turks on the M4 highway.


It should be recalled that the Vuran multipurpose medium armored car is manufactured by the Turkish company BMC Otomotiv. MRAP "Vuran" occupies an intermediate position in the line of armored vehicles of the company, located between the light "Amazon" and heavy "Kirpi".

At the same time, the Turks do not stop supporting "moderate" terrorists and other "Syrian refugees" in the Idlib de-escalation zone, supplying them with weapons, ammunition and technique, including the likes of Vuran MRAP.
Ctrl Enter
Noticed oshЫbku Highlight text and press. Ctrl + Enter
We are
Trophy Turkish armored car "Vuran" noticed in Russia
Overhead passages began to install on the highway "Tavrida" in the Crimea
Reporterin Yandex News
Read Reporterin Google News
Ad
The publication is looking for authors in the news and analytical departments. Requirements for applicants: literacy, responsibility, efficiency, inexhaustible creative energy, experience in copywriting or journalism, the ability to quickly analyze text and check facts, write concisely and interestingly on political and economic topics. The work is paid. Contact: [email protected]
3 comments
Information
Dear reader, to leave comments on the publication, you must to register.
I have an account? Sign in