US Media: Creating a nuclear train in Russia is an impractical idea 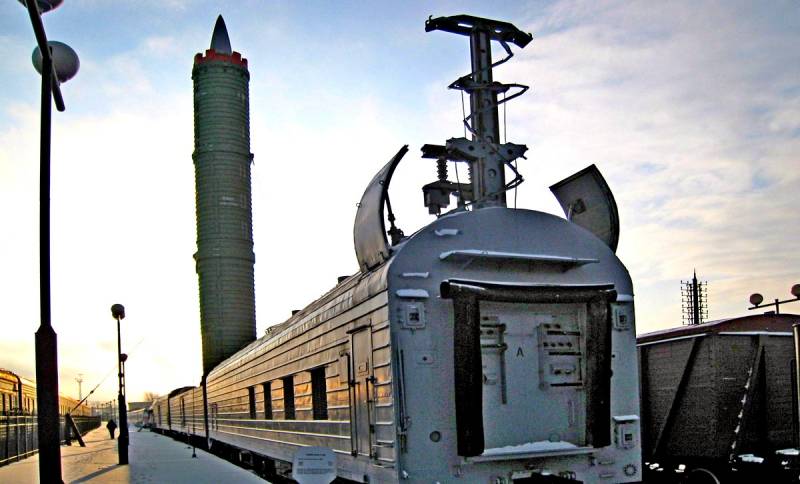 The creation in the USSR of a military railway missile complex (BZHRK or “nuclear train”) was “a clearly impractical idea that was not brought to an end,” writes The American Interest, an American publication. In the article "Nuclear Chug-Choo: The Soviets had a crazy idea about a nuclear missile train," the author explains his point of view.


The author (Sebastien Roblin (Sebastien Roblin), who received a master's degree in conflict resolution at Georgetown University and worked as a lecturer at Peace Corps University in China) reports that in the summer of 2018, the Kremlin released a flurry of videos showing various systems being developed in Russia nuclear weapons, "from the RS-28 Satan-2 ICBM and the Dagger hypersonic missiles, to the nuclear torpedo," capable of destroying coastal American cities with tsunamis from irradiated water. "

At the same time, the expert drew attention to the project for the development of Doomsday trains in Russia, the successor to the Soviet BZHRK. Roblin clarified that the concept of BZHRK was developed many decades ago and was based on the idea that the moving train is much more difficult to hit the enemy, therefore, it will become a serious element of nuclear deterrence.

The expert noted that a similar principle made submarines (submarines, submarines) equipped with SLBMs the most effective nuclear deterrence tool. Since they "can roam the vast expanses, being under water." In turn, the masking of the "ghost train" will be carried out due to its visual "merger" with the usual railway traffic.

The author explains that only by the end of the 1980s in the USSR, the solid-fuel ICBM RT-23 UTTKh Molodets was finally developed, which was shorter than previous ICBMs (according to NATO classification - SS-24 and Scalpel, developed by Design Bureau "South" (Dnepropetrovsk, Ukrainian SSR) and adopted for service in 1987). At the same time, the "ghost train" was pulled by three standard diesel locomotives, and Soviet specialists managed to create a device that pushes overhanging power cables.

According to the author, in the Ukrainian Soviet Socialist Republic (Ukraine), 12 such BZHRK were created, which stood on combat duty in the period from 1987 to 2002. At the same time, the American satellites only partially managed to track their movements. After that, the Pentagon set about developing its own version of the “ghost train,” but the end of the Cold War led to the closure of this project.

After the collapse of the USSR, sixty-two ICBMs RT-23 UTTH Molodets were in Ukraine for some time. But in 1994 they were transferred to Russia. Moreover, the BZHRK were decommissioned in the period 2003-2005 and some of them are now museum exhibits.

The author is surprised that as soon as the Pentagon set about developing the US missile defense system and the “Fast Global Strike” program, it “caused paranoia in Moscow.” According to the author, this is what prompted Russia to make large investments in improving its system for delivering nuclear weapons.

After that, in 2012, the Moscow Institute of Heat Engineering began to develop the successor to the “ghost train” called “Barguzin”, named after the violent winds of Lake Baikal. The new BZHRK planned to use a lighter rocket RS-24 "Yars". But in December 2017, it was announced that the development of the BZHRK was stopped. Moreover, the project can be quickly revived if necessary.

In addition, the author noted that in December 2015, China tested the Dongfeng-41 (East Wind) ICBM. He suggested that the Chinese "comrades" are developing their own "ghost train", modeled on the Soviet one.
Ctrl Enter
Noticed oshЫbku Highlight text and press. Ctrl + Enter
We are
Hypersonic Weapons: Russia Confidently Holds Leadership
Russian nuclear engine will not leave a chance for Ilona Mask
Reporterin Yandex News
Read Reporterin Google News
Ad
The publication is looking for authors in the news and analytical departments. Requirements for applicants: literacy, responsibility, efficiency, inexhaustible creative energy, experience in copywriting or journalism, the ability to quickly analyze text and check facts, write concisely and interestingly on political and economic topics. The work is paid. Contact: [email protected]
15 comments
Information
Dear reader, to leave comments on the publication, you must to register.
I have an account? Sign in