Users rated the published APU video with many tanks 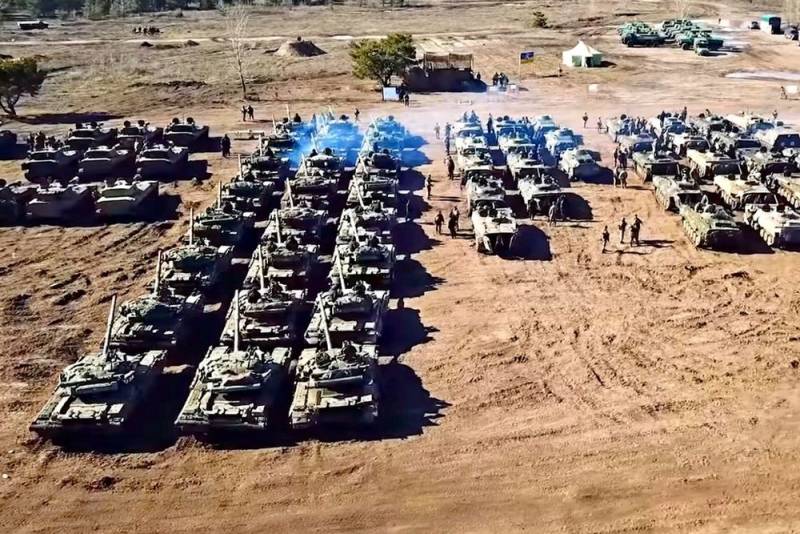 The Ukrainian portal Defense Express decided to demonstrate the "combat readiness" and "superiority" of the Armed Forces of Ukraine (AFU) compared with the "totalitarian" and "ostentatious" army of the USSR. For this, the Ukrainian "patriots" even shot a short video, which they pass off as "evidence".


It should be noted that the video shows one of the mechanized brigades of the Armed Forces, which conducted a control practical lesson at one of the training grounds. After which it was concluded that the Armed Forces are ready for hostilities as never before. At the same time, an accent was made to the uninitiated public that the drill was the main element in the Soviet army. So Ukraine with "European dignity" has finally "overcome" this relic of the past.


In turn, Web users have already commented on this video, which clearly demonstrates the "strongest on the continent."

The structure of the mechanized brigade of Ukraine nominally includes (I didn’t find or search for specific numbers, I took it from Wikipedia): 3,3 thousand people, 53 tanks, 100 BMPs, 4 armored personnel carriers, 70 trucks, 59 special cars., 36 sau, 18 RSZO grad, 44 air defense vehicles. Chet did not see so many people and equipment... At the same time (I’m not special) there are signs of different units on the equipment ... in the video 10 + 21 tank, 18 sau, 6 MLRS, air defense are not at all, you can count the number of service vehicles on fingers (all kinds of kungs are like that, for extras) . 53 + 20 BMP. In general, they stand in heaps, and you can immediately find out which heap belongs to which unit and how much is staffed. I think, who wanted, counted and wrote down for a long time
- Asus1 Asus2 user reported.

Images from the movie "Landing in Normandy"
- joked Alex Bourne.

Like in the 95th quarter. Did you buy tanks? I bought it. But they are broken ... Selling. Who do you sell broken tanks to? I will buy...
- recalled user Gesheft.

I greet you ... Mr. Syrsky, I do not argue about your words, but I completely disagree with regard to this particular brigade ... I served there for three years, and I know firsthand how these “Commanders”, as you call them, can manage , or come to the rescue when you need it ... with uv.
- Anton Tupikov drew attention.

Technology all of 80 years unfortunately where are the evacuation vehicles? (on the video I saw already one) Where are the helicopters and support aircraft ... where are the drones for support and artillery control, or we continue to shoot nowhere in the old fashioned way. Turkey even showed that guided artillery shells + illumination of targets by drones give an almost 100% chance of hitting a target. I understand that in comparison with 2013, where they sawed tanks for spare parts, this is already progress, but not so much that it was wow especially on a scale of 6 years. Moreover, the experience of Turkey says that for the effective work of drones, in addition to expensive and efficient cars, you need to have a bunch of (at times a large swarm) of cheap cars that will create a bunch of false targets for the air defense system, so that they can be substituted by air defense and shock drums. After air defense neutralization, work with more expensive ala strike aircraft
- says Ripper.

It’s wonderful that fighting efficiency has been restored! But unfortunately 90% of the technology is simply the “USSR”
- Alexander of Macedon expressed his opinion.

Well done, keep up the good work, I hope the team will reach Moscow. How are I going to show you the flashlight the road. Carthage must be destroyed, the evil empire must be destroyed
- summed up Genosse Horst.

Well, and we, in turn, will be looking forward to the next revelations of the “army window dress” of the times of the USSR from our Ukrainian neighbors aspiring to NATO. After all, President Vladimir Zelensky must demonstrate to the “nation” that the doctrine of “army, mov (language), faith” has not gone away with the departure of Petro Poroshenko. Consequently, Kiev is not going to stop the war in the Donbass, because such videos just increase militarism in Ukraine.
Ctrl Enter
Noticed oshЫbku Highlight text and press. Ctrl + Enter
We are
New taxes and more expensive parcels: what awaits Russians in 2020
US State Department: Venezuelan Civil War Scenario Ready
Reporterin Yandex News
Read Reporterin Google News
Ad
The publication is looking for authors in the news and analytical departments. Requirements for applicants: literacy, responsibility, efficiency, inexhaustible creative energy, experience in copywriting or journalism, the ability to quickly analyze text and check facts, write concisely and interestingly on political and economic topics. The work is paid. Contact: [email protected]
8 comments
Information
Dear reader, to leave comments on the publication, you must to register.
I have an account? Sign in