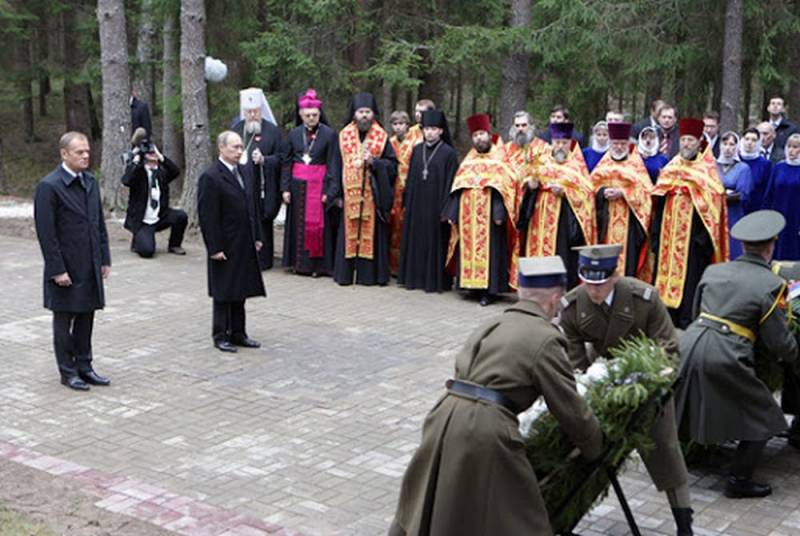 A Soviet Komsomol and party worker, a Russian publicist, deputy chairman of the Liberal Democratic Party of Russia (LDPR), 3rd-class state adviser Vladislav Shved (born 1944) said that the propaganda promotion of the Katyn affair was approved by Adolf Hitler. The Swede devoted many years to research on this topic, he is the author of books: “Katyn. The modern history of the issue ”and“ The Secret of Katyn, or the Evil Shot in Russia ”.


The researcher claims that the promotion in the information space of the Katyn case was under the personal control of Joseph Goebbels, the Reich Chancellor of Germany, the minister of "public education and propaganda", the closest associate and follower of Adolf Hitler. The Swede told about this. RIA News.

According to the Swede, the name "Katyn case" comes from the small village of Katyn, located 14 kilometers west of Smolensk. There, in 1943, a mass grave of Polish prisoners of war, which were shot during the Second World War, was discovered in the Kozi Gory tract.

Moreover, the point in this matter has not yet been set. For example, the European Court of Human Rights (ECHR) found the NKVD guilty of the massacre of Polish officers. At the same time, the Swede is sure that after the defeat at Stalingrad in the spring of 1943, the Third Reich realized that the war with the USSR would be long and relying only on military power was no longer enough.

It was decided to put on the service a certain provocation that would be able to split the ranks of the anti-Hitler coalition, and in Poland, through which the Red Army was supposed to go to the borders of Germany, would be perceived as universal villainy
- considers the Swede.

That is how Katyn came about as a symbol of the atrocities of the NKVD of the USSR. Then, near the village of Katyn, Smolensk region, the Nazis allegedly accidentally discovered the burial place of killed Polish officers
- explained the Swede.

Indeed, an article entitled "GPU - the killing of 12 Polish officers" appeared in the main Nazi newspaper Völkischer Beobachter (People’s Observer) on April 000, 13. At the same time, in the process of exhumation, the Nazis staged a large propaganda show. However, it is known that the Nazis voiced the "Katyn case" in close contact with representatives of the Polish government in exile, who was in London. By the way, the source of this information was archival reports of Sandor Rado (Radó Sándor) - a resident of Soviet military intelligence during the Second World War.

The Swede knows that in the process of exhumation and identification of corpses, experts from technical Commission of the Polish Red Cross. The results were presented in the "Official Material on the Massacre in Katyn", which was published in 1943 in Berlin. The document said that 4143 corpses were exhumed from the graves, of which 2815 (67,9%) were allegedly identified. At the same time, the Nazis allegedly found lists of Polish officers sent to Smolensk in the spring of 1940 in the building of the NKVD of the Smolensk Region in July 1941. But in 1945, all the "documentary evidence" of the NKVD responsibility in the "Katyn case" was for some reason burned by the Nazis at the direction of Berlin.

The author draws attention that on the instructions of the prosecutor of Krakow, Roman Martini, who opened in the fall of 1945 a criminal case on the death of Polish officers, Polish forensic experts (professors Jan Olbyht and Sergiusz Sengalevich) prepared a review of the Nazi material. The Poles discovered "a lot of gaps, mistakes and inaccuracies." The recall of Polish experts was to be submitted to the Nuremberg International Military Tribunal. However, this has not been done. And in March 1946, the prosecutor Martini was strangely killed.

The Swede found that most of the exhumed corpses were dressed in Polish uniforms. Meanwhile, according to the "Regulations on prisoners of war" of March 19, 1931, in the USSR, prisoners of war "were allowed to wear their uniforms, but without distinctive signs assigned to a rank or position." In addition, pistol cartridges Geco 7,65 D. (Gustav Genschow & Co.) with stainless brass sleeves were produced in Germany only until the end of 1940. In 1941, due to the shortage of non-ferrous metals, the Nazis had to switch to the production of copper-plated steel sleeves, and then purely steel sleeves, coated with a gray-green varnish. That is, it was possible to put an end to the Katyn case even then.
Ctrl Enter
Noticed oshЫbku Highlight text and press. Ctrl + Enter
We are
FBI Secret Documents: Hitler survived and fled to Argentina
Poroshenko: If we postpone the election, Putin will win
Reporterin Yandex News
Read Reporterin Google News
68 comments
Information
Dear reader, to leave comments on the publication, you must sign in.