Are the Turks able to arrange the Mediterranean Tsushima Russian fleet 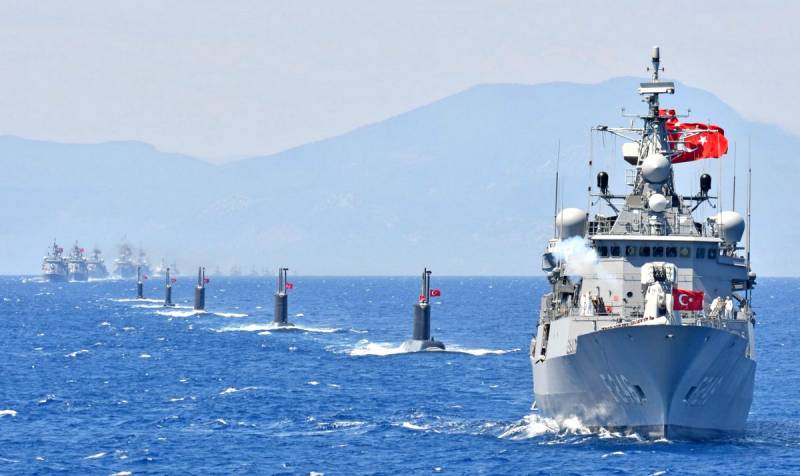 Today, negotiations between the Russian and Turkish presidents to resolve the situation in Idlib should be held. Most domestic experts and political scientists are inclined to believe that the parties will be able to find a compromise solution that will not allow a direct military conflict to happen between Moscow and Ankara.


The Kremlin’s argument in the negotiations is the dispatch of two Admiral Series frigates equipped with Caliber cruise missiles to the Mediterranean Sea to the coast of Syria. A patriotic public relishes the possibilities of our naval power. But what in reality can our union in the Eastern Mediterranean expect if the situation nevertheless goes “apart” and the Turks and American allies start fighting with us “without fools”?

About how Russia, the USA and Turkey are building up their groups near Syria, we detail We wrote earlier. Let’s try to figure out what can really be expected from our fleet “beyond the three seas”, and how much today our Navy meets the challenges of the time.

The strongest warships in the formation are the three frigates of the 11356P series, so we will dwell a little more on their advantages and disadvantages. This series is a modified, or rather, a simplified version of the export version of the frigate for India under the name Talwar. Unfortunately, simpler in this case does not mean better.

A universal naval firing complex on it is simpler than similar in Indian requirements. The launcher is capable of receiving only Caliber cruise missiles in an amount of not more than 8 pieces per frigate. The ships lack a towed sonar station (BGAS), which drastically reduces its ability to counter enemy submarines. This is a rather strange decision, given that the main purpose of the ship is the fight against submarines.

So, we have three weakened frigates in foreign waters, having in total a maximum of 24 cruise missiles on board. To put it mildly, not a lot. Plus, in the Mediterranean Sea we have two Varshavyanka submarines, each carrying 4 Caliber. Total 32 cruise missiles per salvo.

For comparison, now the Syrian Navy is headed by the Eisenhower aircraft carrier. He is accompanied by two Ticonderoga class missile cruisers and three Arly Burke class destroyers. There are several sub-series of American destroyers, in some trim levels they are capable of carrying up to 97 Tomahawks. By peacetime standards, one Arly Burke has an average of 32 cruise missiles, that is, how many Caliber we have in the Mediterranean Sea.

There are three such destroyers there now. Plus to them - two missile cruisers of the Ticonderoga class. Each of them has 122 launch cells, of which 26 are Tomahawks. Plus, somewhere under the water, an Ohio class submarine with 154 Tomahawks and 5 Trident II D24 ballistic missiles is hiding. Well, the aircraft carrier Eisenhower himself with his wing.

The balance of power, to put it mildly, is not in our favor. And we still did not consider the Turkish fleet. The Turkish Navy is objectively the strongest in the region, dominating both the Black Sea and the Mediterranean. Against our three weakened frigates, Ankara will now display 16 of its frigates of German and American projects, which are capable of sending 96 missiles in one gulp. In addition, 13 submarines equipped with the most modern torpedo weapons and sonar systems will be put up against our two Varshavyanka.

If you call a spade a spade, then our formation in the Mediterranean is enough for 1 missile salvo, after which the frigates will somehow have to try to dodge the enemy’s missiles and torpedoes. How it will end up for them is not difficult to guess. In the event of a war with Turkey, we will get our “Tsushima”, frankly speaking.

Therefore, one must be friends with one’s head, and everyone who is eager to “wet the Turks”, tapping their fingers on the keyboard, should sign up as a volunteer in the Syrian army and go to help Assad liberate Idlib. The maximum tasks that can be set for our formation near the coast of the SAR is the cover of the Russian contingent in Khmeimim.

And it would be nice to think about why the real combat capabilities of our Navy are so limited. Why was the construction program of far more powerful frigates of the project 22350 disrupted? Why, instead of the analogues of the almost universal “Arly Berks”, the foundations of the US Navy, are we building small missile ships that are not able to effectively resist enemy submarines? Why is the torpedo armament of our Varshavyanka inferior to modern Western models? Why are our patrol ships relatively weakly armed?

All these questions are worth looking for answers.
Ctrl Enter
Noticed oshЫbku Highlight text and press. Ctrl + Enter
We are
Ukraine from the inside: traitors, curators and those who watch from the Kremlin
Ten "defeats" of Putin
Reporterin Yandex News
Read Reporterin Google News
Ad
The publication is looking for authors in the news and analytical departments. Requirements for applicants: literacy, responsibility, efficiency, inexhaustible creative energy, experience in copywriting or journalism, the ability to quickly analyze text and check facts, write concisely and interestingly on political and economic topics. The work is paid. Contact: [email protected]
76 comments
Information
Dear reader, to leave comments on the publication, you must to register.
I have an account? Sign in