Failure of a turbine agreement: why Russia and Siemens diverged 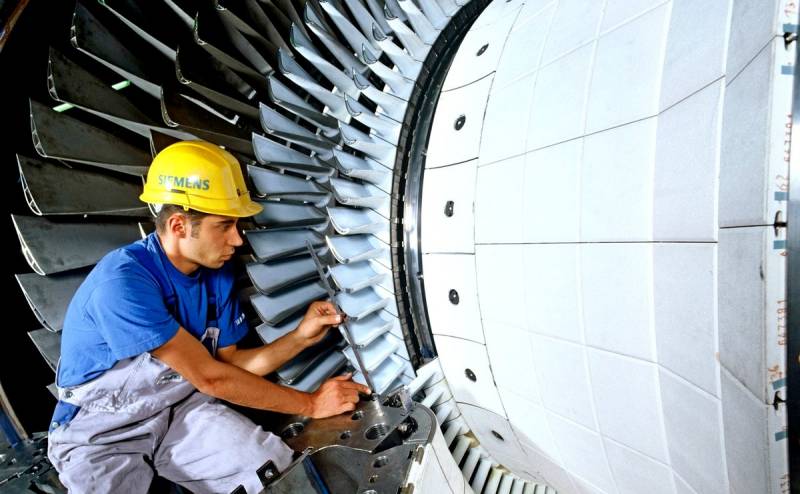 On the eve it became known that Alexey Mordashov's Power Machines decided to leave the joint venture with Siemens for the production of high-power gas turbines. Earlier it was reported that the German concern is ready to transfer Technology and 100% localize the production process in Russia. What went wrong?


First of all, we need to figure out where the domestic high-power gas turbines, which were developed in the USSR, have gone. This is a typical sad story of the collapse and squandering of Soviet technological heritage.

As you know, in the framework of the "program of oppression of Ukrainians" Moscow has invested enormously in the development of science and industry of the Ukrainian SSR. Including, it was there that the most developed gas turbine building was acquired, which was inherited by Independent after the collapse of the superpower. So, the GTD-110 series turbine was developed by the Ukrainian company Zorya-Mashproekt by order of RAO UES in the early nineties.

In total, 5 units were produced, they did not show themselves too well, and many defects were revealed. In general, this situation is not something extraordinary, since all high-power turbines have "childhood diseases". It is considered normal for foreign competitors to start mass production only from 6-8 in the installation account, since the former actually test them and eliminate the identified shortcomings. For a number of reasons, the GTD-110 did not give such a chance.

The government decided to proceed with the purchase of imported gas turbines, mainly in Germany. Domestic factories that could be engaged in their own development, switched to the production of some components for them. According to the Ministry of Energy of the Russian Federation, more than two and a half hundred foreign power plants of large capacity operate in our country, which is 63% of the total. Subsequent events showed the unreasonableness of such policy.

After the Maidan, technological cooperation between Ukraine and Russia began to curtail. Bypassing EU sanctions, SGT5-2000E Siemens Gas Turbines were delivered to the Crimea, slightly modified with a “file”. Because of this, there was an unpleasant scandal with the Siemens concern. The Germans even wanted to leave, slamming the door, but could not force themselves to abandon the Russian market. High-power turbines are piece goods and expensive, there are not many buyers for them all over the world. In addition, an energy modernization program has been announced in Russia that will require hundreds of new power plants. In an effort to take its share in it, Rostec tried to test the GTD-110M turbine, but it was seriously damaged during the tests.

It would seem that now everything is fine: at the end of 2019 it was reported that the GTD-110M, after repair in test mode, had already worked over 3 thousand hours, and Siemens itself proposed transferring turbine production technologies to Russia. It was announced that by 2020 the joint venture of the concern and Power Machines would bring domestic components to 60%. But then strange movements began. So, initially the shares of the Russian and German sides in the joint venture were 60% and 40%, respectively. But then Siemens increased its, bringing it to 65%. Just about the sale of the remaining 35% and announced on the eve of Power Machines.

Why did the structure of Alexei Mordashov decide to abandon such a profitable cooperation?

Sources in the company report that Siemens, despite the promise to transfer all technologies, refused to do so for political reasons. And this is a very serious problem, proving that it is simply dangerous to rely only on imported suppliers under the conditions of sanctions. There are many ways to insert sticks into the wheels of Russian power plants.

At first, physical localization of production does not mean the transfer of intellectual property rights. So, for example, South Korea at one time "got" in collaboration with Westinghouse. The Koreans localized the entire production cycle of the nuclear power plant, hoping to recoup it through exports. But US regulators simply banned the use of their technology.

Secondlyfull localization in the context of globalization is not an easy task. There are foreign suppliers of the first level, there are second level. Siemens may not agree to endure the entire cycle, and US sanctions can take any second-level supplier out of the game. In practice, this will lead to a delay in the implementation of the modernization program for the Russian energy sector.

ThirdlyIf Russia gets all the technology, it will become a direct competitor to Germany and the USA in a very close market, where everyone is pushing their elbows. Will they allow us to do this voluntarily? Hardly.

For these reasons, betting only on Siemens is very dangerous. But this coin has a downside. If you rely only on domestic manufacturers, then with a high degree of probability all the deadlines will be disrupted, and the cost of the project will constantly grow. Unfortunately, we do not have experience in implementing such a high-tech project. Candidate of technical sciences Valery Neuymin draws the following analogy:

It’s the same as instructing an unknown company to develop a spaceship, because a gas turbine is by no means a simple thing.
According to the expert, one should not immediately rush to make a high-power turbine. It is worthwhile first to make a power plant of medium power, for example, at 65 megawatts, “get your hand in it,” put into series. And only then move on to high-power power plants. Otherwise, the money will simply be thrown to the wind. By the way, about the money. Initially, Power Machines requested a subsidy from the state in the amount of 5 billion rubles for development, in addition to its own funds. Now the project has risen in price, and is already valued at 17 billion, and Mordashov’s company is waiting for a corresponding increase in budget financing.

This does not mean that the request should be ignored: development is a complex, long and costly process. But you should not let the business turn into a “technological unfinished building” at the expense of the state. In order to avoid, perhaps, it is worth taking the advice of the mentioned expert Valery Neuimin, who believes that it is necessary to create at least two competing industries. Well, so that "do not relax." In Soviet times, this scheme proved to be excellent, for example, in aircraft manufacturing and helicopter engineering.
Ctrl Enter
Noticed oshЫbku Highlight text and press. Ctrl + Enter
We are
Suspicious generosity: Siemens is ready to give its technology to Russia
The new Russian high-power turbine failed
Reporterin Yandex News
Read Reporterin Google News
Ad
The publication is looking for authors in the news and analytical departments. Requirements for applicants: literacy, responsibility, efficiency, inexhaustible creative energy, experience in copywriting or journalism, the ability to quickly analyze text and check facts, write concisely and interestingly on political and economic topics. The work is paid. Contact: [email protected]
10 comments
Information
Dear reader, to leave comments on the publication, you must to register.
I have an account? Sign in