The return of foreign assets of the USSR: what is at stake 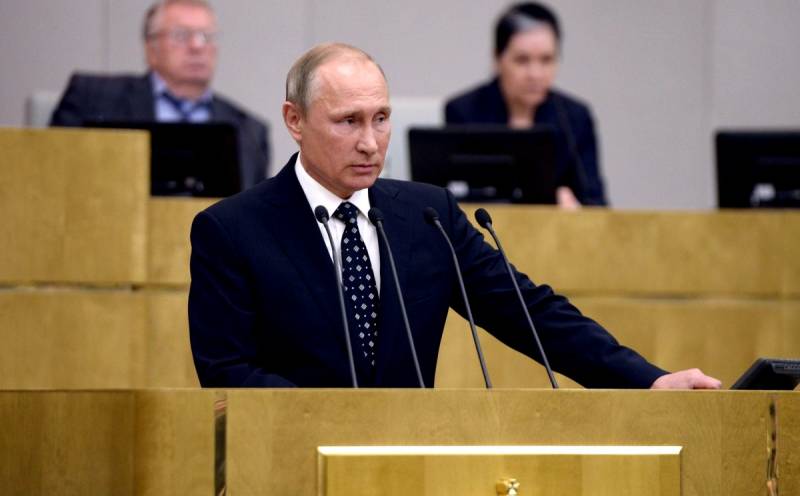 Raised first by Russian President Vladimir Putin, and then supplemented by his press secretary Dmitry Peskov, the question of our country’s non-receipt by right of the assets of the Soviet Union due to it abroad located in fact is much deeper and wider than the Kremlin’s short claim, which fit in just a few sentences .


However, before you deal with it in essence, you should first start by recalling: what kind of debts are these, where they came from and why, how they were paid. And also to clarify - who specifically from the "post-Soviet republics" in this situation behaved decently and honestly, and who showed the blackest ingratitude. Only after that it will become possible to come to an understanding of the essence of the problem and the reasons why today it is voiced at such a high level.

Our debts are heavy

The question of where the Union of Soviet Socialist Republics came from, a country with a powerful and extremely developed national economy, suddenly had "enormous debts", which our country had to pay off almost until now (the last part of the external debt is owed to the long-existing Yugoslavia , was paid to Bosnia and Herzegovina in 2017), is itself quite interesting. Speaking on this topic, domestic liberal economists invariably argue that the reason here is a sharp drop in oil prices, which occurred in the 80s of the last century and forced the Soviet Union to make loans for the purchase of the most necessary items - grain and food. In fact, this corresponds to a fairly small extent. Yes, the external debt of the USSR began to grow in 1984, immediately increasing by 300% - from 5 to 15 billion dollars. However, all this was a mere trifle in comparison with what happened after 1986, which was marked by the coming to power of Mikhail Gorbachev. The credit dependence of the Soviet Union began to grow just like a snowball - in 1989 we owed foreign lenders $ 50 billion, and by the time of the collapse of the USSR, this figure “overwhelmed” for $ 100 billion! Mikhail Sergeyevich and his "team", ditching the economy countries with their stupid and frankly treacherous "reforms" drove our homeland into a debt hole without any twinge of conscience. And, of course, to the tremendous joy of their "friends" and hosts from the West. The largest creditors of the country ultimately became the state of the so-called "Paris" and "London" clubs.


Naturally, these included the most developed and richest countries of the capitalist world: the USA, Great Britain, France, Germany, Japan. They then “helped” us ... to drive a great country into the grave. And then, of course, they demanded the money due for this. Not only that - Gorbachev, from the “great” mind, managed to take over the debts of tsarist Russia also on the USSR, all of which his predecessors as Secretary General categorically refused to acknowledge. First, in 1986, this was done in relation to Britain, and then a similar “broad gesture” worthy successor to Gorbachev’s business, Boris Yeltsin, was already repeated with France. At the same time, these figures did not think to raise questions about the colossal sums from the treasury of the Russian Empire that “hung” in Western countries during the First World War as payment for military supplies, which remained unfulfilled. Of course - suddenly the "white gentlemen" will be offended, or even anger? However, the USSR’s debts to the “sharks of capitalism” were far from the entire volume of the credit burden that fell on Russia as its successor. A key joke with our country here was played by its key role just in the socialist camp. The desire to help their allies and partners in organizing the Council for Mutual Economic Assistance in every possible way “came around” to Moscow with an overwhelming burden of debts to them, which yesterday's “friends” did not want to forgive in any way. And this is despite the fact that the very existence of a good half of them on political the world map was paid for with the blood and lives of hundreds of thousands of Soviet soldiers, and later the USSR made a huge contribution to overcoming the post-war devastation by countries of the same Eastern Europe. Indeed, the debts of our country to the CMEA member countries themselves arose solely because the consumer goods received from them in exchange for Soviet weapons or energy resources were estimated to be significantly higher than the real value, while the price of our supplies was artificially lowered.

Who should - we forgive everyone

However, the sharp “amnesia”, pretty much “implicated” in the most ordinary greed, which swept over the “socialist camp countries” after 1991, cannot be compared with the boundless and unscrupulous cynicism that was manifested by most of the “fraternal republics” of the collapsed USSR yesterday. In their capitals, they did not object to the fact that Moscow would assume all the debts of the Union. But with regard to what was already owed to her herself, questions instantly arose. Generally speaking, "wisely" talk about who, how much and for what exactly should be conducted after a competent inventory and evaluation in the "post-Soviet space" of every single object that had the status of "All-Union construction projects." The industrial “giants”, the energy and transport infrastructure, and, often, a significant part of the housing stock in the Union republics, invested unlimited resources and resources throughout the USSR, not to mention the fact that the construction and commissioning of factories, factories, power plants and Railways worked specialists from all over the country. In my deep conviction, any material claims on the part of the newly-born “non-brothers” should have been smashed to smithereens about the numbers of investments in their economies made over the years of their membership in a single state. However, who would do this in the 90s? Yeltsin? Gaidar with Chubais ?! That's right, I, too, amused to tears ... In the end, Russia, having become the rightful successor of the USSR, received a seemingly advantageous “inheritance”. But that’s how it looked only at first glance. It would seem that the amount of $ 100 billion in public debt was more than overlapping with loans and loans that the USSR itself provided for all 150 billion. However, with this money everything was not so simple.

As mentioned above, the creditors of the USSR were rich, strong states, moreover, united in the military-political bloc of NATO, which since the collapse of the Union has occupied an absolutely unquestioned dominant position on the planet. And who owed us? Basically, the "developing" countries, which, by and large, had nothing to take in payment for long overdue loans. Cuba, Vietnam, Mongolia, Ethiopia, Iraq - this is not an exhaustive list of those to whom Russia as a "manifestation of goodwill" (and, in fact, rather, from hopelessness), wrote off the colossal funds for which the Soviet Union was once provided military and economic assistance. One can only hope that someday this generosity will be “converted” into various geopolitical benefits for our country ... However, there is another “profitable item”, which is quite concrete and tangible. This is a more than significant list of objects of the same diplomatic property owned by the Soviet Union abroad. Here they are, all, without exception, were to become the property of Russia, since it undertook to pay Soviet debts. Moreover - at the moment, at one time, it was completely civilized, agreed and documented by interested states. Even before the Soviet Union collapsed, an official meeting was held in Moscow, in which representatives of both 7 states - the country's most significant creditors, and most of the Union republics took part. Only Uzbekistan and the Baltic states refused to participate outright.

Ukraine - in its role

In the process of this summit, it was decided that the successors of the USSR, and, accordingly, its debts, would become ALL republics without exception. This situation was first recorded in the memorandum of 28.10.1991/61,34/16,37, and then, a month later, in the official intergovernmental communiqué. Debts and foreign assets of the Soviet Union were divided in agreed proportions, according to which Russia accounted for 4,13 percent of them, Ukraine accounted for 1997%, Belarus - 2009%. Well, and so on - on the list. Nevertheless, such a situation was categorically disadvantageous, first of all, to the West. It is one thing to settle accounts with one debtor, and quite another to dozen. In addition, they ran away like mice in holes and desperately proving that their national “hut" was on the edge. Moreover, as it becomes clear only now, the West probably had as their goal to create the maximum load just on the economy and financial system of Russia, without taking the rest of the republics seriously. One way or another, but in the end it was Moscow that came up with the proposal: “You give us rights to all assets abroad, and we give you freedom from any debt obligations!” I must say that such a proposal was received more or less favorably everywhere. Except for Kiev ... The Ukrainian parliament twice, in XNUMX and XNUMX, failed miserably to ratify the corresponding “zero option” agreement. In the latter case, the deputies of the Verkhovna Rada began quite frankly “turning on the fool”, stating: how, they say, can be signed if “no one understands what and how to count”? In fact, everything is perfectly understandable and completely clear, however, the well-known toad, which is for “unplaced”, in the opinion of many, a real national symbol, presses and crushes everything ...

Today, Ukraine remains the only post-Soviet republic that has not agreed to a fair “zero option”! Even Georgia, which rested on the last, in 2002 managed to "finish off." Kiev, on the other hand, is simply taking a wonderful position: Russia has already distributed its debts, so why not waggle now ?! In the end, this led to the fact that our country, which decided in 2006 to finally engage in legal re-registration of foreign assets of the USSR to itself (this became possible only after the full repayment of loans made by the "Big Seven"), faced in a number of states with a refusal: “First, resolve the issue with other possible applicants, and only then - we are welcome!” As of 2015, as far as it is known, our country is recognized as the full property successor of the USSR only in Sweden, Finland, Iceland, Bulgaria and Hungary. And even in these countries it was necessary to negotiate with Ukraine, "paying off" part of the Soviet real estate. In more than 30 countries, the question remains open - so that, with all due respect to Mr. Peskov, we are in no case talking about “one or two” countries or “slightly larger” numbers. The problem is quite serious and widespread. And by the way, if someone thinks that such an impudent and boorish attitude towards fulfilling obligations to Russia arose in the “unbroken” after the last “maidan”, then he is mistaken very deeply. Let me remind you that in 2010, none other than Ukrainian President Viktor Yanukovych declared the non-recognition of “Moscow’s claims to receive all the property of the former USSR abroad”. Yes, yes - the one that has been hiding in our Rostov for more than five years. It is clear that they don’t want to hear about the payment of Russia’s share of Soviet foreign debts as the first step to the subsequent “division of property” in Kiev all this time ...

I really want to believe that the claims made by Vladimir Putin were a very concrete signal to a very specific country, which has recently, with great enthusiasm, begun to “knock out” the growing “debts” from Russia and bring millions, or even billions, lawsuits against it international courts. Since we are going to make our country a country “truly sovereign” and strengthen its position in the world, it would be nice to start this good deed in order to replace some particularly greedy impudent people.