The renewal of Russia's nuclear icebreaker fleet has become a problem 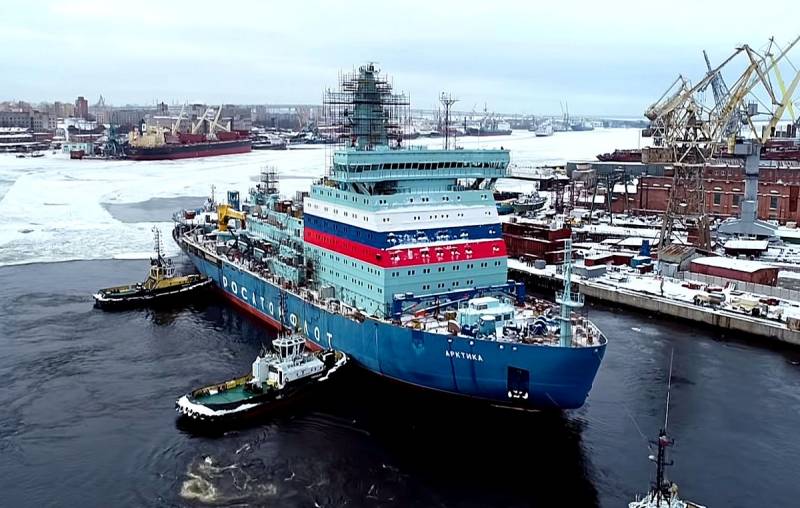 The other day, Rosneft presented to President Putin a megaproject for the development of Arctic fields called Vostok Oil worth 10 trillion rubles. The extracted resources will be exported through the Northern Sea Route (NSR), which will require an efficiently functioning icebreaker fleet. But, as it turned out, we are planning serious problems with its modernization.


Today, Russia has the most powerful icebreaker fleet in the world, inherited from the USSR. However, most of its vessels are very old, and they need to be gradually replaced in order to guarantee entry through the NSR. A significant part of the Atomflot icebreakers has already been decommissioned, so great hopes are placed on the nuclear powered icebreakers of Project 22220 Arktika.

The Arctic is a series of icebreakers of the future LK-60YA, that is, 60 megawatts with a nuclear installation. They are capable of breaking through ice three meters thick and must navigate caravans along the Northern Sea Route. The big advantage of the vessel is its two-draft design: the icebreaker will be able to work both in the ocean and in river beds, replacing two types of existing icebreakers at once. The lead ship of the series is the Arctic of the same name, laid down in November 2012. It will be followed by similar Urals and Siberia.

This is where the positive ends, and our realities begin. The deadlines for the "Arctic" are regularly broken: it was supposed to be commissioned back in December 2017. As of the end of summer 2019, the readiness level of the first vessel of the series was 87,7%. And now, during mooring tests of the icebreaker, an emergency occurred with damage to the electric motor. In the worst case, the repairmen will have to cut the hull and dismantle the equipment, which obviously will not shorten the time for acceptance of the vessel into Atomflot.

Representatives of the United Shipbuilding Corporation reassure in the spirit that malfunctions are the norm, nothing extraordinary happens, you should not worry about “trifles”. However, a careful examination of the problem reveals that the cause of endless delays and malfunctions is the notorious inefficiency of the management system.

The decision in itself to create a series of modern icebreakers is welcome. It is also encouraging that the order was given to the Baltic Shipyard, which in recent years has been quietly bending, standing on the verge of bankruptcy. The company received funds (the tender was estimated at 47 billion rubles), leased equipment, and began to pay workers a decent average salary. But then everything went awry.

Vyacheslav Filyurin, the trade union leader of the Baltic Shipyard, names the following reasons for the delay:

At first, no matter how wild it may sound, the shipyard, which has been building construction for seven years, to this day does not have the full documentation for it developed by the Iceberg Central Design Bureau.

Secondlysuppliers continuously fail, leading to downtime and longer lead times. According to Filyurin, Kirovsky Zavod shuttled the delivery of engines for the icebreaker. There are big problems with other suppliers, which either drag out the deadlines, or even provide low-quality materials, which in the future have to be replaced. The union representative attributes this to the imperfection of federal law governing public procurement. According to him, preference should be given to those who offer the lowest price. Often, a low price translates into low quality.

Thirdly, Filyurin complains about the very “effective managers” who came to the plant together with the United Shipbuilding Corporation. Their high salaries make it possible to show a good average salary for workers easier:

On average, yes, about 82 thousand rubles a month. But this is taking into account the salaries of the white-collar workers. The corporation has imposed on the plant many different structures involved in, as we are told, management. Their “creativity” is paid more than generously. There is only little sense from her.

Together, these factors led to a delay in construction from five to eight years and a corresponding rise in the cost of the project. The result was that the plant was even more bogged down by a debt quagmire, a union representative explains:

The plant is in great debt. We survive mainly through loans. Loaned already "above the roof."

And now there have been serious engine problems on an almost-built icebreaker, which may have to be cut. In general, "efficiency" is off the charts.
Ctrl Enter
Noticed oshЫbku Highlight text and press. Ctrl + Enter
We are
Vostok Oil: the energy megaproject that Russia has been waiting for so long
Arctic "Ural": what are capable of new Russian icebreakers
Reporterin Yandex News
Read Reporterin Google News
Ad
The publication is looking for authors in the news and analytical departments. Requirements for applicants: literacy, responsibility, efficiency, inexhaustible creative energy, experience in copywriting or journalism, the ability to quickly analyze text and check facts, write concisely and interestingly on political and economic topics. The work is paid. Contact: [email protected]
27 comments
Information
Dear reader, to leave comments on the publication, you must to register.
I have an account? Sign in