Trump did not shake the speaker's hand, and she tore his speech into shreds 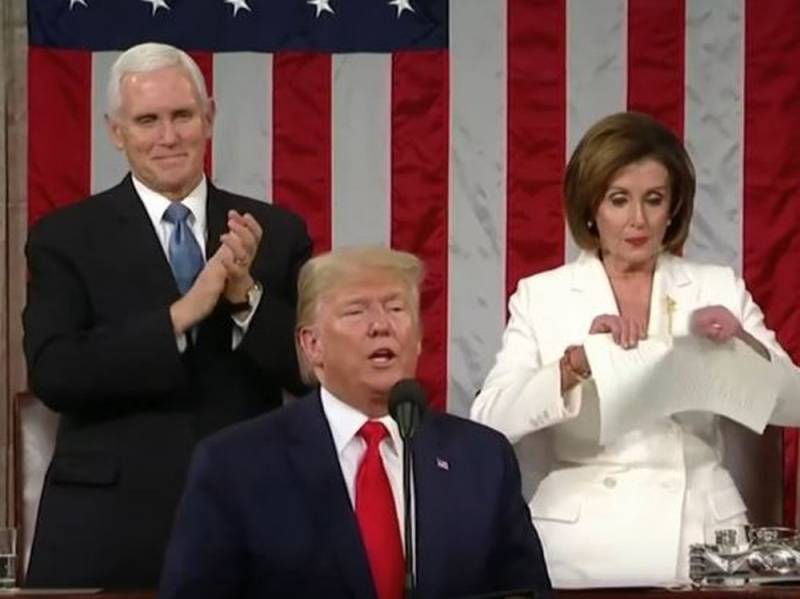 On February 5, 2020, US President Donald Trump entered the Capitol Building in Washington, where the US Congress sits as the winner. Before his annual appeal to Congress on the Situation of the Country, he did not even defiantly shake hands with House Speaker Nancy Pelosi, one of the initiators of the Trump impeachment process.


Trump rose to the podium and began to speak. When the president finished, Pelosi took a copy of Trump's speech from her desk and defiantly tore it up.

It was nice considering the alternatives
- said Pelosi, commenting on her act.

It should be noted that in his speech, Trump listed all the achievements of his administration. According to Trump, the construction of the wall on the border with Mexico has already led to a 75% reduction in illegal border crossings and increased drug seizures.

We have already completed more than 100 miles and by the beginning of next year we will have completed 500 miles.
- added Trump.

According to Trump, the United States is in a stronger position than ever before. After that, Trump began to describe other successes, focusing on the speech on the economy.

According to Trump, the number of jobs has increased in the United States. He stressed that since his election to the post, 6 million jobs have been created (5 million more than the representatives of Barack Obama predicted). Trump said that the unemployment rate among African Americans and veterans has reached the lowest point in US history, and for women - the lowest level in 70 years. At the same time, household incomes grew, and consumer confidence reached "new amazing heights."


By the way, Russia has already paid attention to the defiantly scandalous behavior of American politicians... Thus, according to the expert (American political scientist) Boris Mezhuev, which he told the newspaper Vzglyad, what happened in the United States reminded him of the relationship between the Supreme Soviet and the Russian government in the early 1990s.

Mezhuyev believes that Trump’s “demonstrative-political” speech itself was aimed primarily at voters. In his speech, Trump tried to demonstrate to the electorate his superiority over his opponents. That is, Trump decided to convince ordinary Americans of his success.

There are things that remain in the shade. It must be admitted that this administration has no foreign policy successes. Trump managed to escape the war, but can this be called a success. A mysterious deal with China, the details of which remain unknown. Trump did not say this, but showed what he can be proud of - economic growth and increased influence in the Middle East
- added Mezhuev.

Socialist attacks are designed to show that Bernie Sanders is the person Trump is most afraid of. But given the confusion after the failed caucuses (similar to the primaries - ed.) In Iowa, it’s not very clear who can claim anything at all. If the Democrats had any intelligible candidate, it is not known how this electoral confrontation could end. In the meantime, Trump's advantage is not in great doubt
- Mezhuev thinks.
Ctrl Enter
Noticed oshЫbku Highlight text and press. Ctrl + Enter
We are
U.S. House of Representatives Impeaches Trump
U.S. Congress speaks of impeachment Trump
Reporterin Yandex News
Read Reporterin Google News
6 comments
Information
Dear reader, to leave comments on the publication, you must sign in.