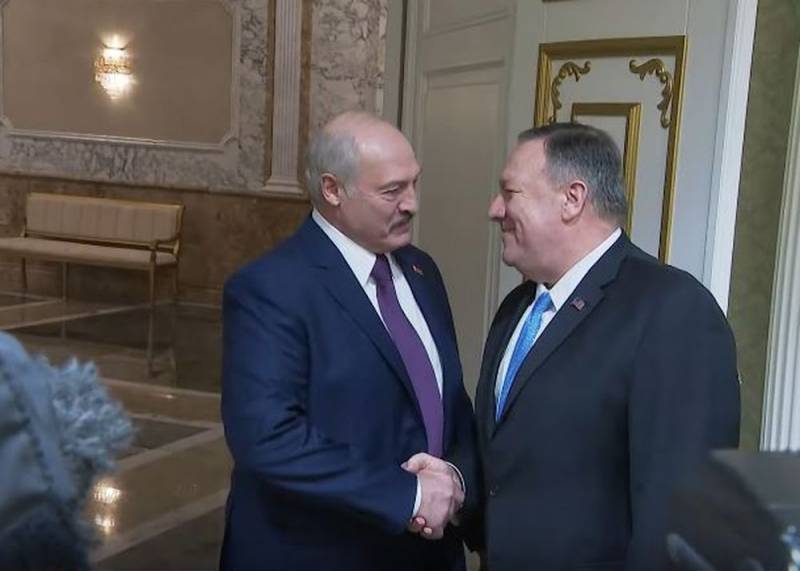 The head of the US State Department, Michael Pompeo, assessed his visits to Belarus, Kazakhstan and Uzbekistan. In his opinion, the trip was productive. He especially emphasized the importance of “peace, security and prosperity” of local residents.


Pompeo believes that Washington’s "partnership" with Belarus, Kazakhstan and Uzbekistan "has become even stronger after this visit." However, he did not specify when to expect another attempt at a “color revolution” in these countries. So it’s not in vain that Pompeo, speaking about these countries, bypassed Ukraine, where he also drove. After all, there the "dignity of the nation" has already triumphed.

It should be recalled that on February 1, 2020, Pompeo, at a meeting with Belarusian President Alexander Lukashenko, announced the US’s readiness to provide “100%” oil needs of Belarus. At the same time, Moscow considers the "ultra-close rapprochement" between Minsk and Washington unlikely.


It should be noted that "father" считаетthat Moscow has set Minsk as a "hydrocarbon cancer." Therefore, it is not surprising that Pompeo galloped galloped to Eurasia to coordinate the actions of the various countries surrounding Russia.

Unfortunately, we don’t know whether Lukashenko treated the head of the US State Department with pies and potatoes and whether he handed him a couple of bags of “national treasure” before departure, as he had brought to the Russian leader Vladimir Putin directly to the Kremlin, instead of the Union Treaty.

By the way, before this, Pompeo paid a visit to Kiev, where he was treated with lard and wrapped a piece of cloth in a rag on the road to Minsk. And after Minsk, Pompeo went to Central Asia for koumiss, for God forbid Tashkent will enter Eurasian economic Union (EAEU). At the same time, he is glad that the Ministry of Defense of Belarus has denied information about plans to create a NATO training center in the country.
Ctrl Enter
Noticed oshЫbku Highlight text and press. Ctrl + Enter
We are
Lukashenko is in talks with the United States on oil supplies
Lukashenko on the price of gas: Russia should help Belarus affected by Chernobyl
Reporterin Yandex News
Read Reporterin Google News
Ad
We are open to cooperation with authors in the news and analytical departments. A prerequisite is the ability to quickly analyze the text and check the facts, to write concisely and interestingly on political and economic topics. We offer flexible working hours and regular payments. Please send your responses with examples of work to [email protected]
2 comments
Information
Dear reader, to leave comments on the publication, you must sign in.