The trend is alarming: has gold begun to slowly “flow away” from Russia? 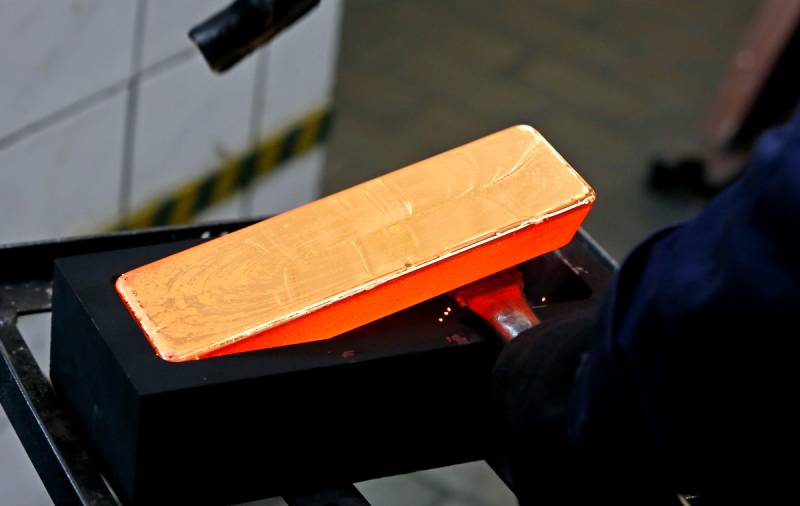 Gold has been a popular topic in the past couple of years economic News. The price of it is growing steadily, many countries are rapidly increasing their gold reserves. Russia is one of the champions in the pace of building up this precious metal. However, last year there was one bad trend that I would like to draw attention to.


Objectively, today there is a "golden revenge": the yellow metal, since ancient times a symbol of wealth, from which the most voiced and coveted coin was minted, begins to return to its former positions more and more quickly. But for this, he will have to push the dollar off his pedestal, on which he found himself as a result of numerous manipulations.

The expulsion of precious metals from monetary circulation began in 1971, when the US Treasury stopped exchanging dollars for gold stored in Fort Knox. In 1976, the gold standard was completely abolished, and the American currency turned into green paper, provided only with the military power of the United States. The yellow metal, which has been precious for thousands of years, has been artificially transformed from money into a regular exchange commodity.

Gold was not going to give up, and in 1980 it began to rise sharply in price, reaching $ 875 per troy ounce. To maintain the position of its paper dollar, the US Federal Reserve was forced to create a secret cartel of the largest central banks, which were supposed to play together to lower the cost of the yellow metal. An information campaign began against gold, financial instruments such as “paper gold” were invented, large volumes of this precious metal were thrown onto the market using various schemes.

In 1999, the cartel came out of the shadows. Several five-year agreements were signed between the largest central banks on the regular sale of gold in certain volumes. The Central Bank of Switzerland distinguished itself most in this field, having sold 1,17 thousand tons in the first five years. It was followed by the central banks of the United Kingdom and the Netherlands. In the next five years, France became the leader in sales with 572 tons, followed by the European Central Bank and the Central Bank of Switzerland.

But in 2009, everything changed due to the crisis. The cost of the precious metal exceeded a thousand dollars per ounce, and the golden trickle almost ran out. It became impractical to play against the market, and since 2014, former sellers began to increase its stocks again. In 2019, the next five-year period has expired, but there is no new agreement yet. And, most likely, it will not. There are several reasons for this.

At first, the world's largest central banks re-enabled printing presses, conducting the so-called "policies quantitative easing. " In other words, they began to print more paper money, while the key rates in the Central Bank began to decline to minimum values. This sharply increased the attractiveness of gold in the eyes of investors.

Secondly, the world clearly smells of an impending economic crisis, and even worse, given the situation in the Middle East. Investors also prefer to sit in gold.

As of today, this is 2271,31 tons. Such thrift is to be welcomed, but some oddities have appeared. One of the sources of replenishment of storage facilities is gold mining in Russia. But for some reason, the Central Bank began to curtail purchases in the domestic market. So, of the precious metal produced in 2018 in the country, only 16 tons went for export, and 95% remained in Russia. But already in the past 2019, 100,5 tons of gold left the country, that is, a third of the gold produced.

The trend is alarming, given that the cost of the yellow metal is only growing. In addition, the government torpedoed a bill according to which operations on the sale of gold bullion were to be exempted from VAT. According to the idea of ​​the document, the population should have received in the form of gold an alternative to the accumulation of dollars "under the mattress."

Recall that when Mishustin was the head of the Tax Service, VAT was increased from 18% to 20%. In some foreign countries, investment gold is not subject to VAT. For comparison, in China, whose gold reserve is the next largest after Russia, private investment demand for this precious metal is an impressive 61% of production. In our country, as of 2017, the share of private demand amounted to 1,3% of production. There is something to ponder.
Ctrl Enter
Noticed oshЫbku Highlight text and press. Ctrl + Enter
We are
Fort Knox Gold Vaults May Be Empty
Russia's introduction of a “gold standard” can save the world
Reporterin Yandex News
Read Reporterin Google News
Ad
We are open to cooperation with authors in the news and analytical departments. A prerequisite is the ability to quickly analyze the text and check the facts, to write concisely and interestingly on political and economic topics. We offer flexible working hours and regular payments. Please send your responses with examples of work to [email protected]
24 comments
Information
Dear reader, to leave comments on the publication, you must sign in.