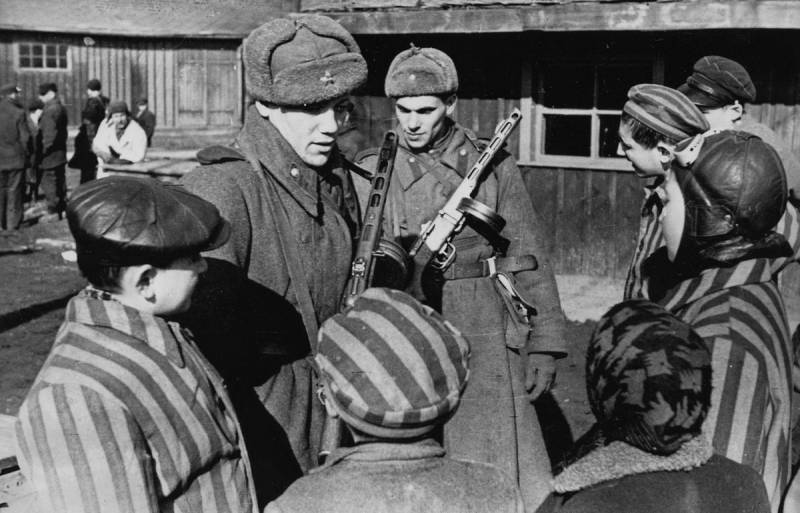 The violent reaction in the domestic media and blogosphere was triggered by a statement by President of Ukraine Volodymyr Zelensky who accused the Soviet Union at the beginning of World War II and “creating favorable conditions for the unleashing of the Holocaust,” as well as subsequent comments of the same kind that came from his predecessor as “leader Ukrainian nation ”Leonid Kravchuk, in truth, cause a fair deal of bewilderment.

Excuse me, did you expect something else? Did you count from these characters on an objective or at least sane assessment of the history common to all post-Soviet countries? Apparently, a cruel joke with some of our compatriots in this case is played by the fact that the theme of militant anti-Sovietism and Russophobia, which has been raging with might and main in the "unbroken" for the seventh consecutive year, has recently faded somewhat in the Russian information space. I got tired, got tired of it, got tired ... Nevertheless, obviously, it is worth contacting her again.

From the extremes in the South ...

If someone, not being too guided in the current situation in Ukraine, continues to think that “the fight against the damned Soviet past” and its tangible symbols is an idefix exclusively for the western regions of this country, or, in addition, crowded with immigrants from those cities, "Then he is mistaken in the most cruel way. "Decommunization" rages there from West to East, from North to South. Her dormant followers watch and act. The dismissal of the director of such an infamous organization as the Ukrainian Institute of National Memory of the odious Vladimir Vyatrovich, who won fame for violent inadequacy not only in his homeland and in Russia, but also in a good half of European countries, did not completely correct the matter. Here, as they say, it’s not a man who paints a place ... The ominous inquisition conclave, having gathered select adherents of “national Svidomo” under its roof, continues its destructive activity, as if nothing had happened, without reducing its activity at all. So, an official letter was received from the Kakhovka city council demanding “immediate dismantling of the“ Tachanka ”and“ Girl in Overcoat ”monuments. These monuments, according to the National-Svidomo ghouls from the institute, serve to glorify "the Red Army’s struggle on the Kakhovsky bridgehead during the Soviet-Ukrainian war ... events related to the activities of the Communist Party ... the persecution of participants in the struggle for the independence of Ukraine in the XX century" . And therefore, "unconditionally subject." Down with them! At the same time, the institute’s leadership adds to its insolent and peremptory demands a reminder that the “protection of totalitarian symbols” in the “uncool” is now fraught with criminal prosecution - up to five years in prison.

What a "Soviet-Ukrainian war" ?! What are the "participants in the struggle for independence" ?! The “defenders of history” do not have the slightest idea about the subject they are trying to defend, even at the level of the comprehensive school curriculum. The fact that in 1920 near Kakhovka the Red Army units fought with the Russian army of Baron Wrangel, these alternatively gifted individuals do not care at all! It is very interesting how the White Guards, Russian generals Ivan Barbovich or Vladimir Vitkovsky would react, whose units then tried to stop the unstoppable attacks of the Red Cavalry, if someone had thought to blurt out that they are dying in the steppes of New Russia “for the independence of Ukraine” ?! For some reason, it seems to me that such a cheek without ceremony would be pulled up on the nearest aspen, saving the cartridges necessary for fighting. Really, sometimes it’s a pity that the time machine is just fantastic. So far, the residents of Kakhovka are very categorical and do not intend to grant anyone the right to pull their paws to the monuments, which long ago became symbols of not only their hometown, but the whole Kherson region. In any case, the local mayor Andrei Dyachenko has already announced that he does not intend to carry out delusional orders “from the center” in any way. Moreover, the mayor threatens to raise the entire local population to the defense of Tachanka - in case the "national patriots" with grinders and sledgehammers come to Kakhovka, as happened in more than one locality in Ukraine. Similar ideas and appeals, by the way, are already being voiced with might and main, so far - on the Internet ... On the other hand, in this case, “sneaking” secretly a bronze colossus of more than 60 tons in weight will not work. There is no serious equipment not enough. So everything really will depend on the determination and courage of the townspeople.

... to the extremes in the North

In the northernmost region of Ukraine - Chernihiv, exactly the same thing happens, as you might guess. For the second year already, Oleg Bondarenko has been wiping the head of Novgorod-Seversky because of the mosaic images of Lenin and Stalin discovered by vigilant "patriots" at the very top of the local water tower. The local police were so ecstatic about this matter that they were not too lazy to initiate a criminal case under article 436-1 of the Criminal Code of Ukraine: “Production, distribution of communist, Nazi symbols and propaganda of communist and national-socialist (Nazi) totalitarian regimes”. All the same, the Institute of National Memory demanded that Bondarenko “immediately remove” the portraits of Soviet leaders back in 2017, but the mayor sent these figures to hell. Firstly, they are not included in the list of objects for “decommunization” approved by the regional council, and secondly, the water tower is not a monument or a monument, but even the most important part of urban infrastructure. And thirdly, there’s a lot of fools to climb to the top and, what’s good, break their neck in the process of “struggle with the totalitarian past”. Moreover, everything was done honestly in those days, not like today - go and destroy it. Meanwhile, local policemen are not going to give up at all - at the end of last year, on their initiative, an authoritative art expert examination was to be held, the purpose of which, apparently, is to decide whether the portraits indicated above are “symbols of totalitarianism” or whether they can be left alone. One gets the impression that the Chernihiv police, where, as throughout Ukraine today, crime lurks all conceivable and unimaginable frames, there is absolutely nothing more to do.

This thesis, by the way, is also confirmed by another story that happened quite recently in the same area. A criminal case under article 436-1, so beloved by local "law enforcement officers", has already been opened against the owners of a restaurant in Pryluk. Referring to the statement of a certain anonymous “citizen with patriotic convictions”, law enforcement officers broke into this institution and with horror discovered in its setting a whole breakthrough of “symbols of the communist regime”! The whole ceiling was decorated with the emblems of the USSR and its union republics, and from somewhere from the corner on the descendants of the undereached Lavrenti Pavlovich policemen jumping around the hall, Joseph Vissarionovich himself looked from the portrait with a bad squint. As you can see, Vyatrovich’s extra feeding was dispensed with here. However, the official version of the events raises more than serious doubts. Apparently, the police representatives who behave today on Ukrainian soil in exactly the same way as their forerunners of the same name from 1941-42 simply demanded that the owners of the institution receive a cash bribe, or at least free feeding. Well, they received an extremely offended refusal. Since the mental abilities of these “cops” to categorize restaurateurs according to traditional “economic” articles of the Criminal Code are categorically not enough, they decided to cling to “propaganda of totalitarianism”. I bet that's exactly how it was. The fact that over the past year only the number of rape of minors has doubled in Ukraine (official statistics of the General Prosecutor's Office of the country), the local “defenders of the Law” absolutely do not care. They are busy with the most important thing - “decommunization” ...

It is quite obvious that the ongoing in Ukraine, since the “Maidan” coup and legislatively enshrined there in 2015, a barbaric war with historical memory and truth, is not a “fight against totalitarianism”, but a triumph of russophobic vandals seizing power, who, having started destroy, can no longer stop. So, at the end of last year in Kharkov (by the way - one of the most Russian-speaking cities "uncovered") a monument to Maxim Gorky was ruthlessly destroyed. In the same year, a memorial plaque dedicated to the writer Ivan Bunin was smashed in Odessa (also by no means Galichina) ... It would be okay to get the handout of “The Petrel of the Revolution” - it really sang the Soviet system and was personally friends with Stalin. But Bunin, for what ?! Well, never a communist leader! Unless - Russian in thought, word and spirit. The swastika, painted all the same in 2019 at the monument to Sholom Aleichem, standing in the very center of Kiev, may well serve as the answer to this question. Shooting down red stars and destroying monuments to the heroes of the Great Patriotic War, the militant Ukrainian "culturists" quite consciously and intentionally open the way for completely different characters, much more sweet and close to them. And with the current head of state, Vladimir Zelensky, this happens with absolutely the same intensity as with his predecessor. Expecting something else from him is the height of naivety and shortsightedness.

Bacchanalia of the desecration of shrines and Russophobia will rage in Ukraine exactly until all the inspirers, participants, and, most importantly, the ideologists of the coup d'etat and the fratricidal war that followed. Until that time, Russia could only react as harshly as possible to the blasphemy created by Ukraine and to the “historical” trickery of its leaders.
Ctrl Enter
Noticed oshЫbku Highlight text and press. Ctrl + Enter
We are
How Ukraine break Putin's plan: six tips Zelensky
Ten "defeats" of Putin
Reporterin Yandex News
Read Reporterin Google News
12 comments
Information
Dear reader, to leave comments on the publication, you must sign in.