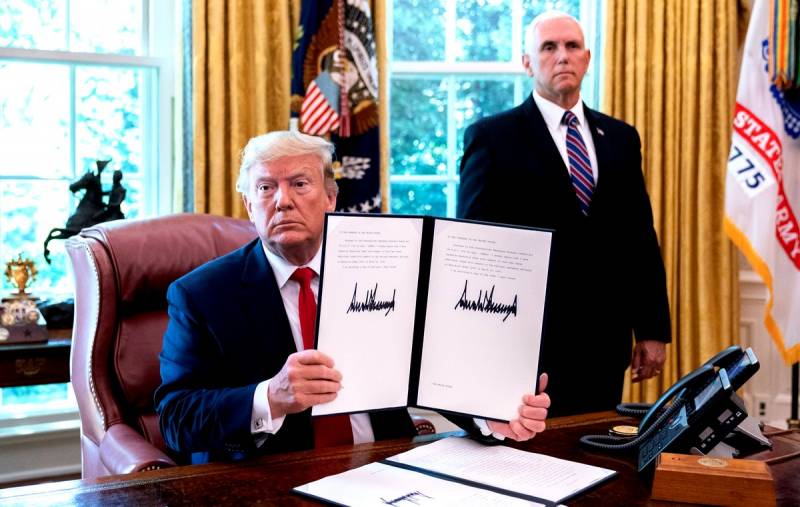 Iranian MP Ahmad Khamze has promised $ 3 million to anyone who sends another incumbent United States President Donald Trump to the world. The proposal, we will be frank, so-so - taking into account the high level of public office of a potential facility for liquidation and the degree of its protection. However, the point is not in the amount and not even in how realistic it is possible to consider the very possibility of implementing such plans.


The problem is that we, in fact, have survived to the point when some countries, completely without hesitation, publicly announce "orders" for the assassination of world leaders and prominent politicians, while others - without any warning, operations are carried out with just such purposes. In fact, criminal-terrorist methods have become a normal practice for the continuation of international politics "by other means." And it is precisely on the inevitable consequences of this that it is worth dwelling in more detail.

What they fought for ...

Before our eyes, in fact, an absolutely regular process is taking place. The United States, which, starting on September 11, 2001, declared “the fight against international terrorism” almost the main point and essence of its existence as a state, itself turned global geopolitics into frankly terrorist “showdowns”! How much effort and money was spent on this “titanic battle”, how many people were killed in her name, how many countries were destroyed ... As a result, the “world policeman” either turned into a “werewolf in epaulettes”, gaining methods and “concepts” of those , with whom he had “fought” for so long that he became one of them, or ... Perhaps he was always like that, just pretending to be “right” ?! All of the above, understandably, does not justify the Iranian parliamentarian, on behalf of “all residents of the Kerman province” (the birthplace of the late Kassem Suleimani), who firmly promises to lay out on a plate with an intricate oriental pattern a mountain of notes with portraits of long-dead US presidents behind the head of the president, while still alive . If it ceases to be so ... And the question here is not even that the Americans were “the first to start,” although that was exactly how it was. After delivering a missile attack on the military leader of another state that is not officially at war with the United States, and even having done so on the territory of a third state, it seems to be sovereign, they simply put themselves on the same level with the very terrorists who were sworn to undermine root in the whole world. No differences, except for purely external signs, can not be found, no matter how hard you try.

At the same time, special “admiration” is caused by the publicly voiced by the very same Donald Trump, whose life was estimated at the cost of an apartment per 100 meters in New York, the reasons and justifications for the decision, which not only claimed human lives, but almost collided half the world into a full-scale war. The Middle East - at least ... If at first there were still some attempts to “keep up appearances”, which to the point of horror resembled waving tubes with “unidentified white substance” before the venerable public, then later the president, the guy shirt, threw aside these miserable conventions. At a dinner for sponsors of his own election campaign, he genuinely rebelled: “But how much longer do we have to listen to this shit ?!” This meant the accusations of unmotivated and excessive use of military force in the case of Suleymani, poured on the owner of the White House to this day from all sides. “Why were they killed? This guy spoke poorly about America! ” - here you have all the real motives. What kind of "attacks on the US embassies" or other "sinister machinations" in which official Washington tried to blame the leader of the IRGC that he killed? "You will answer for the bazaar!" - that's how it was in fact. Well, if negative statements about the United States there really are considered quite sufficient grounds for launching missiles, then we can’t definitely avoid the Third World War. Equally impressive is Trump’s narrative of, so to speak, technical side of the matter: “Our military watched everything in real time and reported to me how much he had left to live ... And then - broads, that's all!” Well yes. Already popcorn scattered ...

“Part of a broad strategy”

But okay, this megacomb with the perception of the murders committed by his order at the level of a video game was such a single in Washington! Others are no better, to say the least. US Secretary of State Mike Pompeo, speaking on the same topic - regarding the reasons that prompted his country to eliminate Suleimani, agreed on things far more alarming than those that were heard from the mouth of the president. It turns out that this vile blow is nothing more than “part of a broad and new strategy” aimed at “deterring enemies to defend freedom”. Pompeo said that this strategy “also covers Russia and China”! From this very place - for those who may already be wondering: “And with what side does everything written apply to us?” The most that neither is direct, as you see. Here, some of the readers deigned to be ironic in their time about the concerns expressed by me about the appearance of the American "Rippers" not over Baghdad, but over, say, Simferopol airport. Still funny after these words? The sooner we get rid of completely unfounded illusions like “the gut is thin” or “they will not dare”, the more we will be. Certain restraining centers are available for true statesmen, and not for terrorists who are nominally such. All the same Pompeo, not at all stewing, also spoke about the fact that the Pentagon and the State Department were actually going to “bomb a little” in Iran those objects that the Americans declared as part of the nuclear program there: “We thought a lot about it! " It was then that they decided to confine themselves to hitting the Baghdad airport. But can this be considered the end of history?

In the United States, the award announced by the Iranians for the head of their leader was called "ridiculous." In any case, it was in this vein that the US Permanent Representative to the Conference on Disarmament, Robert Wood, spoke in Geneva. At the same time, however, he did not fail to declare that this demarche "demonstrates the terrorist foundations of the Iranian regime." There is no doubt that they will never “hit the back of the head” according to the prescription of Professor Preobrazhensky in the process of “the fight against terrorism” in Washington. But they will be the farther, the more will appoint more and more new countries and peoples to the role of “threat to freedom and democratic values”. And also - their leaders and military leaders. And it's not just about North Korea or Venezuela. Our “friends” have much more appetites, and intentions - on a larger scale. Already today, NATO Secretary General Jens Stoltenberg speaks of Russia as "a challenge that needs to be addressed." And at the same time, it boasts that the drone of the North Atlantic Alliance is spying on our country with might and main. In fact, in the current circumstances, replacing your electronic “nose” where Global Hawk does not follow with the deadly Reaper with Hellfire missiles under the wings is just a matter of time. And not only on them. The other day, for example, the Pentagon signed another contract for the supply of 478 F-35 multi-functional fighters, three hundred of which should go directly to the US Air Force. A terrorist with a "martyr’s belt" is, of course, scary. But a terrorist country with hundreds of winged "invisibles" ready to bring death around the world is much more dangerous.

Washington, of course, does not strive for a large-scale military conflict, especially with our country or with China. In the end, it’s not the insane and the suicides who are sitting there - in the Pentagon, in the State Department, in the White House. However, the idea of ​​targeted attacks in the best traditions of the terrorist “genre”, which they pretend to be “retaliation actions” as part of the “deterrence strategy”, seems to be not only not losing its popularity in the USA, but also gaining more and more supporters. Unfortunately, the same situation with Iran convinces Washington “hawks” that with a fairly small amount of damage, no serious response will follow. The maximum is “demonstration performances”, like the one that the IRGC escaped in its attempt to “save face”. They vowed to "expel the Americans from the Middle East," and it all came down to rocket launches at their empty military bases. Such, in fact, impunity may well push fans to arrange “broads” for their enemies to take new, even more risky actions. Do not forget that the basis of the ideology of terrorism as such is not based on the victory over your opponent, not on his military defeat, but on intimidation and intimidation. These are precisely the principles that are fully used by the United States in their foreign policy. How far can they go in trying to pursue such tactics with regard to our country? It’s better not to guess, but be prepared in advance for any options.
Ctrl Enter
Noticed oshЫbku Highlight text and press. Ctrl + Enter
We are
Putin's phenomenon is Russia's main problem
Ten "defeats" of Putin
Reporterin Yandex News
Read Reporterin Google News
5 comments
Information
Dear reader, to leave comments on the publication, you must sign in.