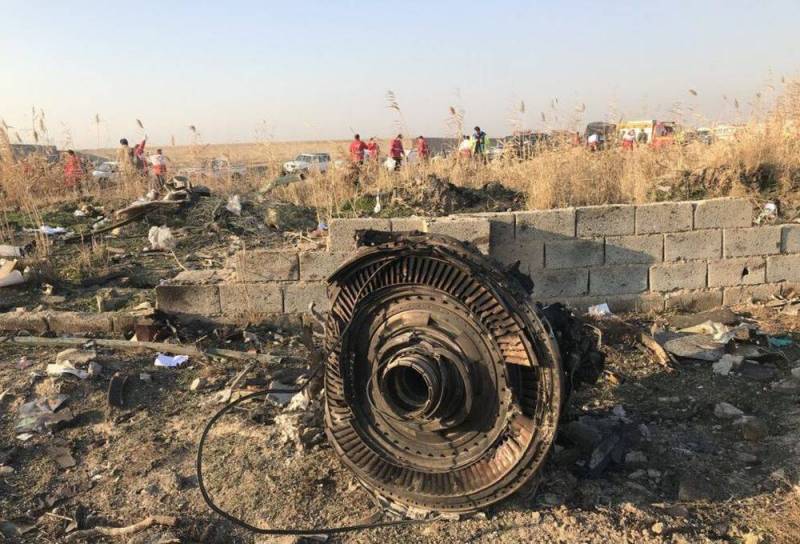 More recently, against the background of the assassination of Iranian General Suleymani and the subsequent retaliatory missile strikes, a tragic incident occurred - the destruction of a passenger plane Boeing 737-800 of the Ukrainian airline UIA, which was followed by a chain of rapidly changing events.

08.01.2020/737/800, early in the morning, there was a disaster for the passenger Boeing 11.01.2020-14.01.2020 of the Ukrainian airline UIA. Soon thereafter, on January 15.01.2020, XNUMX, Iran recognized that it had unintentionally shot down a passenger airliner. Three days later, on January XNUMX, XNUMX, the head of UIA, Yevgeny Dykhne, accused Iran of Iranian authorities not closing the airspace over the country during military operations. And immediately after that, on January XNUMX, XNUMX, Iranian President Hassan Rouhani apologized for the fact that the republic’s armed forces accidentally shot down a Ukrainian plane.

I look at these events and at these people, and I do not understand the following.

Iran set an absolute record (I apologize for this word in connection with such a tragic event) in terms of speed of guilty pleas for a downed plane. If I'm wrong - correct, but I do not know of another such example. And there are enough of them.

The Italian DC-9, which crashed into the Tyrrhenian Sea in 1980, allegedly shot down by NATO F-4 fighters chasing the Libyan MiG, was not recognized as the alleged culprits. Only after three investigations, in 2013, the decision of the Italian court paid the families of the victims.

Iranian Airbus A300, shot down on July 3, 1988 by an anti-aircraft missile launched by the American cruiser Vincennes. The cruiser air defense took him for the F-14 fighter of the Iranian Air Force. Killed 290 people. President Reagan considered the actions of the captain of the cruiser justified defense. Compensations to the families of the victims and for the plane were agreed only in 1996 with the direct participation of the International Court of Justice. The commander of the American cruiser soon after received the Order of the Legion of Honor for his successful service in 1987-1989.

The Russian Tu-154 flight Tel Aviv-Novosibirsk on October 4, 2001 was shot down by the Ukrainian S-200 air defense system. Only two years later, Ukraine signed intergovernmental agreements with Russia and Israel on compensation for the relatives of those killed in a plane crash, without legal admission of guilt. When Siberia Airlines turned to Ukraine with a lawsuit of $ 15 million for the dead plane, the Ukrainian side conducted an additional (unrecognized) investigation and concluded that it had not shot down the plane, and, accordingly, had not paid the money.

The Boeing 777, which was flying MH17 on July 17, 2014, crashed over the Donbass, where it had been fighting for 2 months. The airspace above the war zone was not closed, and the Ukrainian government still does not even think that it is responsible for what happened. For a minute, five and a half years have passed ...

Against this background, Iranian President Rouhani apologizes for the delay in Iran's recognition of its guilt. For a three days. I have great respect for this decision.

But ... does it seem to me alone that this is too much?

If you want to know my opinion, the one who did not close the space over the country is to blame. I don’t really care if a person pressed a button or if the system activated itself.
According to him, in a situation of escalation of tension between Tehran and Washington, the Iranian authorities had to take care of the security not only of the Ukrainian side, but also of their entire airspace.

Or close it if they are not ready to bear responsibility for security, as provided for by international requirements. And they violated their international agreements. Did not fulfill the main function - did not provide security
- added the president of UIA.

That is, the fact that Ukraine did not close airspace after 2 months of hostilities, drove a passenger plane into the sky over the Donbass is an everyday matter, but Iran’s actions after several missile attacks are a terrible and unforgivable crime.

This is also a kind of record. A record of inadequacy and hypocrisy.

And both records are worthy of the Guinness Book.
Ctrl Enter
Noticed oshЫbku Highlight text and press. Ctrl + Enter
We are
Ukraine from the inside: traitors, curators and those who watch from the Kremlin
Ten "defeats" of Putin
Reporterin Yandex News
Read Reporterin Google News
21 comment
Information
Dear reader, to leave comments on the publication, you must sign in.