"Complete curtailment of forces": why the US is ready to "surrender" Africa to Russia and China 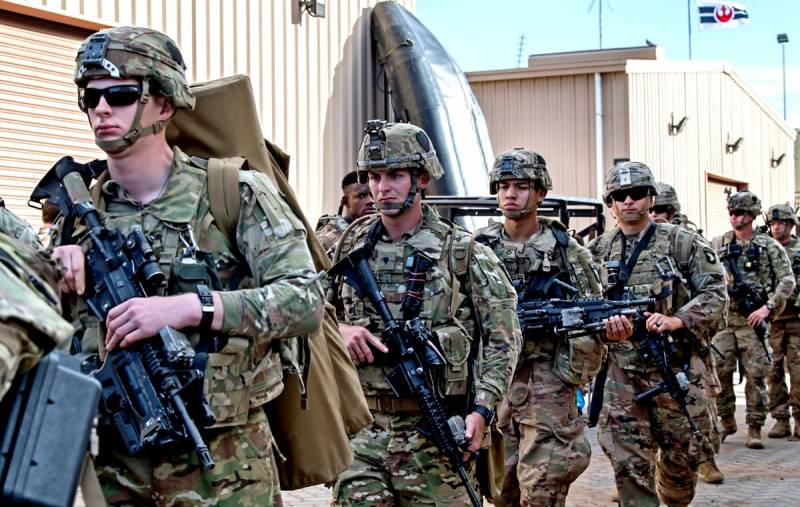 In the American media, citing "informed government sources", information was received that in the very near future the Pentagon would seriously consider the question of the maximum reduction of the US military presence in Africa, up to its complete curtailment. How so? Indeed, until recently, Washington loudly expressed "deep concern" that Russia and China are strengthening their positions on the Black Continent? I remember that something was even about confronting them, almost about "squeezing out" of their main geopolitical opponents from this region ...


Upon closer examination of the plans of the defense department, we can conclude that everything is far from simple in this matter. This, of course, is not about fleeing, but rather, about regrouping forces within the framework of a certain ingenious strategy directed, again, against those countries in which the United States sees a real threat to its own global hegemony.

What they fought for ...

As was calculated by the Americans themselves, outside the United States there are now approximately 200 of their troops, who, for the most part, are carrying out the "fight against terrorism." And a lot of typing ?! This "great war", declared by Washington in 2001, after the tragic events of September 11, for almost two decades has devoured enormous funds from the state budget and a lot of human lives. I emphasize - the lives of the American military, because the deaths of people in those countries that they appeared to "save from terrorism" are not particularly taken into account. For example, this year the Pentagon admitted without the slightest embarrassment that in 2018 its “liberators” somehow accidentally killed 120 civilians only in Afghanistan, Iraq, Somalia and Syria. In 2017, by the way, the same officially confirmed figure was 20 times larger! And this despite the fact that, according to the estimates of international expert instances, the Americans consider the victims of the “lawlessness” that they create to be very peculiar and recognize only those that are completely impossible to hide ... However, we were somewhat distracted - the main thing is that Despite all the money spent, other resources, despite the spilled blood, the US Army, chasing the “enemies of democratic values” around the globe, has not achieved any significant success. In Afghanistan and Iraq, it smells neither of peace, nor of civil consent. Explosions thunder there almost every day and people continue to perish at the hands of those whom the "most powerful army in the world" has threatened to crush to powder "one left."

The only serious victory over terrorism in the person of the “Islamic State” was won in Syria and certainly not by the Americans. Donald Trump can tell any tales about this, but the world knows the truth. Yes, in general, the head of the White House himself admitted that in Syria he was only interested in oil, with which he intended to "do what he wanted." That’s why he left exactly so many warriors there that were enough to guard the illegally seized wells. The situation is similar with other countries where the United States has long and hard tried to "put things in order" - Afghanistan, Iraq and others. Trump, I remember, swore that he would “pull the country out of the era of endless wars,” and at the level of his administration, there is more and more talk that “brave American guys” should be returned home from wherever they “fight” unclearly with whom and it’s not clear for what. True, such ideas do not provoke much enthusiasm among the “hawks” firmly entrenched in the higher echelons of the Washington politicum. For the mere withdrawal of troops from Syria, the president did not spit upon and did not accuse of the “betrayal of national interests” except the most lazy. Yes, and the Pentagon has such prospects, fraught with cuts in budgetary allocations, which, no matter what they say, they know how to “cut” simply awkwardly, do not smile. And now there’s a new trend: leaving Africa, where the US defense department recently rebuffed the most luxurious base for its UAVs in Niger, which “flew” into more than 100 million dollars. It was intended, first of all, to assist the French troops fighting the militants in several neighboring countries, but now, apparently, they can not see support from the air. Why's that?

It is completely incomprehensible how these intentions fit into that extremely nervous reaction to the very real increase in Russia's political and military presence on the Black Continent, which Washington invariably demonstrates? This year, I remember, the head of the African Command of the US Armed Forces (AFRICOM) Thomas Waldhauser on the rostrum of the Senate almost tore his tunic on himself, flailing about the "prospect of the spread of Russian military influence throughout Africa." Moscow supposedly supplies weapons there in echelons, and trains local armies, but at the same time “supports local dictators with the help of private military companies”. In general, everything is as always - he said ten percent of the truth and lied with three boxes, thickening the paint to full, sorry for the pun, blackness. What kind of "Russian PMCs" are they trying on Waldhauser and his colleagues on African soil is a question, rather, to a psychiatrist. In general, our country does not really need tricks in this region, since the countries there in the most literal sense of the word are lined up in a long queue both for our weapons and for our “specialists” instructors. At the same time, they conclude quite formal agreements with Russia on both arms and military supplies. equipment, and for other types of assistance. Starting in 2015, deliveries of our weapons to the Black Continent began to grow at an unprecedented pace, their volumes doubled, no matter the year! However, why confine yourself to this aspect of cooperation? Today we are talking about much larger-scale projects, including quite realistic prospects for the deployment of Russian military bases in Africa.

For skeptics, a considerable number of whom, as usual, invariably accepts to question the advisability of increasing our presence in a particular region (especially if this is associated with large-scale financial investments), I will give several eloquent examples. Starting January 1 of the next year, a new currency, eco, is introduced in eight countries of the Black Continent - Cote Divoire, Benin, Burkina Faso, Guinea Bissau, Mali, Niger, Senegal and Togo. At the same time, the so-called West African franc (CFA franc), which, as the name implies, was most tightly tied to Paris, ceases circulation. In exchange for the “support” of the monetary unit, all the states mentioned above were required to keep at least half of their own gold reserves in the French treasury. Now this has come to an end. Africa more and more boldly and decisively “sets sail”, refusing the “help” of those who until recently trampled its land as colonialists. Why am I? And besides, with at least half of the countries mentioned above, Russia already has agreements on full-scale military cooperation, which concerns not only arms supplies. In Mali, by the way, the French at one time launched the “anti-terrorist operation” solely in order to survive from there the Chinese. With us in the current scenario, such a trick, of course, will not work. The most remarkable thing is that, speaking of "increasing Russian and Chinese expansion in Africa", the United States invariably emphasizes that it is carried out exclusively with "base", "mercantile" and almost predatory goals. While the Americans, of course, climbed and climb the Black Continent exclusively with the most noble intentions, bringing "peace and democracy." Yes Yes...

Just a regrouping of forces?

Pentagon guys can poison anyone, but not those who remember that after the threats from Beijing they completely deprive the United States, and, in particular, its military-industrial complex, supplies of rare-earth metals, look for these extremely important components for any products of modern technology Americans gathered just in Africa. In general, it has long been estimated that having lost the ability to dispose of whatever the region’s richest natural resources (including diamonds, cobalt, uranium, gold and much more) include in the West, it will be cut off from a third of the world's fossil resources. But some of them do not have other explored deposits, except for African ones! All these riches the same Americans will have to at least buy at fair prices. It is no wonder that reports, such as that Zimbabwe intends to conclude an agreement with Russia on fuel supplies for one and a half billion dollars, under which our country will receive payment for energy not dollars, but diamonds from the state-owned Zimbabwe Consolidated Diamond Company, cause the United States to indignation. No less, however, it spoils Washington’s mood and information about the African successes of the Chinese comrades, who use a slightly different tactic when “developing” the continent. Not so long ago, information surfaced according to which the Administration of Kenya Ports (KPA) is about to pass under the control of the Celestial Empire, and, most importantly, the key port of this country of Mombasa. The reason is simple - a loan from China of $ 5 billion, which the country received for the construction of the Mombasa-Nairobi Railway (SGR). The rails were laid long ago, the trains were empty, and there was nothing to pay ... It seems that the issue will be resolved in the same way as in Sri Lanka or Zambia at one time: transferring ownership of the most important transportation hub in East Africa to the Chinese.

Naturally, they cannot reconcile themselves to such a situation in the USA. At one time, the Pentagon was talking about the adoption of a "special plan" to counter the influence of Russia and China in Africa, designed for at least five years. Really soberly looking at things, they decided to abandon such intentions there. Probably not. The point here is completely different. The current head of the US Department of Defense, Mark Esper, has repeatedly voiced his opinion: the US Army should stop “counterterrorism operations,” which are as costly as, admittedly, useless. But it is necessary to do this solely in order to focus the freed forces and means on "confronting the main enemies of America." That is, of course, Russia and China. So it's too early to rejoice. Perhaps the United States will get out of Africa, reduce its contingents in Afghanistan and even in some places in Latin America. The question is different - where do they subsequently intend to strike at Russia and where - at China? There can be no talk of any peace and diminishing Washington’s imperial ambitions. US military spending is not decreasing; on the contrary, it is growing by leaps and bounds with a monstrous overall budget deficit. The Pentagon stubbornly climbs into space, announces the construction of new aircraft carriers and submarines. And also - at the fastest pace it is stepping up its activity on the borders of Russia. At the same time, the cultivation and training of small, but extremely toothy and poisonous “mosque” that the United States intends to set on our country again does not stop. So, the Estonian Ministry of Defense recently boasted that Washington intends to allocate 175 million dollars "for the needs of the armies of the Baltic countries." Military assistance to Ukraine, according to the relevant budget for 2020 signed by Donald Trump, will amount to $ 300 million ...

The fact that the Americans want to leave Africa, thereby opening up greater freedom of action there for our country, is, of course, wonderful. But it would be better if they just left us alone. First of all, moving away from the Russian borders.
Ctrl Enter
Noticed oshЫbku Highlight text and press. Ctrl + Enter
We are
Ukraine from the inside: traitors, curators and those who watch from the Kremlin
Ten "defeats" of Putin
Reporterin Yandex News
Read Reporterin Google News
6 comments
Information
Dear reader, to leave comments on the publication, you must sign in.