The strongest pressure in 100 years: why did the US start a “war” against the Vatican 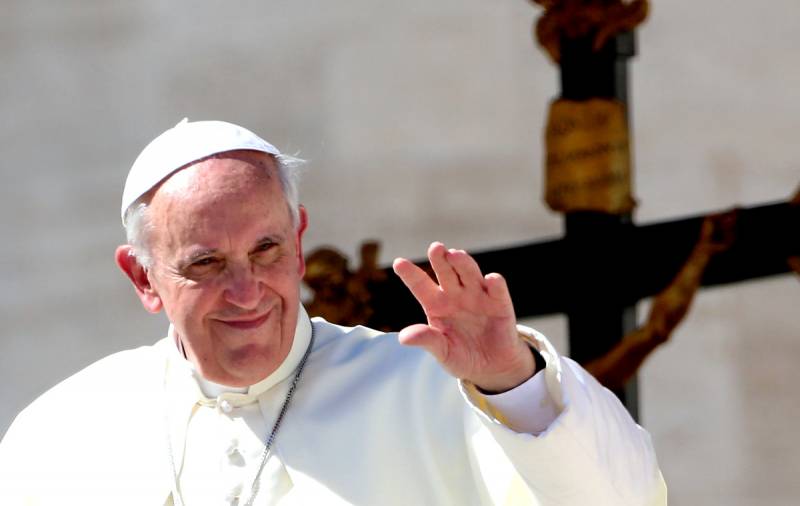 The progressive world community has won yet another victory over terry clericalism and dark obscurantism ... So, it seems, it’s supposed to respond to news like the report that Pope Francis, seized to the limit with accusations of "harboring shameful scandals," overturned the decision of his predecessor on the throne of the Catholic Church, Benedict XVI in 2001, to introduce the so-called "papal secret" for cases involving harassment of priests, especially to minors?


It would seem that a good deed has happened, which is certainly worth greeting and approving. However, before rushing into unambiguous assessments of the situation, it should be understood that it is only part of the “big game” waged by Washington against the Vatican and its pontiff personally. And not at all with good and selfless intentions.

Fighting debauchery or the church?

Apparently, the last straw that "finished off" the head of the RCC was the class action lawsuit against the Vatican filed in the federal court of New York County, where an unprecedented law was passed at the end of this summer that allows to demand the prosecution of harassed clergymen , even if it took place dozens of years ago. At the same time, however, a problem arose: the Vatican is after all a sovereign state and, therefore, the jurisdiction of the United States is not subordinate. Well, a solution was found quite quickly: the lawsuit was filed against virtually the entire Catholic Church and its leadership, and not against some of its promiscuous figures. So dad could not stand it ... At the same time, the notorious "papal secret", which the Vatican was so blamed for, did not at all prohibit the investigation of crimes of a sexual nature, suspected of which were raised by Catholic priests, but of the restrictions imposed on the dissemination of information about it. From now on, the “obligation to remain silent” will no longer restrain those victims and witnesses who express a desire to share a not-too-decent story (or its own interpretation) with the same press. A feast of the spirit is planned ... At the same time, the accusations of "pedophilia", "child molestation" and the like things that fell like a cornucopia on the Catholic clergy all over the world do not always find confirmation.

The clearest example of this is the case of Cardinal George Pell, 77, from Australia, who was sentenced to 6 years for allegedly “harassing” allegedly committed in 1996. Despite his considerable age, the priest remains adamant. He claims that all the charges against him are fiction, and over and over again he appeals to the higher courts. By the way, the Holy See, which has not yet completed its own investigation into this matter, has not removed Pell from the dignity, limiting himself to a temporary ban on holding services. Someone, and not only in the Vatican, undertakes to assert that the cardinal was brought to the dock not by passion for boys, but by an attempt to restore order in the extremely complicated financial affairs of the Holy See, made after Pell was appointed by the newly elected Pope Francis to the post of Prefect of the Secretariat for affairs economics. Then he, who took up the matter with all seriousness, began to "clear up the rubble" in the Vatican bank and created the Financial Information Service (AIF) to stop financial abuse, even earned the nickname "Cardinal Rambo". Moreover, it was Pella who was called by many as the most likely candidate for the papal tiara in case of the next election in the foreseeable future. And now this piece is swept away from the board in one fell swoop. Even if the cardinal manages to defend his own freedom, his good name is already buried forever and he will never be a pope forever.

It should be noted that the main stream of accusations against the RCC and its Holy See itself, one way or another, directly or indirectly, comes from the United States. Francis is clearly not the pontiff who the Washington "arbiters of world destinies" would like to see in the Vatican. From them, the Pope addressed more than once open calls "less to climb into policies”, Which became a response to the statements of the head of the RCC on the need to soften the attitude towards migrants and his calls to take seriously the issues of climate change in the world, directly contrary to US government policy. However, there are much more obvious "stumbling blocks" between the Vatican and Washington. One such painful moment is Francis’s stubborn reluctance to acknowledge the creation, actually by the hands of the United States and with their support of the schismatic “autocephalous church of Ukraine” named after the Tomosiferous Poroshenko. The Pope does not want to enter into an inevitable conflict in this case with the Russian Orthodox Church and its patriarch Cyril, the relationship with which he, he said, would like to see "fraternal". The pontiff does not want to quarrel with Vladimir Putin, because of his visit to the Vatican, the primate of the Greek Catholic Church of Ukraine had to wait an extra day for the head of the Holy See, which looked especially ambiguous and humiliating. Francis remains deaf to the persistent hints that sound from Washington that he needs to change the “wrong” course and position regarding the destructive processes that are taking place in Orthodoxy now.

However, even more annoying for those in power in the United States is the position of the Pope regarding China. While Washington has been trying for a year and a half in a row by all imaginable and inconceivable ways to ruin the life of the Celestial Empire, using, among other things, accusations of “religious oppression,” Francis confesses his love for this country! And moreover, it does the unthinkable - it concludes with its representatives in 2018 an agreement on the joint appointment of the bishops of the RCC in China! All this, of course, causes an immediate hysteria in Hong Kong, whose cardinal Joseph Chen Rijun begins to talk about the "betrayal of Chinese Catholics" by the pontiff. Washington, on the other hand, is such a "self-activity" that leads to indescribable rage. Yes, like that - we here, you understand, sparing no energy, we are looking for more and more reasons to “punish” China, now we have reached the “oppressed Uigurs”, and the Vatican allows itself to negotiate with Beijing and build normal working relations with it! It is not for nothing that the US ambassador to the Vatican, Callista Gingrich, criticized these actions of the papal throne quite clearly, making it clear that her masters wish that Francis in his work would exclusively look at John Paul II, who, in close cooperation with the White House and the US State Department, “resolutely fought against the destructive effects of Soviet communism. ” In a word, the USA, not at all embarrassed, indicates to the Holy See those “acceptable frameworks” in which they see its activity, and neither pope nor his cardinals categorically recommend to go beyond.

The strongest pressure in a hundred years

The struggle of those forces that visibly and invisibly govern the life of the United States and seek to rule the whole world is not just a desire to subordinate to their will specific church leaders who have a considerable political weight. This is a struggle for the minds and hearts, for the souls of about one and a half billion RCC believers, which, for example, has exceptionally strong positions in Latin America, where today Washington is again trying to restore order by the usual dirty and bloody methods. The proof of this statement are many facts. For example, the scandal with the leak of secret data from the Vatican, by analogy with the activities of the Wikileaks known to everyone, called the “Vatiliks”, broke out in 2012, under Pope Benedict XVI, to a large extent contributed to his re-election. One thing can be said about what happened: the highest class of intelligence work, hardly accessible to the leaders of the Vatican itself, even taking into account their experience of intrigues dating back centuries. The opus of Frederic Martel, “Secrets of the Vatican: power, homosexuality, hypocrisy,” in which at least 80% of the inhabitants of this religious state are declared perverts, was released in February this year. Moreover, the little book was published immediately in 20 countries of the world, in 8 languages, which unequivocally testifies to the "huge" money thrown into the project. But it was written, according to the author, for at least 4 years. Therefore, the order arrived in advance. Where from? The conclusion is simple. Archbishop Carlo Maria Vigano began to rape the papal throne with accusations of "concealing the facts of pedophilia" after spending 5 years in Washington as the nuncio (ambassador) of the Vatican to the United States. "Reforged" is obvious.

And it was in the United States in 2018 that an extremely odious non-governmental organization, Better Church Governance, was created. It seems that, judging by the name, the fighters for the "best church". That's just why for some reason many people who are "in the subject" people call it only a "CIA branch", working, however, in a close "bond" with other American intelligence agencies. The functionaries of this NGO are not engaged in improving church life directly in the United States, but in the intensified collection of incriminating evidence and confidential information about the highest clergy of the Vatican. All this is not surprising - because in that “wonderful new world”, where those who really stand behind the tinsel and pompous facade of “American democracy”, no “traditional religions” (as Orthodoxy, Catholicism, Islam, Buddhism are called) try to drag us so there can be no place. To a community of beings without a clan and a homeland, a nationality and a race, and even without a gender, such things as Faith are absolutely contraindicated. The maximum is its simulacra and surrogates in the form, for example, of some kind of ecumenical “world religion”, the idea of ​​creating which the globalists are so eagerly pushing into life today. And ideally - the complete absence of any spirituality that interferes with sculpting from the created “in the image and likeness” of Man a brainless and soulless Absolute consumer. Any church that stands in the way of this path should be weakened as much as possible, and in the long run destroyed. So the words of the church historian from Italy Andrea Riccardi that over the past century have never felt such a huge opposition to the Pope, as today, are no exaggeration at all.

Speaking in September this year during the "on the sidelines" of the UN General Assembly event dedicated to "protecting religious freedom," the current head of the White House, Donald Trump, said that 80% of the world's population live in countries "deprived of religious freedom" today! Everything except the Americans is obvious ... And then he promised to additionally allocate at least $ 25 million to fight such a "disgrace". If the United States begins the “struggle for faith,” all of us can only hope for God's mercy ...
Ctrl Enter
Noticed oshЫbku Highlight text and press. Ctrl + Enter
We are
Ukraine from the inside: traitors, curators and those who watch from the Kremlin
Ten "defeats" of Putin
Reporterin Yandex News
Read Reporterin Google News
4 comments
Information
Dear reader, to leave comments on the publication, you must sign in.