In the war with Russia, the United States intends to do with "little blood" 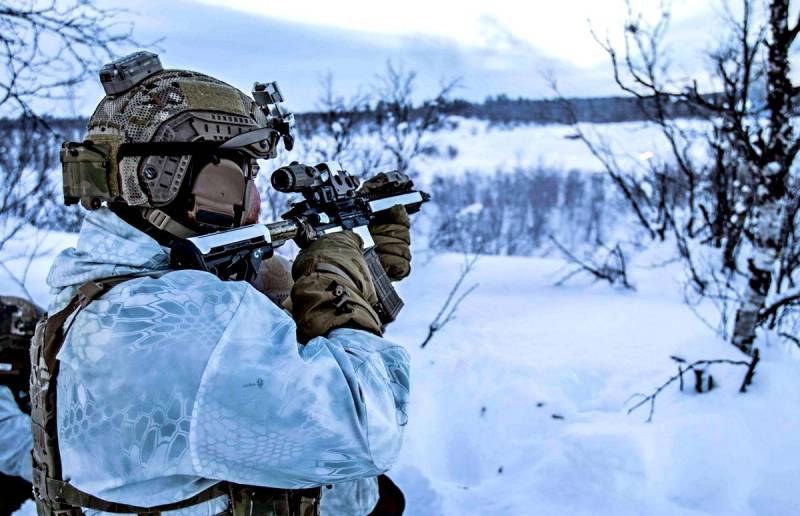 An alarming statement by the head of the General Staff of the Armed Forces of Russia, Valery Gerasimov, about preparing the NATO military bloc for a large-scale armed conflict, in which our country appears to be the most likely enemy, some in the foreign media have already hurried to call exaggeration and "thickening of colors." Unfortunately, this is hardly the case. All the actions of the member countries of the North Atlantic Alliance, and, above all, its “governing and guiding" - the United States, just show that the head of our General Staff does not exaggerate anything, but simply states absolutely obvious facts.


Contrary to his own peace-loving statements, and along with common sense, the “collective West” has more than ever in recent decades come close to the line of using military force against Russia. However, how exactly do the local strategists and tactics see this scenario?

The only truly positive moment against a rather gloomy general background is that Washington is quite clearly aware: in the event of a global collision using all available arsenals, including the potential of the “nuclear triad” of world powers, the chances are not only of winning a landslide victory, but just to survive, the US has no. No matter how much in the West they mock about Putin’s cartoonish rockets, the names Avangard, Dagger, Zircon have long been on the pages of the local media. And today, these names of the latest types of Russian weapons are not mentioned in a humorous way ... And the frank confessions of senior officials from the Pentagon, including its head Mark Esper, that the US military at the moment have not only nothing comparable with the Russian hypersonic weapons, but also effective means that can withstand it, indicate that the real balance of power there is soberly evaluated. Naturally, there are attempts to "keep the mark" similar to the statement of the head of the US Air Force Logistics Command, General Arnold Bunch, who assured reporters that the "American hypersound" will be ready for battle in some couple of years. The bold assumptions of his colleague, General John Rafferty, regarding the fact that the "Precision Strike Missile, PrSM" being tested by Lockheed Martin Corporation "will probably be able to overcome the Russian missile defense system" can also be attributed to the same genre. It can ... It can not ... It would be better if you did not try!

Moreover, the idea of ​​not only a large-scale nuclear confrontation, but even a full-fledged preparation for it does not at all inspire Washington politicians... For all that terry Russophobia that has recently taken root in the main legislative body of power there, there are those among its members who are very actively opposed to such a prospect. So, more recently, three senators - Chris Wang, Todd Young and Robert Menendez (certainly not a friend of our country!), Turned to the Acting Director of US National Intelligence Joseph Maguire with an extremely delicate assignment. Lawmakers are asking him to "assess the consequences of the reaction from Russia and China" to the United States' withdrawal from the latest international treaty limiting the development of strategic offensive weapons (START-3), which is inexorably coming to an end. In their opinion, this “both in the short and long term” will not bring anything good to the United States. Russia's nuclear arsenal, which already poses a mortal threat to any of its adversaries, "will not be limited by anything," a new arms race will begin, in which the Americans today have to play the role of catch-up. Who will she ruin? It is far from the fact that the Russians. On this occasion, by the way, another parliamentarian spoke very frankly - the chairman of the Subcommittee on Europe, Eurasia, Energy and Environment of the US House of Representatives, Democrat William Keating. Also reaffirming his commitment to the extension of START-3 and repeating the duty: "Russia cannot continue to invest so much money in weapons if there are problems that need to be resolved within the country," he found the strength to honestly admit: "By the way, this is absolutely true for us also..."

Moreover, the capabilities of our Armed Forces, which have changed in a completely cardinal way, can be said to destroy the doctrines of warfare customary for the United States - from local to world. It so happened that, thanks to their own geographical position, the Americans have always relied on one thing: “We will retire!” I must say that this approach worked not only for decades, but for centuries. The planet survived two world wars, killing hundreds of millions and destroying entire countries, and not a single bomb fell on US territory. Yes, this alignment eventually forced the Pentagon to aggressively uphold "American vital interests" to maintain a huge network of military bases around the world, but it was still strategically more profitable than exposing its own country under attack. But now all this is more, excuse me, it won’t work ... A very significant one in this respect is the recent publication in the American publication Foreign Policy, the author of which, political analyst Michael Beckley draws conclusions very disappointing for the Pentagon. The main one is that, accustomed to absolute security both “on its own land” and in places of deployment on the territory of NATO allies, the US army is completely unprepared for a war in which “secluded places” will not exist in principle. Modern military Technology allow extremely efficient and, incidentally, not so expensive to “get” the enemy anywhere: even across the ocean, even from the opposite hemisphere of the Earth. You can forget about the "security zones", of which American warriors are accustomed to deliver their strikes with impunity to the world, "bringing peace to the world" - airfields, navy parking lots, transport "corridors", warehouses and bases ...

The most interesting thing is that the resume from all this, a respected author (seemingly a peaceful university assistant professor, by the way!) Does quite unexpected. In connection with the changes that have taken place, should the US moderate its “civilizational” ardor and somewhat reduce its claim to the role of “world gendarme”? Nothing like that! It turns out that for the effective conduct of hostilities, the Pentagon needs to transfer its maximum strength to the territory as close as possible to the borders of a potential enemy! In the case of a hypothetical conflict with Russia - to Eastern and Southeast Europe, if there is an outbreak of trouble with China - to Southeast Asia. Cram there more missile systems and UAVs armed to the teeth - here they are, used “as minefields” and will shorten the enemies! At the same time, Mr. Beckley for some reason proceeds from the fact that our country will certainly rush to “seize the Baltic States”, and the Celestial Empire - Taiwan. He bashfully keeps silent about what to do if the stakes are much higher (for example, to smash the United States itself in half). But the most interesting thing is that the Pentagon, it seems, just intends to adhere to approximately the same strategy that was outlined on the pages of Foreign Policy! As evidence of this assumption, for example, it is quite possible to consider such a fact as the statement made recently by General Charles Brown, commander of the US Air Force in the Pacific and Indian Oceans, that the deployment of American medium and shorter range missiles in this region would be "Certainly good for the US." Somewhat similar thoughts were expressed by the head of the Pentagon, Mike Esper ...

There are other signs - perhaps not so large-scale, but not becoming less significant from this. For scouts all over the world, it has long been an axiom of the postulate that the definitive evidence as to which war this or that army is preparing for is the answer to the question: what exactly is it armed with? The United States military budget for 2020 is huge. The appropriation of the year this year it exceeds $ 22 billion. The priority, according to statements made by senior officials, will be the creation of the Space Forces, modern missile defense and air defense, as well as other projects for "decisive modernization and re-equipment of the army." At the same time, more than 700 million are clearly planned to be allocated to “contain Russia”. Most of these funds are likely to be utilized as part of the EDI program, the so-called European Security Initiative. That is, for the most part they will be spent on creating in the Old World the very "outposts" of the Pentagon, from which, obviously, his leadership plans to attack Russia if necessary, exposing the territory of the Allies, but not their own. It is very likely that the US army is nevertheless preparing for a "small victorious war" in Europe, in the process of which our country should be "indicated its place", paying for it more with the lives of Europeans than Americans. In any case, some data concerning the new weapons and equipment that began to arrive in the US Army and Marine Corps testify to this. For example - the new M320A1 grenade launchers, pistols and sniper rifles Mk13 Mod 7 for Marines, the improved night vision devices ENVG-B, reinforced body armor and protective helmets for the "hunters".

However, all this, perhaps, trifles. But the massive deliveries to the troops of the deeply modernized Abrams M1A2C tanks are unlikely. The main armored vehicle of the US Army was "stuffed" to fame: here you are brought to almost the equivalent of 800-900 mm the latest armor protection, and the "smart" Vehicle Health Management System, which monitors the condition of components and assemblies, and the active protection complex "Trophy- HV ”, and a damn breakthrough of similar expensive and high-tech“ toys ”that turn this already weak tank into a serious enemy. Another point, much more characteristic: the US military has invested considerable amounts in sharply doubling the production of guided air-to-ground missiles of the Joint Air-to-Ground Missile (JAGM). They should replace themselves pretty obsolete from the moment they were adopted by the AGM-114 Hellfire. The point here is that the new missiles are fundamentally no different from the "hellfire" that drove terrorists through deserts for many years. The parameters, of course, are higher, but, according to military experts, for conducting combat operations against an enemy with a more or less modern air defense system, they are completely useless. About the "Shell", "Torah" and other similar complexes, and we are not talking. Why then such investments? Is Washington planning to “bring the light of democracy” to some other underdeveloped country, which unfortunately turned out to be the owner of oil fields? Or does he hope that the plans developed by some clever men in the Pentagon for “hacking” the so-pissing Americans of the Russian “closed A2AD protected zones” will still be possible to realize, and then everything will come to hand? It may very well be.

In truth, it would have been better if American political observer William Connolly turned out to be the one who put forward the version that the Pentagon’s feverish activity was caused not by a real desire to fight, but by an attempt to “save its image”, which was “pretty shaky” after the US Army suffered a number "Technical defeats" in the Middle East. Now they are trying to at least impress the Europeans with teachings of unprecedented proportions, until they began to strengthen their own armies to the detriment of the "North Atlantic Brotherhood." It would be good if that was how it was ...
Ctrl Enter
Noticed oshЫbku Highlight text and press. Ctrl + Enter
We are
Turkey’s purchase of S-400 will mark the beginning of the end of NATO
Ten "defeats" of Putin
Reporterin Yandex News
Read Reporterin Google News
33 comments
Information
Dear reader, to leave comments on the publication, you must sign in.