Russia and China “pushed” by Boeing and Airbus

10 May 2018
0
Russia and China are jointly prepared to end the dominance of the United States of America and the European Union in the air. The promising Russian-Chinese wide-body airliner, code-named CR929, should “push” the American Boeing and the European Airbus in the civil aviation market. 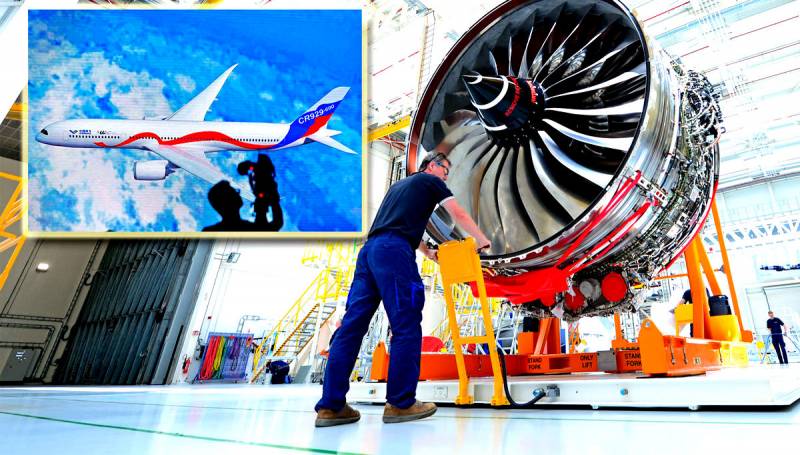 Preliminary agreements on the possibility of implementing such a project between the Russian Federation and the People’s Republic of China took place in 2014, when relations between Moscow and Western countries began to cool after President Putin’s visit to Beijing. In 2016, the main agreement was signed between the United Aircraft Corporation and the Chinese state-owned aerospace manufacturing company equipment.

In 2017, the future airliner got its name - CR929, where C - means China, and R - Russia. China ranks first in the project because of greater contribution: according to the agreements reached, the Russian side will produce wings and plumage for aircraft, and Chinese production facilities will be involved in the creation of metal-composite fuselages, as well as for final assembly. However, in Russia there will be an engineering center involved in the development, and all technical documentation will remain at the disposal. Engineers claim that the future airliner will meet all the requirements of the civil aviation market, thanks to high-tech solutions and ultra-modern composite materials.

The flight range of the Russian-Chinese aircraft is designed to cover a distance of 12 kilometers. The basic version can comfortably carry up to 000 passengers. It is planned to create two versions of the liner with a different number of passenger seats: the "younger" is designed for 280, and the "older" - for 230 seats.

It is worth noting that even with the combined efforts of Russia and China at the initial stage, it was not possible to completely get away from the use of Western components. In the first flights, the CR929 will go with General Electric or Rolls-Royce aircraft engines. After 2030, Russian PD-35 engines can be installed on liners.

The implementation of the ambitious aircraft construction program is estimated at 13 billion dollars, Moscow and Beijing share the costs in half. The budget includes an additional $ 7 billion to create a global system for the supply of spare parts for long-haul airliners. According to its claimed characteristics, the CR929 is comparable to the Boeing-777. Thanks to the assembly in China, its price can be 20% lower than American and European competitors.

According to the developers, the Russian-Chinese airliner will make its first flight in 2025.
Ctrl Enter
Noticed oshЫbku Highlight text and press. Ctrl + Enter
We are
Russia itself “clipped wings”
China kicked Russia out of Africa
Reporterin Yandex News
Read Reporterin Google News
Information
Dear reader, to leave comments on the publication, you must sign in.