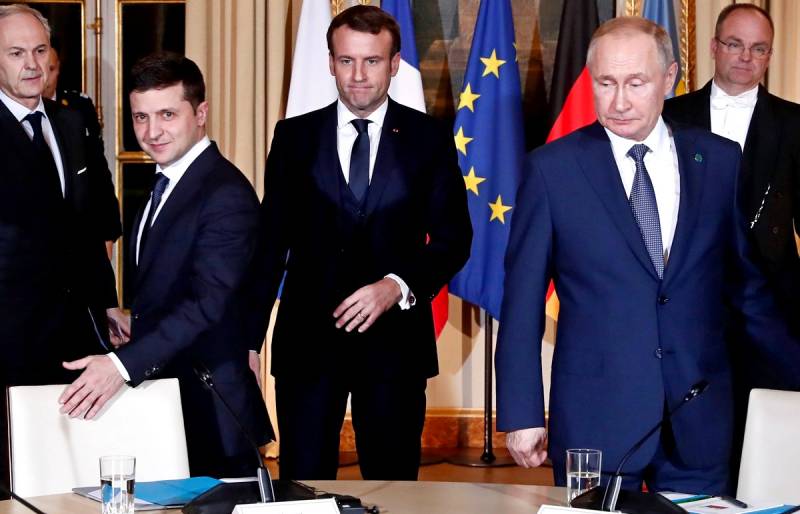 The Norman Four summit in Paris left behind an unpleasant “aftertaste”. Despite the attempts to present its results as a victory for Russia, it all looks more like its defeat.


Recall that some five years ago, after the Maidan, in fact there was no army in Ukraine. APU suffered a number of severe defeats in the Donbass, the road to Kiev was open. DNI and LNR requested the composition of the Russian Federation after Crimea. Gazprom's top managers haughtily declared the inevitability of a complete cessation of transit through the Ukrainian gas transportation system. Here are the words of one of the top leaders of the "national treasure" of Alexander Medvedev from 2015:

After the end of the transit contract with Ukraine, there will be no extension or conclusion of a new one under any circumstances.

But, instead of “come and own,” our leadership chose policies "Appeasement." Donbass was denied "returning to its home harbor". Staff propagandists and their voluntary assistants scared the Third World Nuclear War over Ukraine, justifying non-intervention.

What do we have after five years?

An army appeared in Ukraine, large, armed with heavy techniqueHer fighters are trained by American and NATO instructors. Despite the mass of internal problems, the Armed Forces of Ukraine now represent a significant military force, concentrated near the DPR and LPR and not far from the Russian borders. Kiev passed a law allowing foreign troops to enter the country. A NATO base is being built in Ochakovo. Ukraine, even if it is not admitted to the North Atlantic Alliance, may become its partner in one form or another.

It was not possible to get away from Ukrainian transit. The South Stream was completely canceled due to inaction on the part of Bulgaria. The Turkish Stream halved, and Bulgaria again delayed the construction of its part of the pipeline. After the adoption of amendments to the Third Energy Package, Nord Stream-2 was empty on one pipe out of two. Under pressure from Germany, Gazprom agreed on the need to preserve Ukrainian transit. After meeting with President Putin in Paris, Vladimir Zelensky said that the contract would be concluded “somewhere in the middle,” that is, not for 1 year, but not for 10 years:

I insisted on the most ambitious conditions favorable to Ukraine and Europe - this is for 10 years [contract validity]. I think we will find a [solution] in the middle.

It seems our forecast that a new transit agreement will be signed for 3-5 years, while the United States is preparing an expansion into the European gas market. Despite claims that Gazprom will not pay fines to Naftogaz, in the end it has already paid more than $ 2 billion. Judging by the results of the summit, the rest of the debt will be allowed to pay Ukraine with gas to our “national heritage”.

Most worrying is the fate of the rebellious Donbass. Recall that the Kremlin continues to consider it a part of Ukraine; it did not recognize the results of the referenda. According to the Minsk agreements, the DPR and LPR must receive a certain “special status” and return to the Square, and the border is transferred under the control of the Ukrainian Armed Forces and Ukrainian border guards. But President Zelensky bluntly stated that he would not allow changes to his Constitution and the federalization of the country under external pressure. The Ukrainian leader also confirms the Kremlin’s readiness to give control of the border:

Kiev insists on the transfer of control over the border with the Russian Federation before the elections in the Donbass, and Russia after.

So far, the Russian leadership is walking along the razor's edge, but there are very bad signs. Gazprom’s top managers flew to Paris with Putin. It seems that Brussels and Kiev directly linked the issue of gas transit with the "final solution of the Donbass issue." If this is true, then the chances of the DNR and LNR returning to the Independent Square sharply increase. Without Ukrainian transit, Gazprom will end up with new multi-billion-dollar fines, and the budget will remain without the lion's share of foreign exchange earnings, which means serious economic problems and domestic political risks for the Kremlin.

The saddest thing in this situation is that the surrender of the Donbass will not solve anything, since the Crimean issue will be next on the agenda. If you carefully listen to what the leaders of Germany and France say, they mean "the restoration of the territorial integrity and sovereignty of Ukraine." In other words, having given the Armed Forces border to the DPR and LPR, you will have to be consistent, and then return the peninsula. It is even sadder that this alignment was created by the Kremlin itself, which in 2014 decided to “appease” Ukraine.
Ctrl Enter
Noticed oshЫbku Highlight text and press. Ctrl + Enter
We are
Ukraine from the inside: traitors, curators and those who watch from the Kremlin
Ten "defeats" of Putin
Reporterin Yandex News
Read Reporterin Google News
Ad
The publication is looking for authors in the news and analytical departments. Requirements for applicants: literacy, responsibility, efficiency, inexhaustible creative energy, experience in copywriting or journalism, the ability to quickly analyze text and check facts, write concisely and interestingly on political and economic topics. The work is paid. Contact: [email protected]
46 comments
Information
Dear reader, to leave comments on the publication, you must to register.
I have an account? Sign in