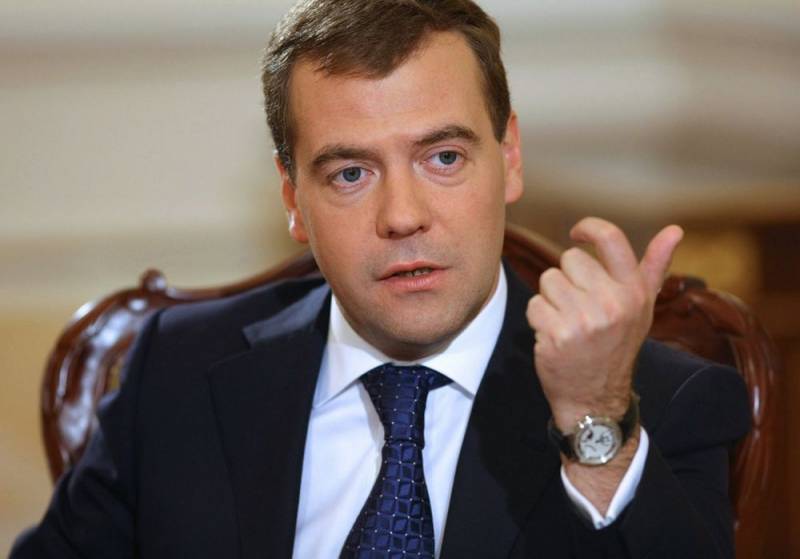 Recently сообщалосьthat Russia has begun dismantling part of the equipment intended for the transit of Russian gas through Ukraine to Europe. And so, on December 7, 2019, Russian Prime Minister Dmitry Medvedev called the only condition for maintaining this transit.


The head of the Russian government said that Kiev and Moscow would not agree on gas issues until all legal disputes between NAK Naftogaz Ukrainy and PJSC Gazprom were resolved. About this Medvedev told the program "News on Saturday" on the channel "Russia 1".

The head of the Russian government emphasized that Kiev and Moscow should come to a “zero option”, i.e. continue cooperation from scratch.

Like this expression or not, but it should be a mutually beneficial solution for both parties.
- said Medvedev.

He recalled that by reverse Ukraine receives the same Russian gas, “but much more expensive than it could receive,” buying it directly.

This price may be lower, but for this you need to agree
- explained Medvedev.

In addition, Medvedev recalled the classics (Ilf and Petrov), who wrote in one of his works that consent “is a product with complete non-resistance of the parties.” Medevedev said that it is impossible to impose a transit tariff on Russia, which has grown five times and to demand a discount on gas.

Well then there will be nothing
he explained.

Medvedev added that it is impossible to agree on gas and at the same time say that Moscow is obliged to pay the legal costs of the Ukrainian company.

Medvedev drew attention to the fact that the termination of gas transit is a difficult decision. After all, Russia is worried about consumers in Europe, as a bona fide supplier. At the same time, when asked whether Russia could prohibit European countries from reversing gas to Ukraine, Medvedev replied that “it is quite difficult from the point of view of technological control.”

At the same time, Medvedev pointed out that Kiev must fulfill its international obligations, regardless of who is in power. This fully applies to Ukraine returning a debt of $ 3 billion to Russia.

But it was not Yanukovych who took it. It took the Ukrainian state, which is responsible for this duty.
- noted Medvedev.

Moreover, Medvedev recommended that the Ukrainian leadership should not shy away from meetings in the CIS format. Since this can help in solving many accumulated issues

After all, all the problems in the modern world from misunderstanding
- summed up Medvedev.

We remind you that PJSC Gazprom is still awaiting from Naftogaz Ukrainy NJSC a constructive position on economically sound gas transit conditions since 2020.
Ctrl Enter
Noticed oshЫbku Highlight text and press. Ctrl + Enter
We are
In Russia, they announced the liquidation of infrastructure for gas supplies to Ukraine
Russia called the final condition for partnership with Ukraine on gas
Reporterin Yandex News
Read Reporterin Google News
Ad
We are open to cooperation with authors in the news and analytical departments. A prerequisite is the ability to quickly analyze the text and check the facts, to write concisely and interestingly on political and economic topics. We offer flexible working hours and regular payments. Please send your responses with examples of work to [email protected]
6 comments
Information
Dear reader, to leave comments on the publication, you must sign in.