“Happy childhood” in the USA: is it worth giving the Americans our children? 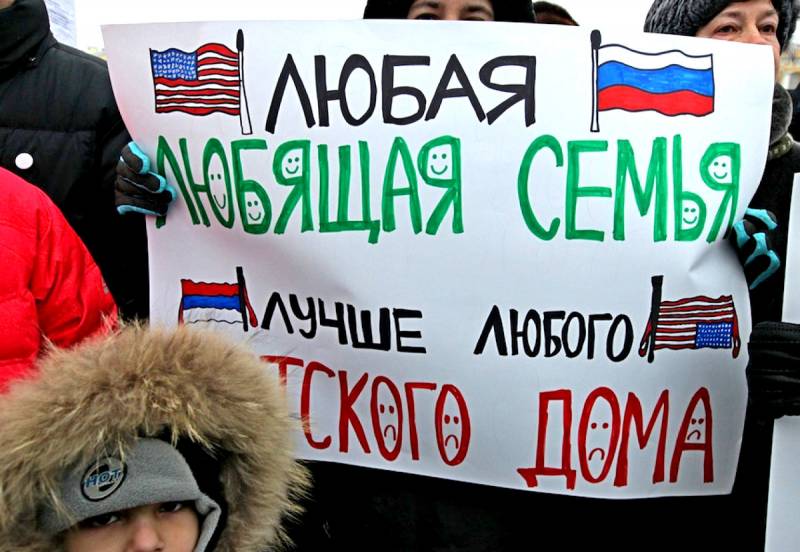 The idea of ​​extending the "Dima Yakovlev Law", the main point of which is the ban on the adoption of children from Russia by US citizens, not only in this country, but also in other states where the rights of our compatriots are infringed, has already caused a rather mixed reaction. And this is still the “lamp of liberal thought" did not connect properly ...


However, before “letting all dogs go” to the deputy director of the consular department of the Russian Ministry of Foreign Affairs Ruslan Golubovsky who expressed this proposal, it is worth at least trying to objectively assess both the causes and consequences of the state decision mentioned above. And, at the same time, try to figure out - are there any prerequisites for expanding its jurisdiction?

To begin with, it should be mentioned that this initiative was put forward during the round table held by the Council of the Russian Federation on legislative improvement of mechanisms to protect the rights and interests of Russians abroad. And the words of Golubovsky that the tendency observed today to increase the number of their violations, urgently requires new, more effective response mechanisms, neither reinsurance, nor exaggeration, alas, can not be called. It is enough to recall a number of extremely unpleasant incidents not so long ago that occurred with Russian citizens in the United States. And, judging by the steadily growing Russophobic rhetoric of official Washington and the calls regularly made from there to compile more and more “proxy lists” for us, it is hardly worth expecting an improvement in the situation. However, let's leave aside purely political aspects of the issue brought to life by the confrontation between our country and the "Western world". Much more important in this situation, another question seems: how long have the truth become, alas, the commonplace cliches of the assertion that by blocking our children’s path to the same USA, they are deprived of some kind of "earthly paradise", the prospects to grow and live in the same a fabulous country of goodness, justice and wealth?

Even if we admit that the United States, according to the statement revered by the domestic “liberal democratic community”, is not just an axiom, but the main and unshakable postulate of their worldview, they are a kind of “promised land”, but this “fairy-tale country” some kind of, very mildly speaking, peculiar ... Strange kind of "paradise" that smacks of, if not gray, but now, for example, for sure, gunpowder. In the USA, a child dies from gunshot wounds every three hours! This disaster, according to the Americans themselves, has already taken on the character of a "national epidemic." During the period from 2000 to 2018, more people died in the “school shootings” that became commonplace for the country than were killed under similar circumstances throughout the 66th century - 22 people in 77 incidents. Since that time, this mournful list has increased significantly. It should be noted that in 40% of cases, the students themselves fired on fellow practitioners and teachers. Death from a firearm is the second most common cause of death in American children and adolescents, second only to traffic accidents. However, this evil has every chance to come out on top in the very near future. If the number of children who died in car accidents in the last couple of decades is steadily decreasing, then the number of people who have found their death from a bullet is not only not decreasing, but rather increasing. At the same time, about half of the victims die at the hands of killers, about 13% - as a result of suicide. What can we say about military weapons if, according to the recently published report of the Center for Research and Policy on Injuries at the US National Children's Hospital, only from pneumatic and airsoft "trunks" in the country receive serious injuries, including leaving them crippled for life, an average of XNUMX and a half thousand children a year!

Weapons are far from the only problem that threatens the health and lives of children in the United States. According to official data two years ago, in terms of mortality in the first year of life (22 thousand cases per year), the country was far ahead not only of Greece, but also countries such as Hungary and Slovakia. Yes, of course, this takes into account babies born in dysfunctional ghetto families and children of migrants, but still this situation somehow does not fit in with the ideas about “the most advanced medicine in the world” that have been instilled into us for so long, isn't it ? And the "developed countries" in terms of the number of infant deaths in the United States are ahead of all by 76%. This is not fiction, but the data published by the same doctors in the publication US News Best States. Again, an American doctor from Johns Hopkins Hospital, Ashish Thakrar, is inclined to believe that the country does not provide its children with a “safe, full and healthy life,” citing “weak social protection, stable high poverty and low educational level” as the reasons for this. Either the American Thakrar is lying, or our liberals ... There is one of two things. According to, again, official research, 10% of American children and adolescents live in families with alcoholic parents, and about 3% are drug addicts. The result is logical - the average age when children "get involved" in alcohol and drugs in the United States is 14 years. About half of American teenagers between the ages of 14 and 18 use alcohol or certain drugs regularly. After that, the data indicating that between 2006 and 2016 the number of suicides among children and adolescents there increased by 70% among whites and by 77% among black people look completely unsurprising.

The deadly "flowers of life"

However, the kids themselves and, as they are called at home, teenagers in the United States are still adorable creatures. Already the blood in my veins runs cold at times, when in news new descriptions of their "cute pranks" appear on the tapes. This year in Georgia, 16-year-old Kevin Watkins was sentenced to life in prison for strangling his own sister. I got so carried away that even the rescuers who came to the call could not tear it off ... The reason was more than weighty - the password to the family Wi-Fi changed by a relative, which became an obstacle for the teenager to "hack" into computer games. A 14-year-old boy from Eltmond, Alabama, this year easily shot all his family members - five people. But Kyle Elwood, who in April of this year set fire to the family "mobile home", as a result of which his great-grandmother, stepfather, brother and sister (a year and two years old) and two-year-old cousin were burned to death, was only nine. The judges of the state of Illinois, where the hearings in this case are being held, were completely at a loss - in front of them, in the dock, sat a roaring schoolboy with legs that did not reach the floor. Nevertheless, according to investigators, he staged the arson completely deliberately ... Against this background, a 16-year-old teenage girl from the same Georgia, who planned to massacre the black parishioners of the local Episcopal church in the small town of Gainesville, does not even look too ominous. ... Fortunately, the young racist did not differ in special intelligence and went to the temple when there was no one there. In addition to the police officers who were waiting for her, who learned about the impending massacre from the classmates of the failed terrorist, who willingly shared her plans with her fellow practitioners. That's right, some of the freshest ...

Teenagers who organize massacres in their own schools, who shoot and burn their own families in the United States, have not really shocked anyone for a long time. As, however, and killing their own teachers. Well, except that the case of the 14-year-old Philip Chizm, literally jabbing his own math teacher in the school toilet, and even mocking his body so much in 2017, was recognized as "out of the ordinary." However, regarding teachers ... Only in the last couple of decades, a dozen representatives of this profession were arrested and convicted for seducing minors in the United States. Mistresses of a reasonable, kind, eternal ... I think, after the above examples, no one will be particularly surprised by the fact that the United States of America is the state with the highest level of detention of children in the world. According to independent experts, in various places of deprivation of liberty there are more than 100 thousand children! I’m making a reservation, to a large extent, it is about migrants, first of all, children who are separated from their parents on the border with Mexico, where the current president launched a real war against “illegal immigrants”. But their children are not people, or what ?! Yes, and to their own little citizens the American Themis is still showing "mercy." If you didn’t know, in 41 US states minors may be sentenced to death. In some "strongholds of democracy" - from 13 or 14 years. Yes, as a rule, such sentences (and they are issued in hundreds) are not carried out. They are “humanely” replaced by life imprisonment. Moreover, without the right to early release. Happy American childhood ...

Since 1991, when the adoption of Russian orphans by the Americans became possible in principle until the adoption of the "Dima Yakovlev Law," in 2013, according to various estimates, from 45 to 60 thousand of our little compatriots were taken abroad. It is reliably known about two dozen of them killed by adoptive parents, Americans. However, according to many experts, this data is far from complete. And indeed, bullying and violence were not always fatal. For example, the fact that Maxim Kuzmin, who died in the United States in the same ill-fated 2013, was literally pumped up by the adoptive “mother” with potent psychotropic drugs and other drugs of a dubious nature only as a result of an investigation into his death. However, there is reason to believe that he was far from alone going through the throes of such compulsory “treatment”.

And finally, the most important thing: what did the ban on adoption by US citizens give Russian children? We will not go into the intricacies that require a separate and detailed analysis; we will dwell on some key figures. Since 2012, the number of orphans in children's homes in Russia has not increased, contrary to forecasts of opponents of the Law, but has almost halved. Yes, the number of foreign adoptive parents fell by three already by 2015, but the state, by increasing payments for foster families, was able to stimulate its own citizens to ensure that orphaned houses were empty. And by the way, if anyone forgot, this year the Russian Ministry of Education prepared a law that substantially corrects the rules of adoption and guardianship. Not everyone approves of him, however, as for me, the provision on the psychological examination of all members of the future foster family is very correct. No one is trying to argue that there are no problems for orphans, including adopted ones, in Russia. However, this is after all their homeland. What is a country worth giving its children not just to citizens of other states, but states, let's call a spade a spade that is openly hostile to it? Yes, and those where they can not ensure safety, even those born there? In light of this, it is quite possible that the initiative voiced by the Russian Ministry of Foreign Affairs is even worth considering seriously.

We are in Yandex Zen
It's important
3
They lied to us for 70 years? Who was Lenin really?
Where is Russia going?
Reporterin Yandex News
Read Reporterin Google News
5 comments
Information