Nord Stream 2: Kiev is ready to stop the gas pipeline at all costs 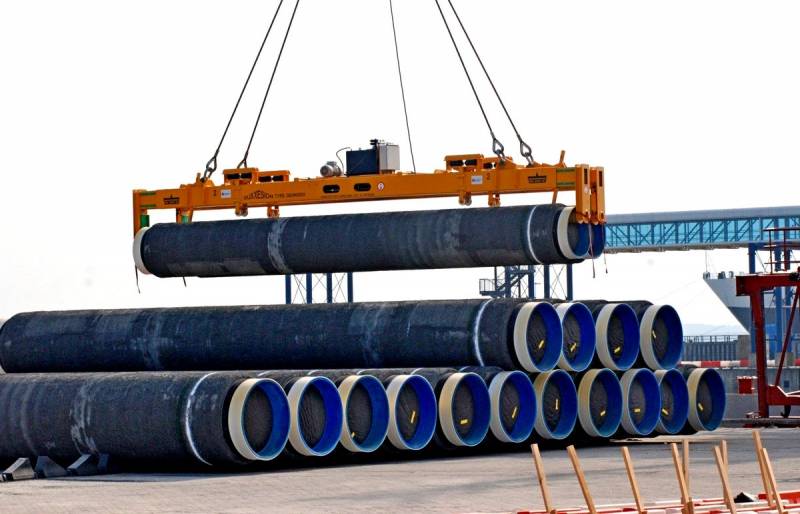 The long-awaited decision made on October 30 by the Danish Energy Agency, at first glance, removed the last obstacle to completing the construction of the Nord Stream-2 gas pipeline. However, his opponents, both overseas and in Europe, have absolutely no intention of abandoning attempts to put sticks in the wheels of this project. They compensate for their small numbers by their stubborn stubbornness and truly devilish ingenuity in inventing more and more new lines of attack on the energy project, which is today the main thing for Russia.


At the moment, one can clearly define the three main “fronts” on which Gazprom will face more or less fierce “battles” for it. And, of course, there are hidden threats that some people preserve as a "weapon of last chance." What exactly is it about and how serious can the consequences of these trepidations be?

Washington is not appeasing

Perhaps there is no country in the world that, in reality having the least relation to the pipeline under construction, would fight against it as fiercely and consistently as the United States. Among the high-ranking officials and prominent politicians there is hardly one who would not speak out about the "terrible danger" that regular and large-scale supplies of Russian "blue fuel" pose for "energy independence of Europe." The last, if I am not mistaken, was the US Secretary of Energy Rick Perry, who spoke about a "crushing blow to security" and "strengthening of Moscow's foreign policy positions." However, no - then there was also a speech by Secretary of State Mike Pompeo, who threatened the EU with "complete dependence on the whims of the Kremlin" after the gas pipeline was launched. Tellingly, in the Old World itself, not a single state sees any troubles for itself from the launch of Nord Stream 2, except for the already obvious puppets of Washington. On the contrary, only continuous benefits ... But from overseas, probably, it is better known. A burning desire to flood Europe with its own LNG prompts the Americans to go to any tricks in order to, if not stop, then at least slow down the Russian project at least for a while. They could - they would gnaw his steel pipes at the bottom of the sea with their teeth ...

Apparently, they firmly killed the same Germans - it was not for nothing that literally last week in the Bundestag they spoke loudly that the American liquefied gas was "not needed by Germany in principle." Moreover, some of the deputies (the same Alexander Noah) believe that if the USA imposes real sanctions aimed at disrupting the construction of the Nord Stream-2, Berlin should immediately respond with no less serious restrictions. Nevertheless, demonstrating once again a magnificent contempt for the opinion of its own overseas "allies", the United States continues to rush with the next "restrictive" projections. In particular, Jim Rish, chairman of the Senate Committee on Foreign Affairs, told reporters about such intentions "on the sidelines" of the International Security Forum in Halifax. Moreover, according to him, the sanctioned confrontation with Nord Stream-2 should be laid down in a fairly serious document - the law "On National Defense" of the country for next year. At the same time, the senator expressed his firm conviction that opponents of such an initiative should not be found under the dome of the Capitol, a priori declaring all those who disagree with it (if nevertheless found) as “lobbyists of Russia” and almost enemies of the American nation. For European companies involved in the construction of the gas pipeline, these restrictions on the assurances of Rish will be so “expensive” that we will talk about their “closure”. As a result, “the Russians will have to look for other contractors” and the construction site will again rise indefinitely. Bingo!

In reality, most likely, this is simply about “reincarnation” of sanctions against those who provide or “assist in providing” the Gazprom project by selling, renting or in any other way, “vessels for laying pipes at a depth of more than 30 meters ". The bill on them this summer was developed by senators Gene Shahin and Ted Cruz. He suggested not only a ban on the entry of “guilty” into the United States, but also “freezing of their assets in US jurisdiction”. True, this initiative, which seems to have begun to be quite successfully implemented within the walls of the Congress, somehow quietly “hung” at the level of countless approvals and statements, without even reaching the White House. Most likely, the same fate will befall a new demarche. Especially when you consider that the Risham Act mentioned there are plenty of other "stumbling blocks" that are quite capable of turning its discussion into disputes without end and end. For example, the question of financing the wall on the border with Mexico, the construction of which has long turned into an obsession for Donald Trump, a discussion of the future of American facilities in Guantanamo and so on. There are fundamental issues at all, such as a “redistribution” of authority between the US branches of power to wage wars, send troops out of the country and return them. There is no doubt about one thing - the issue of sanctions against Nord Stream-2 will be very widely exploited by the American politicum in the upcoming election campaign. Will they be introduced? It is doubtful, although not excluded. But they will talk about the “Russian energy threat” for a long time ...

Warsaw goes to the “frontal attack”, and Kiev is preparing a stealth strike

It is clear that the United States, as befits the international "godfather", does not carry out the most vile actions against the gas pipeline, but entrusts it with its own "sixes." It is precisely such a role that Poland has recently been playing with all zeal, for the umpteenth time attempting to harm construction as much as possible. Warsaw’s interest here has two sources: firstly, they plan to become the “gas gate” of the United States, firmly seated on deliveries of overseas LNG to Europe and have a rather big profit on this. Secondly, the Poles oppose and will oppose any Russian project simply because it is Russian. Not without reason, Donald Tusk, who has served himself up to the President of the European Council, continues to repeat about our country as the main "strategic problem" of the EU, not hesitating to mention that even his own colleagues called him a "maniac" for such stubborn Russophobia ... And who then command me to consider the Prime Minister of Poland, Mateusz Moravecki, in his own anti-Russian rage that has reached the point where Nord Stream-2 is “paying for Russian weapons with European money ?!” However, Warsaw is not trying to “beat the ruble” so far in any way with Moscow, but with its own EU neighbors. In any case, the phantasmagoric fine of $ 45 million by the Polish Competition and Consumer Protection Authority (UOKiK) “hung” on the French company Engie, which was involved in the construction of the gas pipeline, and refused to provide Warsaw’s first finger documents for review distribution, sale, supply and storage of "Russian" blue fuel ".

That’s all for the Poles, you see, was vital for a “very important antitrust proceeding in the Nord Stream-2 case. The French did not penetrate ... In Warsaw, by the way, they directly stated that the fine was only the beginning. In general, the consequences of their "investigation" will be "international in nature." Like, get ready - both in France, and in Germany, and in Denmark: Poland will teach you all to love Europe! In any case, in the “antitrust production” launched by UOKiK, in addition to Gazprom and the already mentioned French corporation, Uniper, OMV, Shell, Wintershall also appear. In a word, all, almost all the participants in the project, who dared to start its implementation without the approval of Warsaw (which would never have followed!), And thus allegedly violated the "European legislation". According to authoritative experts, all this fuss, of course, will not be able to stop the construction (the same French immediately declared all Polish claims nonsense and intend to appeal them), but that's completely to spoil them. Do not forget that it was the Polish litigation that this year led to a decrease in half the volume of Russian gas supplied to Europe through the OPAL gas pipeline. The scandalousness of Warsaw is well known to everyone in the Old World, so there is no doubt that they will still drink our blood as much as they can. In addition, it should be borne in mind that the Poles conduct their Russophobic activity in close alliance with the Baltic countries, as well as with Ukraine. Thus, Lithuania has already announced its intention to bring to trial the operators of the gas pipeline under construction. Estonia is still thinking, but, quite possibly, will also join. And Kiev ...

Statements about his firm intention to “stop Nord Stream-2 at any cost”, relying on “support from European partners”, have recently been made by almost all officials “from the ground up” - from the local prime minister Alexei Goncharuk to the country's trade representative Taras Kachka . Of particular interest to us are the revelations of the Ukrainian Minister of Energy Aleksey Orzhel, who recently admitted on television that Kiev intends to block construction by appealing “somehow from an environmental point of view” (verbatim quote). That is, to appeal against the permit issued by Denmark for laying pipes in its waters. The most unpleasant thing is that these words are just not an empty chatter. The "greens" started stirring suspiciously in Northern Europe, which, it seems, some forces intend to mobilize in the very urgent order for the "last and decisive battle" just against Nord Stream-2. Once again, long-standing tales surfaced about "8 thousand tons of chemical munitions," allegedly "thrown to the bottom of the sea off the island of Bornholm by the Soviet Union during the Second World War" and even "four Soviet ships with chemical munitions sunk there." Interestingly, the same Norwegian greens for some reason indicate exactly the places where the pipes of the Russian gas pipeline should lie, while screaming at the same time about the "threat of environmental disaster" that will certainly happen when they are laid. Naturally, there is no mention of any documentary and generally sound evidence of these phantasmagoric nonsense. As such, gentlemen, "ecologists" give out information that in recent years in the networks of fishers in this section of the Baltic, "explosive objects" have hit as many as four times! Well, given the intensity of the hostilities that took place in this region, it is amazing how such “surprises” do not come across to fish every day.

Nevertheless, if this topic is reanimated again, it means that it is most likely intended to be used as the last trump card. It is possible that is exactly what the Ukrainian Minister of Energy had in mind. Be that as it may, this possibility cannot be completely discounted. All kinds of “environmental” movements and parties in Europe today have too much weight - from quite solid to frankly marginal. If all this pack is lowered to Nord Stream-2, it will not seem to anyone. In the light of such a prospect, Greta Tunberg, who suddenly “emerged” out of nowhere just in Scandinavia, is intensely “untwisted” today as not only an environmental project. One way or another, but Russia needs to be ready for ever new “battles” for Nord Stream-2, which, apparently, will not stop either after laying the last meter of its pipes, or even after successfully putting the pipeline into operation.
Ctrl Enter
Noticed oshЫbku Highlight text and press. Ctrl + Enter
We are
Europe dealt a treacherous blow to Gazprom, slashing itself
The “oil war” with Russia: the “shale revolution” in the United States came to an end
Reporterin Yandex News
Read Reporterin Google News
9 comments
Information
Dear reader, to leave comments on the publication, you must sign in.