After setting fire to the Typhoon armored vehicle, the Kurds recorded an appeal to Russia 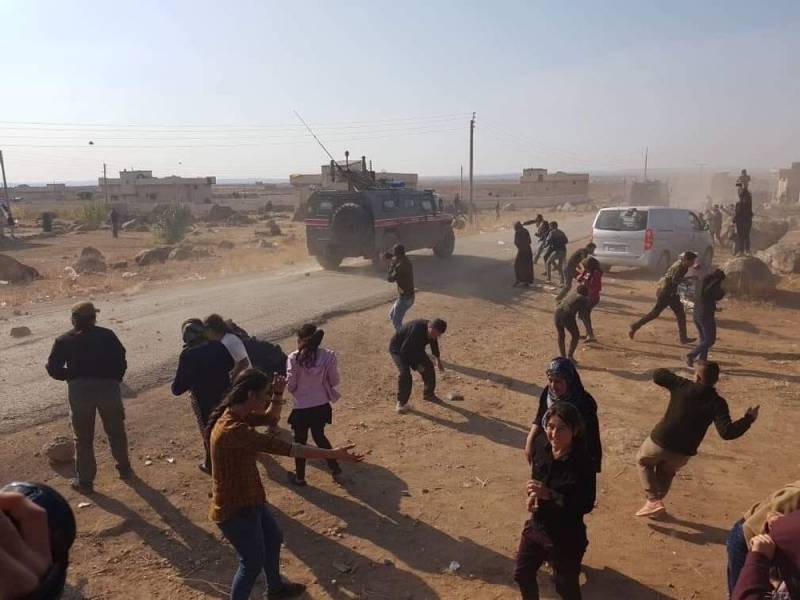 November 18, 2019 we Reportedas the Kurds attacked a joint patrol of the military police (VP) of the Russian Ministry of Defense and the Turkish army in Koban in northern Syria. Then, during the attack, the Kurds first used the Molotov cocktail. And so, the Kurdish military recorded a video message in which they apologized for this incident, as a result of which they threw the mentioned Molotov cocktail into a Russian armored car.

On November 18, in Kobani, a joint patrol convoy, which also included Russian cars, was greeted by an aggressive group of residents who threw stones and Molotov cocktails at the patrol. We express our deep regret over the incident, in connection with which appropriate measures will be taken to ensure that this does not happen again in the future.
- said in a video message from the Kurdish military.


The Kurdish military emphasized that they believe in the ability of the Russian Air Force, located in this and other areas of Syria in accordance with the Sochi Memorandum, to "guarantee peace and security of the region’s population." Although it is necessary to remindthat this is not the first attack. Prior to this, the Kurds had already attacked Russian armored vehicles with stones and sledgehammers, trying to inflict as much damage as possible.

It should be added that the Russian Air Force has already proved its effectiveness in previous years. Now the Russians are not leaving the Kurds alone with the Turks, who would not have become ceremonial with them. So it’s good that among the Kurds there are understanding and sensible people speaking with similar video messages and condemning their close-minded pro-American fellow tribesmen.
Ctrl Enter
Noticed oshЫbku Highlight text and press. Ctrl + Enter
We are
Break antennas, break windows: Kurds attacked the Russian patrol
"Curvy, get out of Poland!"
Reporterin Yandex News
Read Reporterin Google News
Ad
The publication is looking for authors in the news and analytical departments. Requirements for applicants: literacy, responsibility, efficiency, inexhaustible creative energy, experience in copywriting or journalism, the ability to quickly analyze text and check facts, write concisely and interestingly on political and economic topics. The work is paid. Contact: [email protected]
1 comment
Information
Dear reader, to leave comments on the publication, you must to register.
I have an account? Sign in