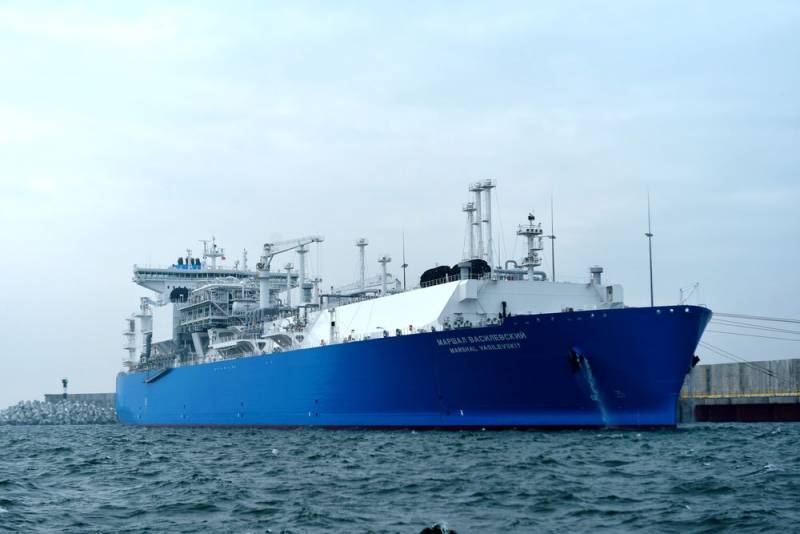 Recently it became known that the Marshal Vasilevsky vessel, built in South Korea at the Hyundai Heavy Industries shipyard to supply gas to the Kaliningrad region, was leased for three months by Gazprom to a major international trader Gunvor. Marshal Vasilevsky is not just a gas carrier, but the only floating regasification (LNG from liquid to gaseous) installation in Russia (capacity of 2,7 billion cubic meters of gas per year), created on the basis of a gas transportation tanker .


As the RBC, "Marshal Vasilevsky" is now heading to the port of Rotterdam (Netherlands). At the same time, sources close to Gazprom suggest that the company does not want to incur losses due to the downtime of the vessel, so it was leased and used as a tanker (gas carrier).

For example, Roman Kazmin, the head of ICIS Heren LNG, is confident that the freight rate is $ 80 thousand per day and it can be extended with the consent of the parties under favorable market conditions. Another source said that the deal was concluded in September 2019 and the lease will last from November 2019 to February 2020. At the same time, the rate was lower than the market, at that time it supposedly amounted to $ 100-130 thousand per day), but now it is much lower.

We remind you that in February 2019, in Kaliningrad, in the presence of Russian President Vladimir Putin, a sea terminal for receiving LNG with a capacity of 2,7 billion cubic meters was launched. m of gas per year ("Marshal Vasilevsky"), which fully covers the needs of the region. The creation of an alternative gas supply system for the Kaliningrad region cost Gazprom about 85 billion rubles. The ship was needed in case the EU countries block the gas pipelines to the region. Therefore, it is not surprising that the company does not want it to just stand at the pier.

It should be added that on November 8, 2019 it became known that the Marshal Vasilevsky vessel, previously used by the Austrian OMV as a gas storage in the port of Rotterdam, leaves for the United States, where it must pick up LNG from the Sabine Pass port in Louisiana and deliver it to Europe.
Ctrl Enter
Noticed oshЫbku Highlight text and press. Ctrl + Enter
We are
Ukraine will buy American gas from Poland
The vessel, designed to ensure gas safety of Kaliningrad, sailed to the EU
Reporterin Yandex News
Read Reporterin Google News
Ad
We are open to cooperation with authors in the news and analytical departments. A prerequisite is the ability to quickly analyze the text and check the facts, to write concisely and interestingly on political and economic topics. We offer flexible working hours and regular payments. Please send your responses with examples of work to [email protected]
3 comments
Information
Dear reader, to leave comments on the publication, you must sign in.