November 9 2019
2
India continues militarytechnical cooperation (MTC) with Russia, despite formidable shouts from the United States. On November 5-6, 2019, the head of the Ministry of Defense of India Rajnath Singh paid a visit to Moscow, where he met with Russian colleague Sergey Shoigu, Deputy Prime Minister for the defense industry complex Yuri Borisov, head of the Ministry of Industry and Trade Denis Manturov and took part in the meeting Russian-Indian intergovernmental commission on military-technical cooperation. 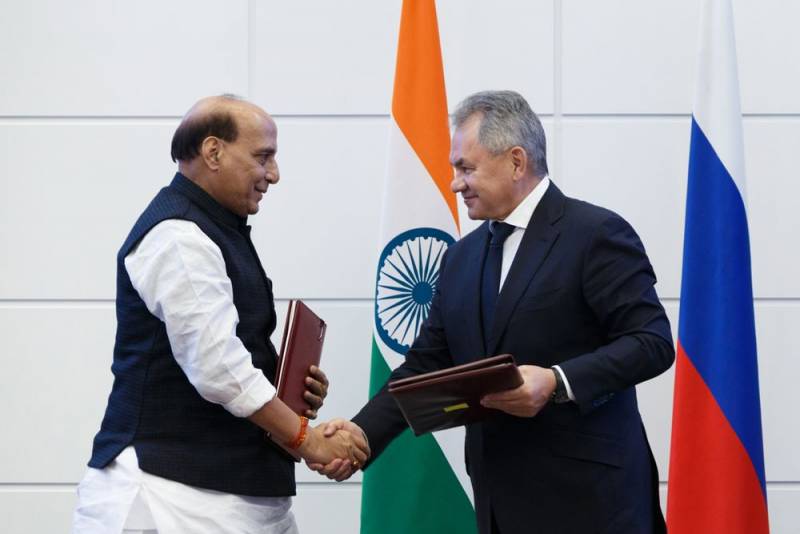 Singh said that New Delhi is committed to further developing relations and fruitful cooperation with Moscow on military-technical cooperation issues. Singh wishes to further strengthen ties between the defense enterprises of both countries. In turn, Shoigu said that India is one of the key partners of Russia in the military and military-technical spheres, and relations between the countries are strategic.

According to the Russian newspaper "Vedomosti"referring to a source close to the Russian Ministry of Defense, the visit of the Indian side was extremely important and useful for the Russian side. During the visit, the Indian side confirmed the invariability of the course towards cooperation with Moscow and made it clear that it was ready to develop relations, not paying attention to Washington’s position. This is of fundamental importance, as there were fears that India, under US pressure, could change course.

In confirmation of this, although with a delay due to certain objective reasons, India made an advance of $ 900 million for the first regiment kit of the S-400 Triumph anti-aircraft missile system (SAM). We remind you that according to the agreement concluded in 2018, India ordered five regiment sets of S-400 Triumph for a total of $ 5,4 billion. So now you can start to fulfill the signed agreement, once there is an advance.

In addition, it became known that India and Russia are negotiating the sale of 12-18 sets of Su-30MKI fighters and their further assembly at the factory of the leading Indian state aircraft manufacturer Hindustan Aeronautics Limited (HAL, Hindustan Aeronotics) in Nasik. Also, India and Russia are negotiating the assembly of 464 T-90MS tanks from the vehicle sets supplied by Uralvagonzavod at the facilities of the Indian state Heavy Vehicles Factory in Chennai. At the same time, two future contracts (12-15 Su-30MKIs and 464 T-90MS) are valued at almost $ 3 billion and are linked to India’s purchase of the S-400 Triumph.

It should be noted that in recent years, India does not like to buy fully finished products. Hindus seek to establish licensed production in their country so that the capacities of their own enterprises are loaded, and at the same time certain technologies are obtained. According to a Vedomosti source, the Russian side may go for a “deep transfer” of technology to India.
Ctrl Enter
Noticed oshЫbku Highlight text and press. Ctrl + Enter
We are
India talks about Pakistan strikes over the past 5 years
Goodwill gesture: Pakistan returns captive pilot to India
Reporterin Yandex News
Read Reporterin Google News
2 comments
Information
Dear reader, to leave comments on the publication, you must sign in.