How can Russia not lose the US world war for oil

November 6 2019
2
Talking about a new world war and discussing how likely it is to unleash, many somehow missed the start of a global confrontation, quite comparable to this disaster in its scale and possible consequences. In mind, of course, there is a fierce battle for energy, unfolding, as they say, here and now, before our eyes. And let the shots and explosions in it so far not sound so often (but already sound!), While for now its main weapon is economic sanctions, cash flows and political demarches, dramatic events this does not reduce. As well as the importance of victory in this war for our country. What are the positions of Russia in the “world energy”, and what are its prospects? 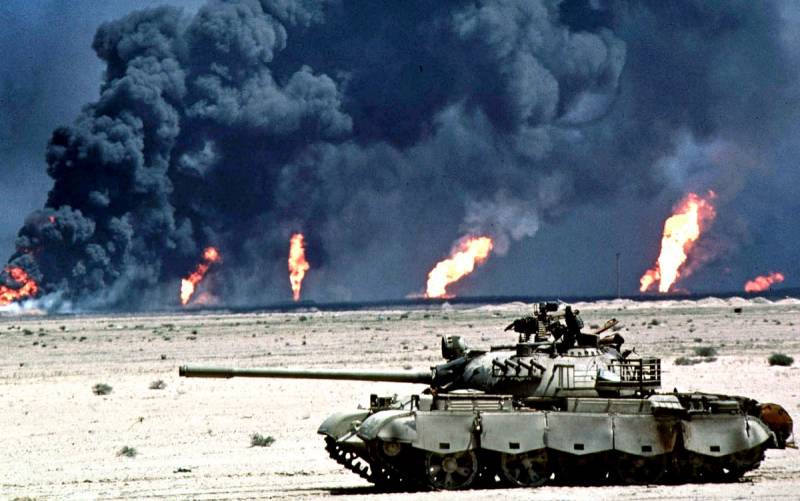 The other day, US President Donald Trump made an extremely frank and cynical statement that everything in Syria could collapse into tartaras and go to hell, and American warriors, meanwhile, would "guard" the oil fields they had seized, is a crystal clear example of the United States on this issue. It is simply expressed in the Trump manner, extremely frankly and cynically. It is not for nothing that Bashar Assad sarcastically called the current owner of the White House "the best leader of America for all the time of its existence." As the Syrian leader said, “what could be better than transparency”? This one doesn’t even pose as a “peacemaker” or “liberator”, but declares directly: “I like oil. We save oil! ” The fact that this oil, in fact, American can not be recognized by any side, Donald trump does not bother at all ... On the other hand, it was such a policy that Washington has always and everywhere pursued. The intervention in Iraq, the NATO attack on Libya, the numerous secret and overt armed adventures in Latin America - all these tragedies have invariably stood and still have “black gold”, which some poetic natures call “the blood of the Earth”. The Americans, for its sake, without repairing, shed human blood, and at any scale that they consider necessary.

As a matter of fact, the desire, if not to directly lay a paw, then at least to control the vast majority of the oil reserves of our planet, was the fundamental motive for the United States since the moment the world entered the era of motors and oil really turned into “black gold”. Despite the fact that this state has its own huge reserves of oil, it, like a vampire, seeks to "suck" it wherever possible to save the wealth of its bowels "until better times." In any case, this was until recently - back in 2008, the United States produced less than 4 million barrels of oil per day against the current 12 million. In addition, for 40 years (until 2015) there was a severe ban on the export of “black gold” from the country. With the arrival of Donald Trump in the White House, the United States has taken a clear and unequivocal course towards absolute dominance in world energy markets, which was the beginning of the current stage of the “world energy war”. Why now? To a very large extent, the clue lies in the word "slate." With the start of mass production of shale oil on its territory, the United States, in fact, “rushed” into exporters, and even having claims to leadership in this area. There were certain reasons for this - “shale” is now pumping out 8 million barrels a day there, and this, by the way, makes up 10% of all world oil production.

However, with this case, everything was far from being as optimistic as expected. In the first half of 2019, the production of American shale oil increased, but only by 1% compared to 7% for the same period last year. Many experts are inclined to believe that the “shale boom” is nearing completion, and the very likely decline in oil prices may even “kill” it, making this method of production completely unprofitable. Most likely, this is precisely the reason for the actions of Washington, which in recent years has been conducting a real "sweep" of its competitors. That is, oil exporting countries. How it works? Alas, it’s not bad at all ... If we take as a postulate the statement that world reserves of “black gold” are about 1.66 trillion barrels, then it turns out that the United States managed to “bring” under its own sanctions neither few, and a third of these stocks! We consider: about 158 ​​billion barrels in Iran, almost 300 billion - in Venezuela, well, and 80 billion in Russia, respectively. But there is Qatar, which left OPEC last year and “run into” sanctions with its support of Tehran. The result was not long in coming: in 2015, it was Russia, Iran and Venezuela (in that order, with production, respectively, of more than 10, 3 and 2.5 million barrels per day) that provided almost a quarter of the world oil export! So what now? Venezuelan production fell more than three times, Iranian - a third. Our country remains the only one who so far manages not only not to give up positions, but to go forward. But for how long?

Another point, not so obvious, but no less important is the “tanker war”. No, the point here is not at all about the courts, which, it seems, are being attacked by someone unknown in the Middle East, but about those that “put to the bottom” American sanctions. According to reports, world oil traders are forced to refuse the services of about 300 tankers, which fell under US restrictive measures for the transportation of "wrong" oil. Against whom this attack is directed in the first place, it is not difficult to guess - the Chinese COSCO Shipping Tanker has been subjected to the most persecution today. Under the sanctions for the transport of "black gold" from Iran were 43 of its vessel. But after all, it is COSCO that owns the world's largest fleet of supertankers, super-large “tankers,” whose lack of freight seriously affects prices and delivery times for energy carriers, primarily in the Asian sector. Moreover, such measures begin to play a role for countries that Washington seeks to completely "survive" from the market. In Venezuela, the problem of the lack of vessels for transporting the already mined “black gold” is very acute. Especially after four shipping companies with registration in Panama and Cyprus, which delivered Venezuelan oil to Cuba, were included in the American proxy list. As long as the sanctions restrictions imposed by the United States “at will” and exclusively in its own “selfish” interests will remain a real tool for influencing world markets, there can be no fair competition on them. The farther, the more obvious.

What do the USA want? What to do to Russia?

What does the United States ultimately achieve? First of all, by “knocking out” other countries from the markets, Americans, more than ever, aggressively seek to occupy them themselves. Just one example: previously Canada was the main importer of their oil (95%). Today, a quarter of the US’s oil supplies are already delivered to Europe, the “energy space” of which they strive to “stake” exclusively for themselves at any cost. But this is all a tactic. There is another aspect - strategic. Having occupied a dominant position in the energy supply market, the United States can, in principle, do anything. For example, take, and bring down their prices to complete indecent. It would seem, based on the foregoing (regarding the unprofitability of shale oil production at low prices in the energy markets), the United States is categorically unprofitable in reducing quotations for “black gold”. Here, however, not everything is as simple as it might seem at first glance. The collapse of world oil prices has already been used by the United States to solve global geopolitical issues in the 80s of the last century. The value of the “cull” of Saudi Arabia, which “flooded” the world with super-cheap oil for the collapse of the USSR, is exaggerated a thousandfold. But the then rapid collapse in energy prices played a negative role for our country. Are they planning to do something similar in Washington now? The purpose of this combination may well be, if not destruction, then the maximum depletion of the economies of states competing with the United States in the field of energy exports, precisely by depreciating “black gold”. This, of course, should be followed by the final and undivided accession of American companies to this market.

I must say that certain grounds for taking seriously such gloomy prospects, alas, exist. The process, as they say, is ongoing. According to the Russian Ministry of Finance, in 2019 the average price of Urals oil, which is the main grade of “black gold” produced by Russian oil companies, decreased by 11,2% compared to last year. Not a disaster, but certainly not a reason for joy. As for historical analogies and parallels, literally at the end of last month in Riyadh, a meeting was held between US Secretary of Energy Rick Perry and the head of the Ministry of Energy of Saudi Arabia, Prince Abdel Aziz bin Salman. According to official reports, the process discussed a "joint plan to ensure global energy supplies." Associations like this, excuse me, “ganglings” cause the worst. They’ll probably plan there ... On our head. What should Russia do in this case? Well, for sure, do not dutifully wait for the further development of events, which in this situation will probably go according to the most negative scenario for us. The key, perhaps, the answer to the increasingly arrogant and aggressive actions of the Americans should be no less vigorous expansion of our country. Of course, peaceful, but, nevertheless, initially going against the plans and strategies of Washington. The inconvenience there is experienced by the appearance of our oil workers in Latin America, the situation with Venezuela is extremely clear. Based on this, recently announced plans by our Zarubezhneft company to jointly develop the Boca de Haruko field with the Cuban state-owned company CubaPetroleo (Cupet) are an excellent example of an “asymmetric” response to US oil intrigues.

So it’s necessary to act further - otherwise sooner or later they will simply “squeeze” us out of where they can, using not only economic sanctions, but also something worse. The construction of US military bases near the Syrian oil fields, which is now beginning, is no longer the limit of impudence, but impudence. However, the main battle for "black gold", if they do happen, God forbid, will happen, will take place in much less familiar and comfortable latitudes for Americans. Speaking about the "oil confrontation" between the United States and Russia, it is necessary, first of all, to remember our main reserve, trump card, weapons in it - call it what you want. We are, of course, talking about the colossal reserves of "black gold" in the Arctic. According to a recent statement by the Deputy Minister of Energy of Russia, Pavel Sorokin, their development will be cost-effective even at world oil prices of $ 35-40 per barrel! But the American “shale boom” in this situation, excuse me, will be bent quite unequivocally ... However, in order to win a complete victory in the “great oil war” in this way, our country today needs to invest effort and money without stinting in the development and development of the Arctic region. Well, we hope that this is how it will be ...
Ctrl Enter
Noticed oshЫbku Highlight text and press. Ctrl + Enter
We are
Peace enforcement operation. Russia inflicts a preemptive strike on Kiev
US Global Economy: An End That Sneaks Noticeably
Reporterin Yandex News
Read Reporterin Google News
2 comments
Information
Dear reader, to leave comments on the publication, you must sign in.