November 3 2019
8
Recently we ReportedAs the former first and only president of the USSR, 88-year-old Mikhail Gorbachev admitted why they could not save the Soviet Union. And now, the famous 77-year-old politician Aslambek Aslakhanov, a former adviser to the President of Russia Vladimir Putin (2003-2008) on the issues of the North Caucasus, the major general of the police of the Ministry of Internal Affairs of the USSR, said that he and his generation were blaming themselves for the collapse of the Soviet Union. 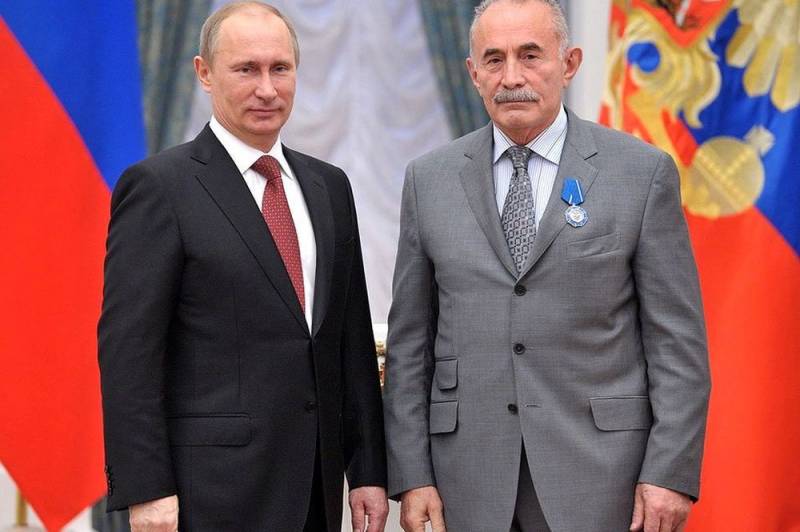 This (collapse of the USSR - ed.) Is a tragedy. I am a greater communist than anyone else. In the Soviet Union, if a person fell or froze, a crowd immediately gathered to help him. Have you seen this now? Step over people - and move on. Previously, if someone offended a woman, he immediately got a “pumpkin”, but now they pass by. The weak are beaten. In my life I once raised my voice to my mother. She was wrong, but I misbehaved. I apologized to her, but I can’t forgive myself. And such a country was destroyed by the Americans. About 80 people in the Kremlin sat for this
- Aslakhanov said during an interview with the publication Forpost (Sevastopol).

Aslakhanov noted that he did not support Dzhokhar Dudaev in 1992, when he advocated the secession of Chechnya, adding that the media at that time “duplicated the untruth”.

Dudaev was with me three times. Once I met him in Grozny. I told him: “You came to bring suffering to the Chechen people. Russia is bad now, but is a great power. She will crush you and me. ” So I told him. If the independence of Chechnya would benefit the Chechen people, I would be the first to do so. But I know that we only need to be with Russia. With Russia, we are power. Here is my position
- emphasized Aslakhanov.

Then there was a second meeting with Dudaev, I don’t remember what issue. And for the third meeting, he came to me at the White House. I accepted him, and he asked for help in getting him a visa to some Scandinavian country. I replied that these were not my questions. I did not satisfy him. But for all my negative attitude, Dudaev treated me very well. And then, after a while, they sent me the following message from him: “Tell Aslambek that I went very far”
- added Aslakhanov.

Aslakhanov touched on other topics. He was glad that Russia has the best special forces in the world, "the enemies are afraid of him." There are good anti-terror experts in Russia, “a lot of terrorist attacks have been warned.” At the same time, he is saddened by the fact that the Americans do not understand that friendship between Russia and the United States is beneficial to everyone. He called Putin a balanced person, "always finding the right words."

We remind you that Aslambek Akhmedovich Aslakhanov was born on March 11, 1942 in the Chechen-Ingush Autonomous Soviet Socialist Republic. In 1944, he was deported with his family to Kyrgyzstan, but graduated from high school in Grozny. He graduated from the law faculty of Kharkov State Pedagogical Institute and went to work in the internal affairs bodies (ATS). Then he graduated from the Academy of the Ministry of Internal Affairs of the USSR. In the early 90's, he quit the Ministry of Internal Affairs. Since 1992, he heads the All-Russian public organization "Association of Law Enforcement Agencies and Special Services of the Russian Federation." He was the chairman of the committee of the Supreme Council of the Russian Federation on law, law and order and the fight against crime (1990-1993), and a deputy of the State Duma of Russia (2000-2003).

Since 2011, is the head of the international association "Anti-Counterfeit". In the period from July 2008 to May 2012, he represented the Omsk Region in the Federation Council of Russia. He has written over a hundred scientific and journalistic works. He was awarded more than one hundred awards (state, departmental, regional and international). Master of sports in sambo, judo and freestyle wrestling. Has six children.
Ctrl Enter
Noticed oshЫbku Highlight text and press. Ctrl + Enter
We are
Gorbachev admitted why they could not save the Soviet Union
North Caucasus owes billions of rubles for housing and communal services
Reporterin Yandex News
Read Reporterin Google News
8 comments
Information
Dear reader, to leave comments on the publication, you must sign in.