Why Roscosmos "merges" the project of the Angara rocket

November 3 2019
32
Yesterday, the Angara rocket family was practically “our all” in an attempt to maintain Russia's position in space. And now the state-owned corporation Roscosmos is breaking a contract for its production with the Khrunichev Center. What is wrong with our “great white hope”? 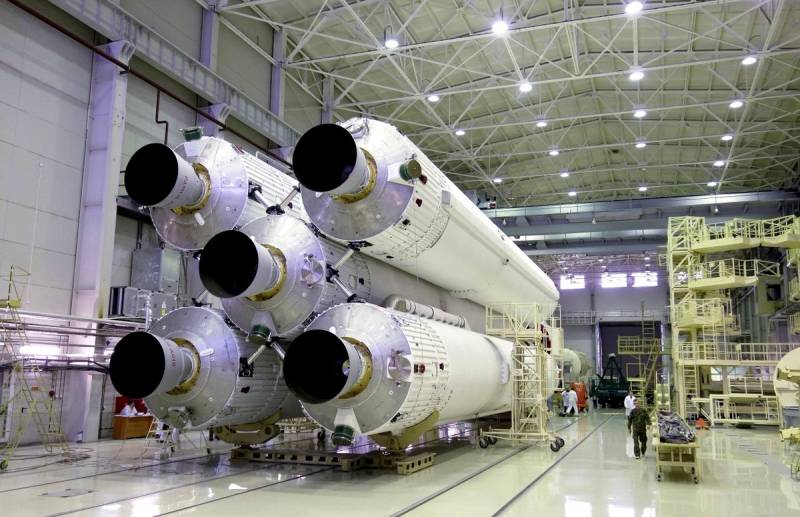 The Russian missile is a "long-term construction", which spent over 100 billion rubles, and is the subject of serious debate, having its supporters and opponents.

It should be understood that the booster was the brainchild of its time. Its concept was born in the early nineties, immediately after the collapse of the USSR. Baikonur suddenly found himself on the territory of another sovereign state, like many space industry enterprises. The young Russian Federation needed a rocket that was completely created and launched in our country.

During its design, very interesting solutions were applied. Instead of the poisonous heptyl Kazakhstan complained about, environmentally friendly kerosene was used as fuel. Engineers provided a modular design that makes the launch vehicle almost universal. Based on universal missile modules (URM), you can assemble a full line of carriers: from light to very heavy. Such an approach made it possible to put production on the conveyor belt and very seriously reduce the cost of the final cost of spacecraft.

As a result, Russia was to receive the ubiquitous Angara, covering all positions, including the Federation manned spacecraft, plus the old but reliable workhorse, Soyuz. Moreover, all launches should be carried out from the territory of our country, guaranteeing us a reliable gate to space. Beautiful, rational.

But why, after more than two decades, does the Russian Defense Ministry swear at the Angara, and Roskosmos is breaking the contract for its production?

Due to the lack of adequate funding in the nineties, the project turned out to be very time-consuming, realized largely on the enthusiasm of its developers. During the period when Angara could already fly and fly, numerous private space companies sprang up abroad, which began to intercept launch orders from Roskosmos. The Angara itself is good, but with all the budget billions invested in it, it flew only twice.

Twice! Astronautical experts explain that foreign customers are not ready to get in touch with a launch vehicle with such a touch to launch their expensive satellites. Within our country, the main client of the services of Roscosmos is the Ministry of Defense of the Russian Federation for putting the Gonets satellites into a low orbit. Those often burn out, so they need to be updated regularly. However, the power of the Angara for such launches is excessive, and the lighter Unions can cope with this.

The mess created in Roscosmos itself does not add optimism. Allegedly, to optimize production processes, the Angara was transported from Moscow to distant Omsk. But the effect was the opposite, the enterprise migrating to the periphery began to disrupt the deadlines for the delivery of finished products. Employees of the Omsk branch were even demonstrably deprived of bonuses. Instead of a heavy Angara, the launch of the Federation ship was handed over to the Soyuz-5 rocket, and they also forgot about the manned version of the Angara. Since 2014, all project implementation deadlines have been disrupted.

An expert in the field of astronautics Ivan Moiseev comments on the reasons for what is happening:

The last two years, the level of work of Roscosmos below the plinth. This is a complete lack of professionalism in organizing work.

Echoing him and Alexander Galkin, a columnist on space issues:

In recent years, four general directors of Roscosmos have been replaced. Each brings its own people, who must delve into the situation. There is simply not enough time. Plus - corruption. They steal like they do not steal anywhere. These are the words of the head of the Accounts Chamber, Alexei Kudrin.

So I want to sneak something about “effective top managers”, but not to laugh. The Angara project is being buried right before our eyes, despite the fact that the production of Proton missiles, which are being replaced by the Angara, has been suspended. Apparently, a good rocket interferes with a bad top manager, not otherwise ...

We are in Yandex Zen
It's important
20
Construction of the century: what happened to the production of the Angara launch vehicle
Russia decided to resurrect an obsolete rocket
Reporterin Yandex News
Read Reporterin Google News
32 comments
Information