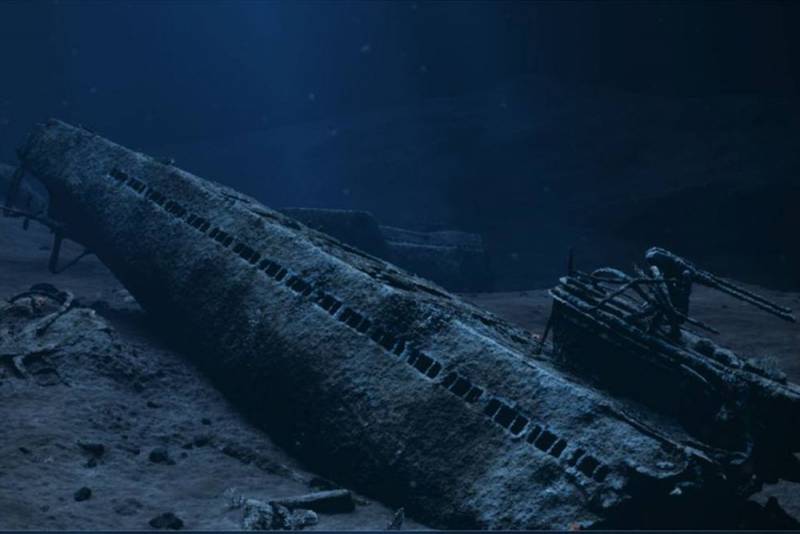 It should be noted that serious opposition from the “peace-loving” NATO bloc and its satellites to the establishment of relations between Moscow and Berlin has been going on for a decade. Therefore, the search for possible "surprises" from "well-wishers" by the Russian military sailors is a necessary and important matter. God save, as they say, saves.

In addition, during the course of the main work, sometimes real discoveries are made. As for the discovered submarine, then, according to experts, this is a German submarine from the Second World War, during which it was at the bottom.

As Vadim Malysh, co-chair of the Underwater Research Club of the World Ocean Museum, who had previously studied this area of ​​the sea, specified, he cannot say for sure whether this is the same object that was recorded earlier or a new one that has not been studied before. The thing is that visibility in the waters of the Baltic Sea, depending on the weather and time of year, is almost zero, and over the past centuries a lot of things have appeared at the bottom.

If you work sloppy flippers, then you raise a large cloud of turbidity, which then settles for a very long time. Accordingly, when working with a deep-sea apparatus, the screws that lift this turbidity from the bottom work very intensively
- explained the Kid.

In turn, Vice-Admiral Nikolai Khromov, chairman of the council of submarine veterans, is absolutely sure that the submarine discovered is not Soviet.

This boat is most similar to U-type submarines that took part in hostilities in the Baltic Sea during World War II.
- said Khromov.


It should be recalled that the city of Baltiysk (formerly Pillau) during the Third Reich was a training center for German submariners. So the submarine could sink in this area for completely different reasons, both as a result of a military conflict, and from the actions of its own crew. So, to find out the details, it will be necessary to carry out more than one dive or another underwater study.
Ctrl Enter
Noticed oshЫbku Highlight text and press. Ctrl + Enter
We are
Eyewitnesses to the death of submariners: "There was no smoke, nothing"
Russia is preparing for mine defense in the Sea of ​​Azov
Reporterin Yandex News
Read Reporterin Google News
Ad
We are open to cooperation with authors in the news and analytical departments. A prerequisite is the ability to quickly analyze the text and check the facts, to write concisely and interestingly on political and economic topics. We offer flexible working hours and regular payments. Please send your responses with examples of work to [email protected]
1 comment
Information
Dear reader, to leave comments on the publication, you must sign in.