What advantages will give Russia a combat icebreaker

October 31 2019
0
The Arctic, with its gigantic hydrocarbon reserves, is rapidly turning into an arena of confrontation between Russia and the collective West. The United States threatens to turn the Northern Sea Route into a common one, implying - into the American, and train its fleet to operate in the Far North. How will our country respond to the militarization of the Arctic zone? 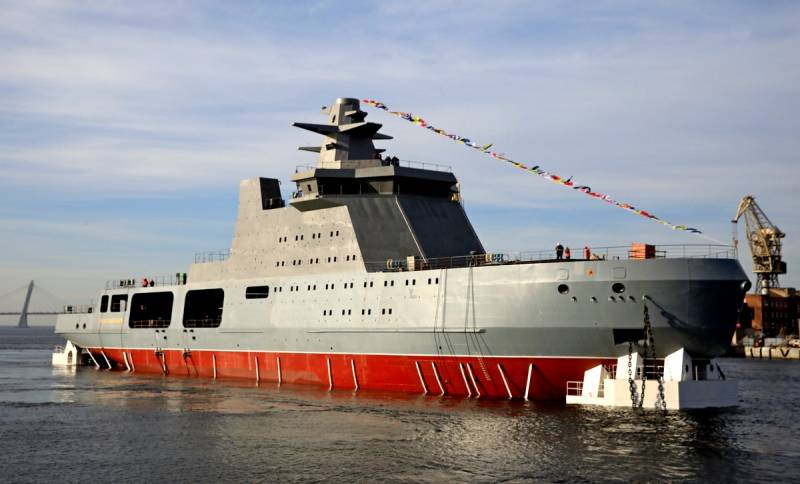 To date, the United States has only two icebreakers of not the first freshness, which the Pentagon can somehow count on when guiding its ships. If these old vessels break, and the Americans who have climbed into the Arctic will have to turn to the Russians for help, you won’t be ashamed. The United States ordered a series of new icebreakers, but this is not very fast, and they will wait many more years for reliable conductors in the ice.

Theoretically, some military assistance in the High North could be provided by Norway. Oslo has a patrol icebreaker, the Svalbard (KV Svalbard), armed with a 76 mm cannon and a multi-purpose helicopter. Earlier it was reported that Canada was going to build from the project of the Norwegian Svalbard from 6 to 8 such specialized ships, but so far this has not happened. Probably to be expected News on this subject, since Canada, feeling the support of the United States, declared its readiness, if necessary, to fight with Russia for its part of the Arctic.

So, there is a possibility of an armed conflict in the Arctic. What can our country answer?

First of all, it must be remembered that we have a good tradition of arming the icebreakers themselves. In the alarming thirties of the last century, during the development of Project 51 ships, they provided for the possibility of installing several 130 mm and 76 mm artillery mounts, as well as heavy machine guns. All ships of that series survived the Great Patriotic War, taking part in the hostilities.

This experience was taken into account when designing atomic icebreakers. For example, if necessary, “Lenin” could be equipped with quadruple 45 mm automatic guns, there were cellars for ammunition and other equipment. All armaments and ammunition for Soviet nuclear-powered ships were prudently stored in home ports. The icebreakers of the Arctic project can carry two twin AK-726 artillery mounts of 76 mm caliber and four six-barrel AK-630 assault rifles of 30 mm caliber.

Thus, our icebreaker fleet, the most powerful in the world, in which case was an impressive military force in the Arctic. Russia also has its own tradition of patrol icebreakers.

In 1957, the only one in series 52, the Purga ice-class border patrol ship, was launched. Over the years of service in the Far North, he detained 26 foreign ships that violated our borders. In the sixties, on the basis of the project 97 icebreakers, a series of 97P patrol patrol ships were created that could carry artillery weapons and a helicopter. Their goal was to oust American and Canadian icebreakers from the Soviet Arctic zone, where they "accidentally" found themselves. Finally, the first-class border patrol ship of the ice class “Polar Star” of project 1 “Ocean” is in operation, two more are under construction. They can be operated both in the Far North and in the tropics. Ships are equipped with artillery weapons, but can carry missile.

Of great interest was the information about the launching of the lead patrol ship 23550 “Arktika” for the needs of the Ministry of Defense of the Russian Federation under the name “Ivan Papanin”. In the series there will be only two, the second will bear the name "Nikolai Zubov". By their size, the ships belong to the class of destroyers, and are adapted to serve both in arctic and tropical conditions. On the move, they are able to break the ice 1 meter thick, but the obstruction 1,7 meter thick will obey the ships.

The armament consists of 76-mm bow guns AK-176MA, as well as a Ka-27 helicopter. They also carry two Raptor speed boats and an air cushion boat. It is possible to install eight Caliber cruise missiles. Let's face it, AUG Navy, these ships will not stop. And it’s hard to imagine that the carrier group of the US Navy was beyond the Arctic Circle.

In fact, we have before us multi-purpose modern ships. Their task is to patrol the Northern Sea Route, the importance of which is growing day by day. If necessary, “Papanin” and “Teeth” will be able to stop the intruder and take him in tow. They will also help ships in distress. Thanks to specialized equipment, our two ships will be able to perform the functions of watchdogs, watching over the Arctic waters.

In other words, we have before us the future “traffic controllers” on the Northern Sea Route, who are monitoring order and promptly providing assistance in difficult climatic conditions. Unfortunately, due to funding problems, the deadlines for putting the Papanin and the Zubov bookmarks are shifting all the time, which is what the competent authorities should pay close attention to.
Ctrl Enter
Noticed oshЫbku Highlight text and press. Ctrl + Enter
We are
US vs. Russia: clash in the Arctic becomes inevitable
Is the US ready to lose its fleet in the Arctic?
Reporterin Yandex News
Read Reporterin Google News
Information
Dear reader, to leave comments on the publication, you must sign in.