October 22 2019
15
Against the background of the terrible events in Syria, the continuation political intrigues in the United States and phenomenal freaks of Ukraine in Minsk over the "Steinmeier formula", a completely different event, also held in the capital of Belarus and having even more relation to Russia than the sluggish negotiations on Donbass - as long as they were useless, remained practically unnoticed. 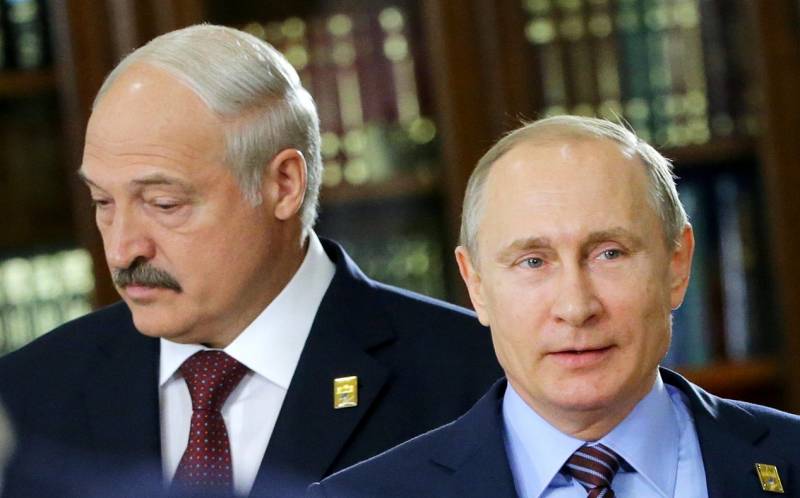 We are talking about a very representative international conference held there, which, pursuant to its name, pursued exceptionally good goals, but, in fact, turned into another “Russophobia festival”. And the performance of the Belarusian leader on it makes you think hard - but did Alexander Grigoryevich finally get lost in his endless hesitation: where to pave the way for his country? Either to the East, or to the West? His other numerous actions also lead to similar doubts.

From the edge of the abyss or away from Russia?

The conference, which I mentioned above, had a high-profile title: "European Security: move away from the edge of the abyss." It took place as part of the second Minsk Dialogue forum. Who took part in this communication? Our country was represented there in the person of Senator Alexander Pushkov and member of the Russian State Duma Vyacheslav Nikonov. But the rest are “distinguished guests” ... The company, as they say, is like a match: Alexander Vershbow, former deputy secretary general of NATO, Catherine Ashton, who once headed European diplomacy. And to the heap - Ben Hodges, who not so long ago commanded a contingent of US forces in Europe. As they say, Russophobe sits on Russophobe and drives Russophobe. Incidentally, the former Georgian president Georgy Margvelashvili also noted there, whose speech was remembered by the calls to the "international community" to quickly find "solutions to the problems of Georgia and Ukraine", it is clear who created it. However, the matches of the other participants in the summit were about the same. What did the same Hodges cost, starting from a high rostrum to broadcast that "the very idea of ​​the Union State" would certainly come out of Belarus sideways. She, they say there, "does not expect anything good." A good goose ... in the sense - a guest who teaches in such a cheeky manner of the hosts! Or do the American general and his associates in the anti-Russian camp already consider themselves masters in Minsk? It is impossible not to notice that there are certain reasons for this.

The main thesis of Lukashenka’s speech to the audience was the same idea that his country should become a kind of “bridge”, “connecting link” and “center of dialogue” between East and West, Russia and NATO, and so on. Apparently, Alexander Grigorievich really liked the role of a mediator, a kind of arbiter, standing “above the fight” and ... reaping rather weak dividends from this fight. Perhaps the most striking moment in his speech was the loud statement that the war in the Donbass is nothing more than a "Russian-Ukrainian conflict." “And do not la la that this is not true! Here serious people are sitting in the hall! ” - Something like that was said. Well done, Alexander Grigoryevich, sit down, standings! The lesson of the West as to how to "correctly interpret" the sixth year civil war in Ukraine, was learned by you "perfectly" ... And the words said on this occasion by Dmitry Peskov, who had overtaken the president who was too carried away, were heard later and not in the conference hall. By the way, the speeches of our parliamentarians, who tried to call on the West for a dialogue that should be “equal,” taking place there, also turned out to be nothing more than the next voice crying in the desert. Another small betrayal happened. However, is it so small?

Generally speaking, when you get acquainted with Lukashenko’s quotes about relations with both Europe and Russia, you start to wonder: does one person say all this ?! These statements are too opposite, sometimes mutually exclusive. Here, for example, speaking at the Belarusian Academy of Management, the leader of the state talks that he and the Belarusian government never had any intention to join the European Union! But at the same time, he immediately makes a phantasmagoric statement: it turns out that such a request, in his opinion, “was formed in the EU itself”! And what do you think, the European Union, today become Belarus a member of it, "in general, I would have no problems with it." Further more. Alexander G. begins to disclose state secrets to the audience. The president, according to him, had a chance (somehow two years ago) to read the "closed report obtained by intelligence" prepared already in Brussels itself! So: they call it bluntly the country he leads is “the most advanced in Eastern Europe”, outside the EU, of course. And, moreover - ready to join the "big European family" even tomorrow. Moreover, "without any changes in the law or anything else ..." Here's how to order it to understand? Fancy? Coquetry? Or another demarche towards Moscow:

Look how wonderful we are! Yes, Europe is ready to tear us off with our hands!

But Lukashenko is meeting with Andrei Nikitin, governor of the Novgorod region, and we hear from him completely different. Europe? What are you !? They will never let us go there! According to Alexander Grigoryevich, Belarusian goods are "better than European in almost all respects (and they recognize this there), but they are not allowed to enter the market." European pressures ... By ritually cursing the “rotten West” in this way, the president immediately assumes that “Belarus will not turn its back on Russia in life.”

This has never been and never will be!
He exclaims earnestly.

Freshly legend ... In fact, we have Russophobic games in which the leader of the state actively participates. And it's not just about the Minsk Dialogue. Lukashenko’s meeting with Federica Mogherini, as well as the foreign ministers of Poland and Lithuania, which was supposed to take place as part of the again, strictly anti-Russian initiative “Eastern Partnership”, was frustrated solely because of the sudden refusal of the “best friends of Russia” listed above to enter Belarus. But it was planned to sign agreements that were extremely enthralling for Belarus tearing into Europe. Something was said there about a simplified visa regime, readmission and the like ... Yes, it did not grow together. The harsh Europe continues to periodically weighe Minsk “clicks on the nose”, and, moreover, is very painful. As soon as the Belarusian Foreign Minister Vladimir Makei arrived in Berlin to report on a “warm and friendly meeting” with his German counterpart, offensive reproaches against the Belarusian authorities “lacking” regarding “pluralism and legality” appear on the German Foreign Ministry website. And, in addition, instructions on how to hold the expected parliamentary elections in November in the country. No, what a passage!

EAEU is no longer at court

However, Alexander Grigorievich is not discouraged. Not trusting in his own officials, the president intends in the very near future, thus interrupting the long-lasting “retreat”, to pay a visit to European capitals (at least to Vienna), personally. Well, of course, you won’t do it yourself, no one will. Old Man Lukashenko recently "cuts through the window to Europe" with zeal that can shame Peter the Great. Alas, with the same tenacity he “cuts” ties with those who, until recently, continued to consider Belarus a reliable ally and strategic partner. Having sharply activated several years ago the processes of the country's accession to the WTO (such is expected as early as next year), Alexander Grigoryevich more and more sharply began to come down with criticism of the Eurasian economic union. He tirelessly repeats about some “problems and barriers”, about “torpedoing supplies of Belarusian goods” and the like. Moreover, the Belarusian president has openly called Russia "a brake", which, it turns out, "impedes the free movement of capital, labor and goods within the EAEU." It sounds just great! Especially taking into account the fact that it is precisely Minsk, within the framework of this organization, that most often tries to tightly close its own market from “foreign” goods, or, for example, blocks the access of companies from its member countries to public procurement conducted in the country. Obviously, the Belarusian leader has very specific ideas regarding the “common market”. Somewhere on the level: "everything is ours, but nothing is from us."

The endless wailing about “Moscow discrimination of Belarusian products”, “unfair tax maneuver” and other things that make up the “gentleman's set” of Minsk’s frankly pretentious claims against our country have already turned into a kind of mantra, repeated with or without reason. At the same time, the Belarusian side continues to do some things that are frankly annoying the Russian leadership, as if nothing had happened. For example, information in the Ukrainian media is intensely circulating that the meeting of Alexander Lukashenko and Vladimir Zelensky, as well as business representatives of both countries, held on October 4 in Zhytomyr, "ended with the signing of contracts worth half a billion dollars." But it’s interesting how much of these gesheft will comprise oil products produced from Russian raw materials obtained at more than favorable rates? This fact is especially touching against the background of the statements of Alexander Grigoryevich himself about the “Russian-Ukrainian conflict” in the Donbass. You know, there aren’t even words here ... It looks like they aren’t in the Kremlin either. And so there they decided to move on to business. Very, it should be noted, unpleasant for Minsk. So, just a couple of days ago, an extremely significant statement was made by the First Deputy Prime Minister of Finance of Russia Anton Siluanov regarding the fact that a loan of $ 600 million, which, incidentally, is necessary for Belarus to refinance its own debts, may well not be seen there .

There may not be a solution
- said Siluanov. And he directly linked the will of Moscow with "progress on the integration track." Perhaps it’s already impossible to hint more transparently ...

So far, the issue of integration has not been removed from the agenda. Russia and Belarus are friends and allies. Joint military exercises of our countries have been following recently, practically, one after another. Well, it’s quite reasonable, especially considering the fact that just now the next US Army armored battalion is deploying battle formations in Lithuania. Even with this, everything is in order with us. Well, almost okay, if you recall Lukashenko’s remarks about the “uselessness” of a Russian military base for Belarus ... Anyway, it’s time for Alexander Grigoryevich to stop “walking in circles” between the West and the East, between Russia and Europe. And you can really get lost, and so much so that you won’t get out later.
Ctrl Enter
Noticed oshЫbku Highlight text and press. Ctrl + Enter
We are
How Ukraine break Putin's plan: six tips Zelensky
Lukashenko is ready to give up. Just have not decided yet - to whom
Reporterin Yandex News
Read Reporterin Google News
Ad
The publication is looking for authors in the news and analytical departments. Requirements for applicants: literacy, responsibility, efficiency, inexhaustible creative energy, experience in copywriting or journalism, the ability to quickly analyze text and check facts, write concisely and interestingly on political and economic topics. The work is paid. Contact: [email protected]
15 comments
Information
Dear reader, to leave comments on the publication, you must to register.
I have an account? Sign in