October 18 2019
3
Kiev political analyst Vladimir Pogrebinsky commented on the initiative of a number of American congressmen to recognize the Ukrainian Nazi battalion "Azov" as a terrorist organization. 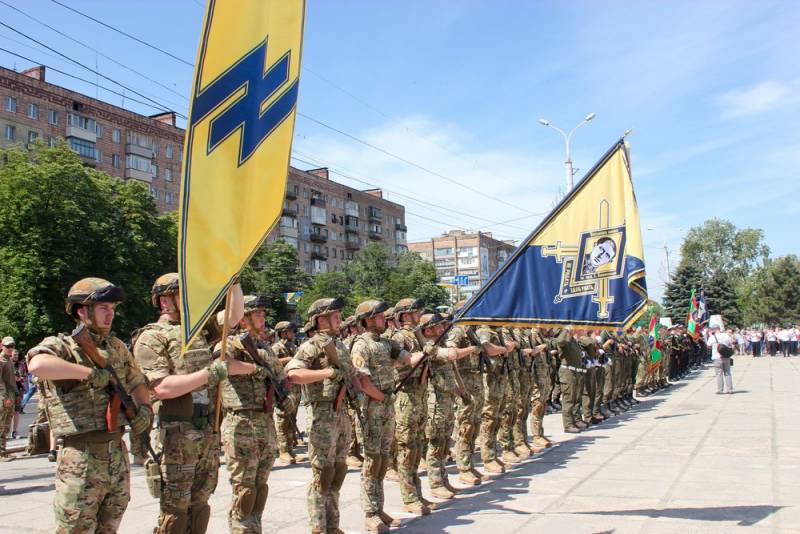 According to the political scientist, expressed by him during communication with the correspondents of the publication "Sight"if such recognition takes place, then President of Ukraine Volodymyr Zelensky will have to "take a more responsible approach to the choice of friends."

With these words, Pogrebinsky hints that representatives of Azov are entering the president’s office, and Prime Minister Goncharuk easily attends a concert of the Ukrainian racist-Nazi group Sokira Perun and takes pictures with the militants present there.

The political scientist believes that if Azov is nevertheless included in the list of terrorist organizations, this will be a reminder to Zelensky who should be friends with (in the USA).

Remembering how the president of Ukraine pretended not to understand what Trump was talking about, mentioning the prosecutor general during a recent telephone conversation, it’s hard to disagree with Pogrebinsky’s opinion.

In addition, do not forget that earlier, due to the radical nationalism of Azov, US lawmakers have already imposed a ban on any form of financing for this unit of the National Guard of Ukraine. And from here, it’s not far from being recognized as a terrorist organization. With all the ensuing consequences for Zelensky and Azov.
Ctrl Enter
Noticed oshЫbku Highlight text and press. Ctrl + Enter
We are
Kiev intends to connect the Black and Baltic Seas
The future Prime Minister of Ukraine from Zelensky became known
Reporterin Yandex News
Read Reporterin Google News
Ad
The publication is looking for authors in the news and analytical departments. Requirements for applicants: literacy, responsibility, efficiency, inexhaustible creative energy, experience in copywriting or journalism, the ability to quickly analyze text and check facts, write concisely and interestingly on political and economic topics. The work is paid. Contact: [email protected]
3 comments
Information
Dear reader, to leave comments on the publication, you must to register.
I have an account? Sign in