Japan's growing appetites: Russia will not get off alone with the Kuril Islands

October 17 2019
11
Another "friendly greetings" flew to Russia from distant Japan. The popular Sankei Shimbun publication there, close to the ruling party to which Prime Minister Shinzo Abe belongs, actually accused the USSR of a "treacherous attack" on Japan and the commission of a "state crime." 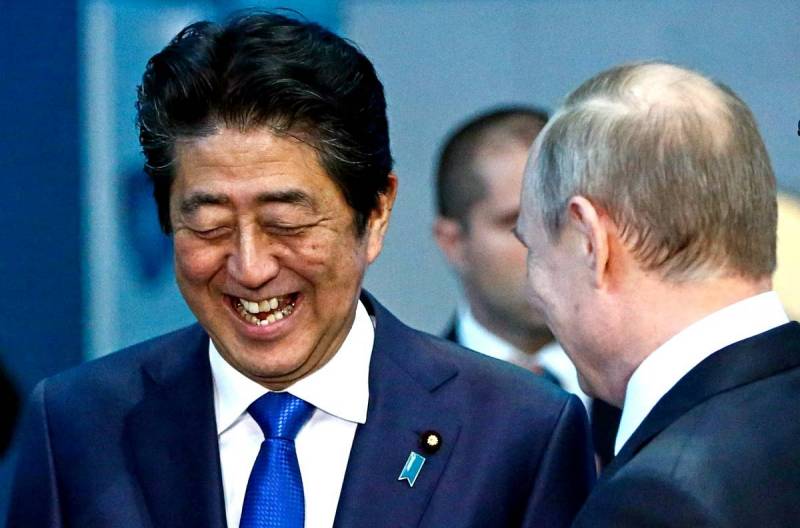 At the same time, the author of the publication, Japanese journalist Ryosuke Endo, rebuked the Russian president:

Russian President Vladimir Putin ... insists on the justice of the outbreak of hostilities against Japan. You cannot say from him that he is serious about solving the problem of the "northern territories".

They do not say that Japan was an ally of Nazi Germany and carried out aggressive predatory activities. They don’t talk about the Nanking massacre when Japanese soldiers killed at least 300 thousand Chinese. In their reality, two American atomic bombs that fell on Hiroshima and Nagasaki saved the millions who were supposed to die when landing on an island state. And if so, the atomic bombardment of two peaceful cities by the United States was a boon to Japan, because afterwards it brought peace and democratic values.

Instead, the USSR was appointed the main villain, and, it turns out, the Russian Federation as its successor. How did that happen? In modern Japanese mythology, the following is considered dogma:

The Soviet Union violated the Neutrality Pact, illegally occupied the South Kuril Islands, which belonged to Japan, and that the internment of thousands of Japanese troops was illegal.

So, Tokyo is sincerely convinced of the treachery of Stalin, who violated the non-aggression pact. But in reality, everything was a little different.

Diplomatic relations between the USSR and Japan were established only in 1925. Recall, shortly before that, during the Civil War, vast territories in the Russian Far East were occupied and plundered by these very Japanese. From 1926 to 1936, Moscow repeatedly proposed Tokyo to sign a non-aggression pact, but was refused. Against the background of the fact that in 1931-1932 the Japanese military captured and occupied Manchuria, approaching the Soviet borders, it looked quite promising. In 1937, Tokyo's appetites spread throughout China.

At the same time, Japan frankly conducted policies anti-Soviet orientation. In 1936, the Anti-Comintern Pact was signed, marking the beginning of an alliance with Nazi Germany. And in 1940, Tokyo concluded the Triple Pact with Berlin and Rome, dividing Europe and Asia among themselves. In 1938 and 1939 there were direct military clashes with the Japanese at Hassan and Halkin-Gol. The Kremlin’s great tactical success was the signing of a non-aggression pact with Germany in 1939. The change of the Japanese government led to a reorientation of the idea of ​​external expansion into the Asia-Pacific region, where a further clash with the United States took place.

The Neutrality Pact between Japan and the USSR was signed on April 13, 1941 for a period of five years. However, Tokyo continued to consider military plans against the Red Army, codenamed "Kantokuen" with the help of the Kwantung Army, which consisted of 1 million soldiers, 1,2 thousand tanks, 1,9 thousand aircraft and 6,6 thousand guns. The defeat of Nazi Germany in May 1945 did not mean the automatic defeat of Japan. Losses at a possible landing on the Japanese islands were estimated at one million people.

On April 5, 1945, the USSR, in agreement with the allies of the anti-Hitler coalition, decided to denounce the neutrality pact with Japan. As a justification, it was rightly pointed out that Germany, an ally of Japan, treacherously attacked the USSR on June 22, 1941. At the same time, Tokyo is at war with London and Washington, which, like Moscow, are members of the anti-Hitler coalition. After this, a brilliant rout of the Kwantung Army followed, and the USSR received the Kuril Islands as a military prize.

Here, in fact, the whole story is “dotted”. But now in Tokyo, for some reason, they consider the denunciation of the pact "treachery." In principle, it is clear why. If the attack was “criminal”, then the transfer of the Kuril Islands to the USSR was “criminally illegal”.

It is noteworthy that the Sankei Shimbun publication actually raised the stakes, pointing not only to the “capture of the Kuril Islands”, but also to the fate of the Japanese troops of the defeated Kwantung Army. After the normalization of relations, out of more than a million prisoners, about 730 thousand people returned home. It must be assumed that in the event of a positive settlement of the status of the "northern territories" for Tokyo, the question will be raised about compensating the families of the "samurai innocently affected by Russian aggression"? Appetite is known to come with eating.