Turkey's future: withdrawal from NATO, accession to the CSTO and EEC?

October 16 2019
12
Operation Source of Peace, launched by Ankara in Syria, will cost Turkey itself. More importantly, it could be the impetus for restructuring the militarypolitical и economic maps of Europe and Eurasia in general. 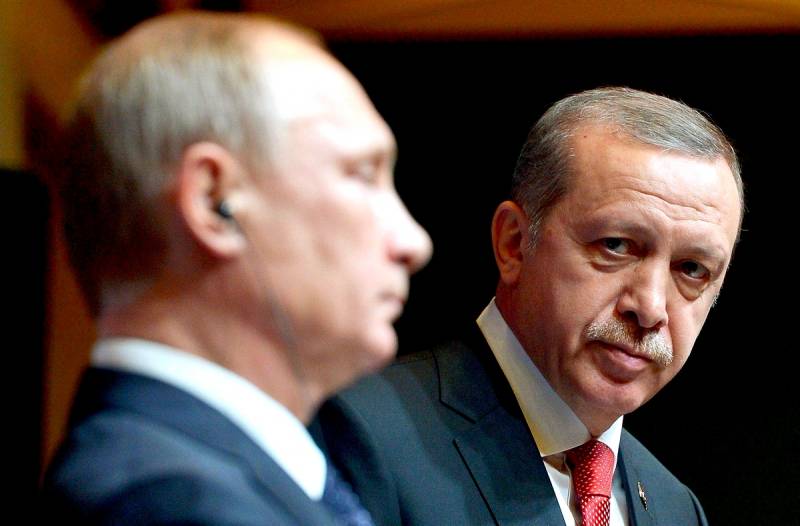 As you know, Turkey is the most important member of NATO, the anti-Russian military bloc. The Turkish army is the second strongest in the alliance after the American one; the Turkish fleet closes the straits, preventing the Russian Black Sea Fleet from entering the Mediterranean Sea. At the military base, Incirlik Pentagon keeps stockpiles of tactical nuclear weapons closer to its potential adversary.

And now everything can change. Washington is busy discussing the possibility of exporting a nuclear arsenal from Turkey. As an alternative to host an American military base, Greece and Cyprus are called unfriendly Ankara. The European Union condemned Operation Source of Peace in Syria. Its members agreed to stop the supply of arms to Turkey.

Yesterday's allies are beating on the Turkish economy. President Trump has stopped negotiations with Ankara on a multibillion-dollar bargain, imposed increased duties on its metallurgy products. Washington applied personal sanctions against key members of the Turkish government. The already depreciating 30% of the Turkish national currency continued its further decline.

The following questions suggest themselves. How far can all this go? Is it likely that Ankara, having quarreled with the USA and Europe, would leave NATO? And if so, what are the chances that Turkey will turn away from West to East, turning its eyes to the EAC and Eurasian NATO, the CSTO?

First of all, we need to figure out what the North Atlantic Alliance actually is today. During the Cold War, NATO was a consolidated capitalist counterweight to the socialist camp. The contradictions between its members faded before the need to confront the "communist threat." But everything changed in 1991, when the USSR died, and its former members themselves embarked on the capitalist path of development.

The existential external threat has disappeared, and with it the root cause for uniting the traditional competitors of the Western world. The NATO bloc remained as a tool for US control over Europe. And the role of Turkey here looks special. There were reasons for her joining the alliance.

At first, The USSR expressed certain territorial claims against Turkey, which grew land in the Caucasus at our expense in 1921.

Second, the in Turkish society, leftist moods were very strong, especially among the intelligentsia.

It is not surprising that Ankara rushed for support against the USSR to the West. The Turks even had to send their troops to help the Americans in Korea to demonstrate their loyalty. In gratitude, Washington supported the formation of the Turkish armed forces, opened military bases and radio intelligence stations on its territory.

However, serious contradictions began to accumulate in relations between Ankara and the West. So, the tension inside the NATO bloc created the entry of Greece into it. With the disappearance of the USSR, not only the external threat disappeared, but also the need to portray friendship with a historical adversary. The mood also changed in Turkish society itself, which perceives the alliance as a Western project, despite the fact that the Republic is part of the Middle East. The fact that Turkey was never allowed into the European Union, humiliatingly keeping it on the threshold for decades, did not add to its popularity. Finally, Ankara really did not like what the Americans called their Kurds, who are considered the main threat to the territorial integrity of Turkey, as their allies in Syria.

It turns out that there are prerequisites for Turkey’s secession from NATO. True, the situation has not yet matured. The US and the EU would rather be interested not in excluding the most important member of the alliance, but in changing their leadership to a more obedient one. And they hardly understand this in Ankara itself.

It’s very convenient for President Erdogan that he has a certain space for maneuver between the West and the East. He can replace the NATO-style weapons with Russian ones. If necessary, an alternative to the North Atlantic Alliance can be the “Eurasian NATO”, the CSTO. Integration with the Eurasian Economic Union is possible, as well as deepening cooperation with China.

Why not? Judging by the events in the same Syria, the Kurds abandoned by the Americans turned to Damascus and Moscow for help. Offended by the collective West, the Turks may also turn to face the collective East. In the "era of trump" everything is possible.