October 5 2019
3
The story of the “fighting” humanoid robot has come to an end: but will it stop other engineers? Perhaps the result obtained during the battle of robots will form the basis of other, more successful developments. 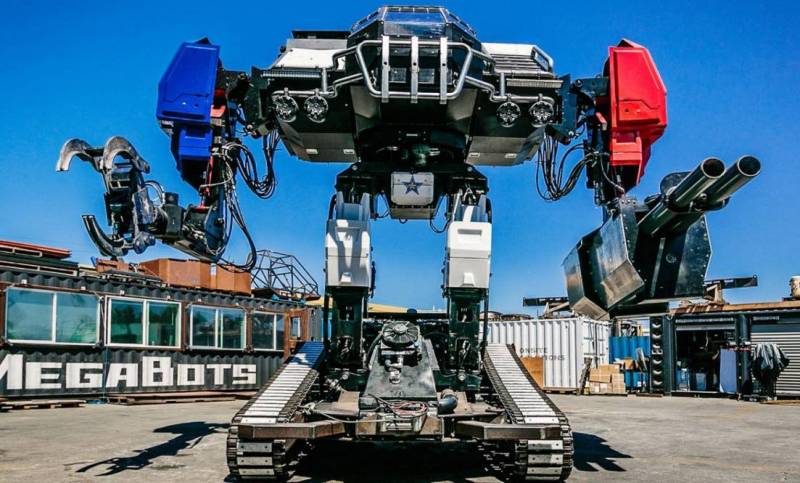 September 24 this year, TechCrunch shared a sad news for fans of robots and science fiction: the project of the giant humanoid robot MegaBot is closed, and will not be returned to it. Its developer, MegaBots, announced bankruptcy and the need to pay off accumulated debts as quickly as possible. “This is the end of MegaBots in its current form,” the company said. 15-ton robot Eagle Prime put up by eBay: bets started from one dollar, but soon the price rose to 50 thousand, and soon this mark was left far behind.

For a tidy sum, everyone can get not just a pile of scrap metal, but a fully functioning, albeit generally unnecessary device. “The robot is functional, it is simply being auctioned off because the company went bankrupt,” MegaBots says. As the developers themselves admit, the crawler robot can normally move only on a hard surface and can hardly cope with soft soil. He has difficulties with maneuvering, which is caused, inter alia, by large dimensions. And yet, from one wrong movement, a large structure can fail - we will talk about this later.

According to TechCrunch, about $ 2,5 million was spent on creating the robot: most of the funds were raised using crowdfunding.

So what happened to the once bright team of talented engineers? To begin with, the inventors were able to attract the attention of the public with bold statements and vivid concepts: recall that the appearance of the robot has undergone changes. And more than once. In the end, a twelve-tone version appeared - MegaBot Mk.III Eagle Prime: they tried to make it as formidable as possible.

This, of course, is just a shell. We must not forget that this is not a combat vehicle at all, but simply expensive entertainment, and the robot never thought of as a fighting vehicle.

“Megabot” would have been forgotten much earlier if it had not been for the original “knight move” by the developers. Earlier, Japanese engineers from Suidobashi Heavy Industry created the Kuratas robot. Without thinking twice, the Americans challenged him to a duel. It is noteworthy that some media presented Kuratas as a “combat complex”: it’s true that the wheeled Japanese was more like a real combat vehicle, but it was also just a tricky (or not very tricky) trick. For both teams, the weapon was a simple sham. 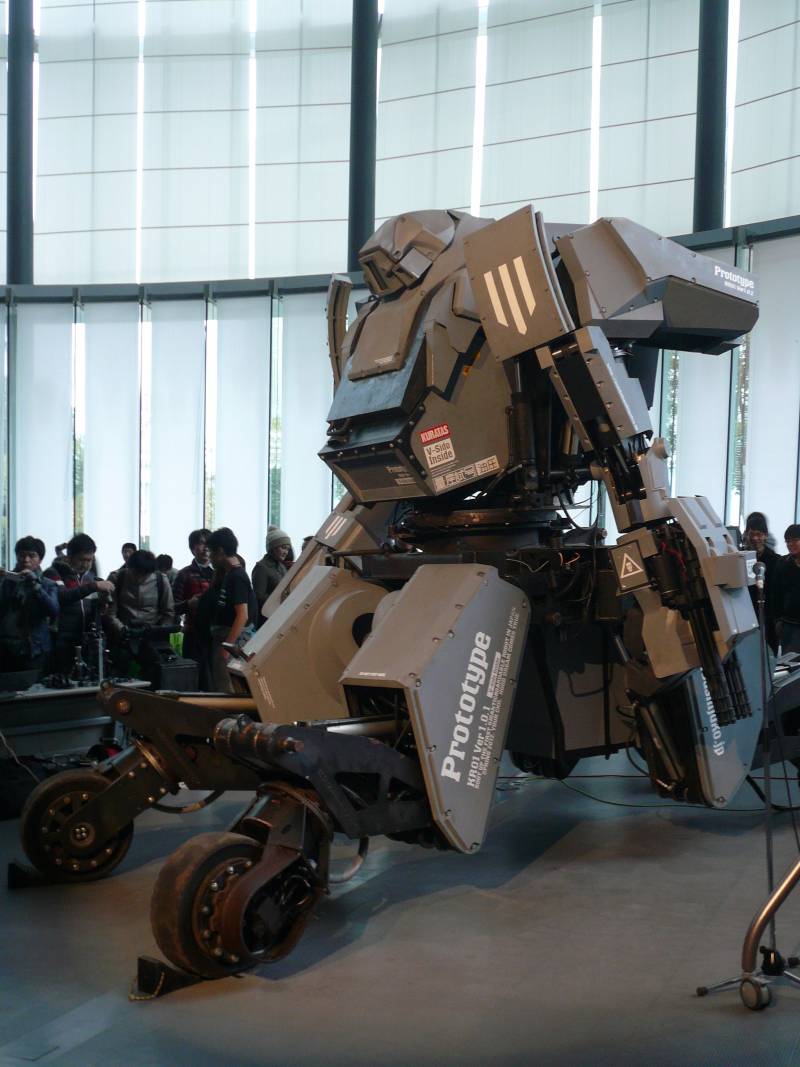 The first Kuratas weighed about four tons, and the diesel engine allowed it to reach a speed of about ten kilometers per hour. Both MegaBot and Kuratas are controlled by the inside person.

The fight, which was not

The Japanese agreed to the proposal. The fight took place in Japan and consisted of several parts. The victory was awarded to the team that would disable the enemy robot. The first round was left to the team of the Land of the Rising Sun: Kuratas simply “rode” into MegaBot with his huge hand, knocking over the American miracle of engineering. In the next round, fortune was on the side of the United States. After a long and positional shootout with balls, the new MegaBot Mk.III (in the first round there was an old version of the robot) “knocked out” the Japanese car with punches. Finally, in the third round, the Americans armed their robot with a saw, and he pretty much chopped up the unfortunate Kuratas under the not very convincing experiences of the presenter.


The result is a US victory. However, both Western and Russian-speaking observers wrote that the word "victory" is hardly appropriate here. The Japanese robot was much smaller, and the sympathy of a multimillion-dollar Western audience was understandable on the side of whom (and the organizers of the show, of course, knew about it). 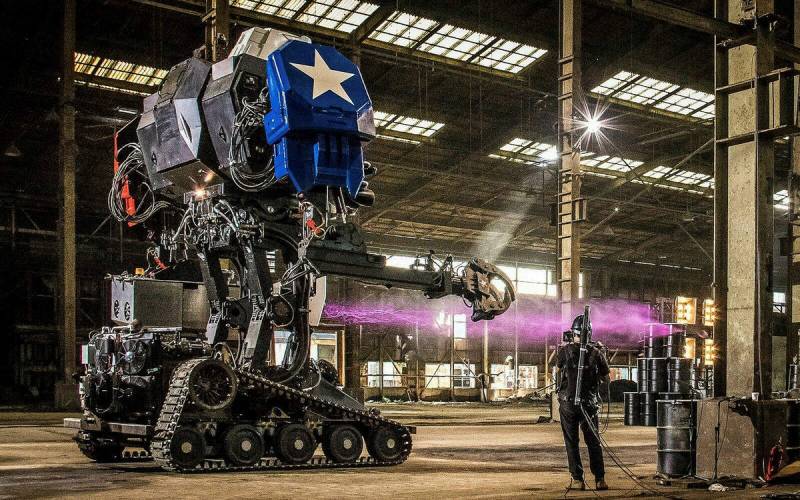 However, frankly, it is unlikely that any of these people will ever see the battle of MegaBot and Kuratas. She was very long and boring: robots moved extremely slowly and were very slow. The fact that there is a living person inside everyone forced the teams to think about every step so as not to harm the pilot’s health: both someone else’s and his own.

In general, such a show has no prospects - it became clear in the first round. The fights of small remotely controlled robots that have their own audience, in particular in the UK and the USA, where they had previously begun to hold such fights, look much more attractive. Perhaps in the future, the format of the competition will be affected by artificial intelligence, in particular, neural networks. But this will give rise to uncomfortable questions of a moral and ethical nature: for example, is it possible to trust AI weapons, albeit conditionally sports ones. And whether it will turn back then against the people.

In real life, a fighting humanoid robot never appeared, and it is not a fact that it will one day appear. Despite the military’s interest in exoskeletons, a large walker (such devices are also called “bellows”) is simply not needed. It is too expensive, technically sophisticated and vulnerable due to its high silhouette. Almost all of the tasks that must be performed by the BChR can be performed by the main battle tank, infantry fighting vehicle, or armored personnel carrier.

Relatively small (the size of a dog) walkers from Boston Dynamics have some chances for active use. They were offered to be used as a means of delivery of goods and ammunition, but, as tests have shown, the device is too loud, complex and expensive. So, the American Marines refused him. Perhaps the robot will be able to realize itself in the civilian field, but so far, despite all the progress made by Boston Dynamics, their robots are still not too practical. 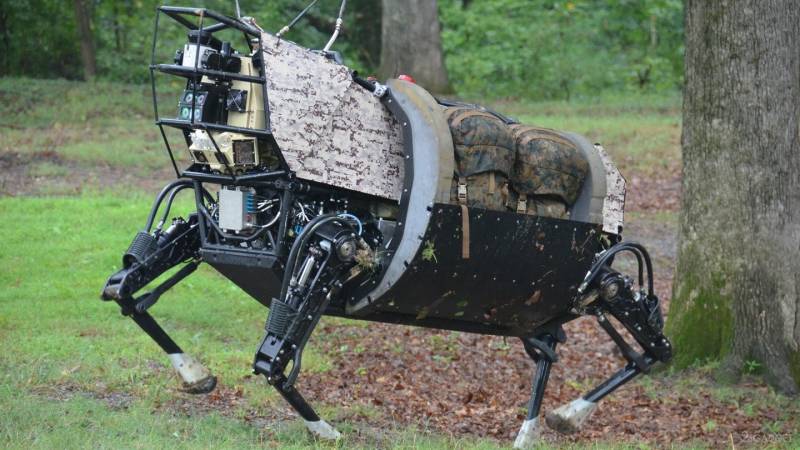 Interestingly, Russia came closest to creating a real large ground combat robot. Previously, the crawler robotic complex "Uranus-9" was even able to fight a little in Syria. Having shown, however, an insufficiently satisfactory result and forced to go for revision. Prospects for its future use are unknown. 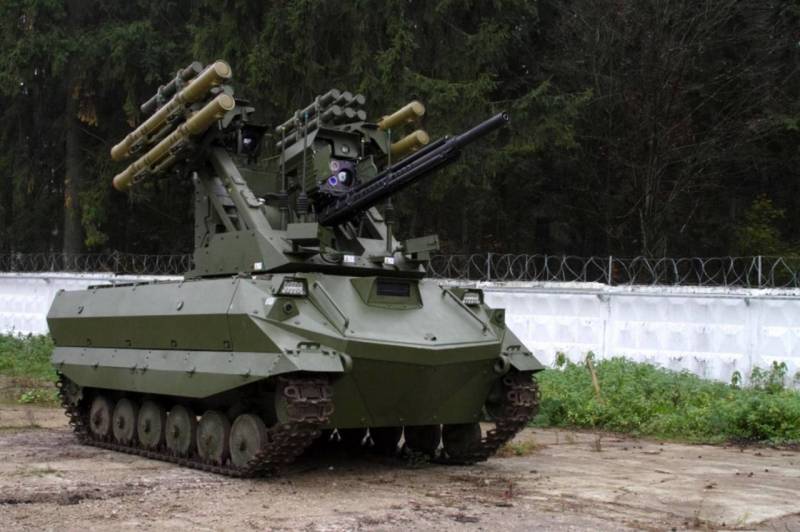 The only place where fighting humanoid robots can prove themselves is science fiction. Both in the West and in the East, the viewer loves spectacular scenes when one metal whopper hits the other with all its might. Well, or some strange creature, as it was in the "Pacific Frontier" of the original director Guillermo del Toro.
Ctrl Enter
Noticed oshЫbku Highlight text and press. Ctrl + Enter
We are
“Fedor” in orbit: why Russia needs a robot-astronaut
Flying will be worse: TOP 5 airliners of the future
Reporterin Yandex News
Read Reporterin Google News
Ad
We are open to cooperation with authors in the news and analytical departments. A prerequisite is the ability to quickly analyze the text and check the facts, to write concisely and interestingly on political and economic topics. We offer flexible working hours and regular payments. Please send your responses with examples of work to [email protected]
3 comments
Information
Dear reader, to leave comments on the publication, you must sign in.