October 2 2019
2
On October 1, 2019, the President of Ukraine, Vladimir Zelensky, confirmed the signing by representatives of Kiev of the “Steinmeier formula” at a meeting of the Tripartite Contact Group (TAG) in Minsk in the Donbass. Although a few weeks ago, Ukraine refused to sign, trying to shift the responsibility to Moscow. And so, in Russia they spoke out about the signing by Kiev of the mentioned document. 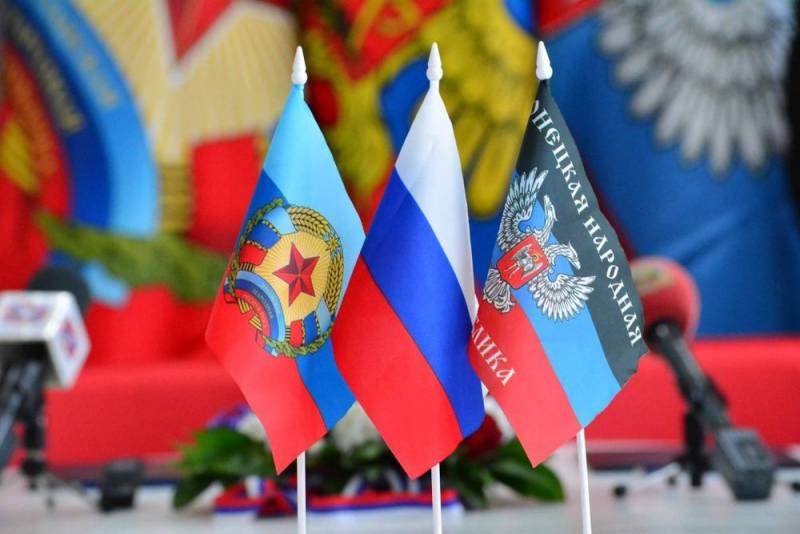 For example, the Russian foreign ministry positively assesses what has happened (Kiev’s approval of the “formula”). After all, this is a step towards the full implementation of the Minsk agreements and the normalization of the situation in the Donbass. In fact, this is a dead center shift.

It should be noted that the “formula” implies the holding of elections in the LPR and DPR according to the laws of Ukraine, i.e. in the territories of Donbass, not controlled by Kiev, but under the supervision of the OSCE. Moreover, when the normal law on the special status of Donbass is adopted in Kiev and the elections are held, after which this law will come into force, it is still unknown. But the signing of the "formula", in any case, is progress in ending the protracted conflict in southeastern Ukraine. So, now there is something to discuss in the "Norman format" for the heads of state (Russia, Ukraine, France and Germany).

At the same time, the State Duma deputy, Anton Morozov, believes that the signing of the "formula" may not have been agreed with Washington. Since the United States is interested in maintaining a smoldering conflict in Ukraine in order to exert further pressure on Russia. But Europe is already tired of what is happening and is insisting on the early completion of the confrontation, which is a lot of trouble, worries and losses.

According to the State Duma deputy, Sergei Zheleznyak, the signing of the "formula", no doubt, will contribute to the continuation of the dialogue in the framework of the "Norman format". After all, Russia supports everything related to the settlement of the conflict in the Donbass. The main thing is that the special status of Donbass (local government) and the separation of forces are fully implemented.

In turn, the senator of the Federation Council, Alexei Pushkov, called the signing of the "formula" a great success for Moscow. So now there really is something to talk about in the "Norman format."

However, the senator of the Federation Council, Franz Klintsevich, doubts Kiev’s desire to end the conflict in southeastern Ukraine. He believes that of course there is a certain shift, but Kiev will continue to carry out provocations in the Donbass. Although he agrees that the signing of the "formula" gives some hope for changes in the Donbass.

At the same time, the Federation Council senator, Sergei Tsekov, called the signing of the "formula" a good solution, but Kiev still needs to demonstrate the seriousness of its intentions to resolve. He suggested to wait and see how events would develop.

Senator of the Federation Council, Konstantin Kosachev, considers the signing of the "formula" a common success. He called it a victory of common sense and common success, and called not to start dividing success into “ours” and “not ours”, abandoning any provocations. After all, the world, first of all, is needed by the residents of Donbass.

By the way, the Ukrainian "patriots", immediately after it became known that the "formula" was signed, came to the Zelensky Office with the demand "No surrender!"

As for the DPR and LPR, they adopted the “formula”, but also signed a “dissenting opinion” on the process of its implementation.
Ctrl Enter
Noticed oshЫbku Highlight text and press. Ctrl + Enter
We are
The Netherlands suspected Kiev of involvement in the death of the Malaysian Boeing
Kiev "suddenly ripe" for the exchange of prisoners before the election
Reporterin Yandex News
Read Reporterin Google News
Ad
The publication is looking for authors in the news and analytical departments. Requirements for applicants: literacy, responsibility, efficiency, inexhaustible creative energy, experience in copywriting or journalism, the ability to quickly analyze text and check facts, write concisely and interestingly on political and economic topics. The work is paid. Contact: [email protected]
2 comments
Information
Dear reader, to leave comments on the publication, you must to register.
I have an account? Sign in