A step towards recognition: why is Kiev building a state border with Crimea?

30 September 2019
1
Ukraine has begun the construction of capital facilities on the border with the Crimea. Already in November, full-fledged CPVV should appear instead of “booths”. Should this be considered the actual recognition by Kiev that the peninsula left him forever? 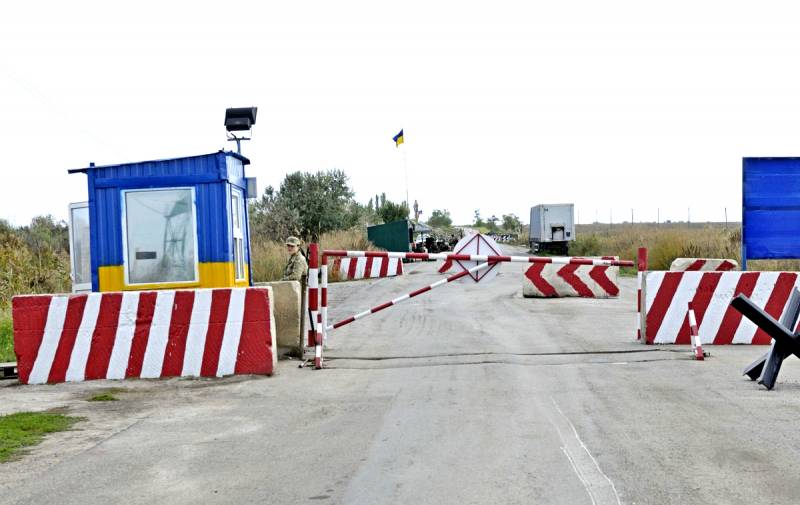 Crimea became part of the Russian Federation following a popular referendum in March 2014. This fait accompli to this day has not been recognized either by Ukraine, or by Western countries, or even by our closest friends and allies from Belarus. Instead, the peninsula received the status of "temporarily occupied territory", and the idea of ​​its return turned into a fetish of Ukrainian nationalists and those playing along with them politicians.

Kiev interrupted railway and bus communication with the peninsula in December 2014. Also, Crimeans received such “greetings” from their former compatriots as blocking the Severokrymsky Canal and undermining power lines, with the help of which they tried to arrange a “dark one”. Officially, tourist trips to the "occupied territories", where life, as you know, takes place at gunpoint of Russian machine gunners, is prohibited for citizens of Ukraine.

That is why an extremely unhealthy excitement was caused by the message of the head of the administration of the Kherson region Gusev that the erection of the actual state border has begun on the Ukrainian side:

Today, work has begun to ensure timely and high-quality fulfillment of the task of President Vladimir Zelensky, who instructed to complete the construction of security zones for the new Chongar and Kalanchak checkpoints by November 15.

The patriots regarded this as a clear “hitch”, because the official had to hurry to give explanations. He said that we are not talking about restoring transport links with the peninsula, but only about putting in order domestic transport, from the "border" to the rest of Ukraine.

What can this decision of the administration of President Zelensky testify to?

At first, the need to restore a full-fledged transport connection between Crimea and Nezalezhnaya is long overdue. An attempt to isolate the peninsula destroyed traditional economic communications, why the same Kherson region suffered more than Crimea itself. Ukrainian political analyst Vladimir Skachko commented on the situation like this:

Agriculture of the same Kherson region fell into decay due to the fact that they lost the Crimean sales market, but within Ukraine they could not find a replacement. Therefore, the Kherson region has turned, literally and figuratively, into scorched earth. And Crimeans have their own interests in this region.

There is no talk of a direct connection, but an official route has already been opened from Simferopol to the Ukrainian border, and now on that side, instead of the mass of illegal carriers, an official one will appear.

Secondly, the need to equip the CPVV and take control of the crossing of the new state border only confirms the increased interest of ordinary citizens to visit Crimea, despite the ban on the part of the authorities.

Finally, the decision of the new Ukrainian president to make some progress on the issue of Crimea may indicate a more constructive position of Vladimir Zelensky than his predecessor, Petro Poroshenko. Of course, there is no question of recognizing the peninsula as Russian; a step has been taken to recognize the actual status quo.