From Granite to Onyx: Russia sends US Navy signal

30 September 2019
8
This month was marked by another round of confrontation between countries claiming the status of great maritime powers. We are not talking about really dangerous situations fraught with possible clashes between the fleets of different countries. Well, we will not classify as such an incident with the American aircraft carrier USS Ronald Reagan, received while following the waters of the South China Sea, an unexpected, and, in truth, frankly humiliating "escort" from the PLA warships? The case is rather tragicomic, although, in a different situation, its continuation could have been far from ridiculous. 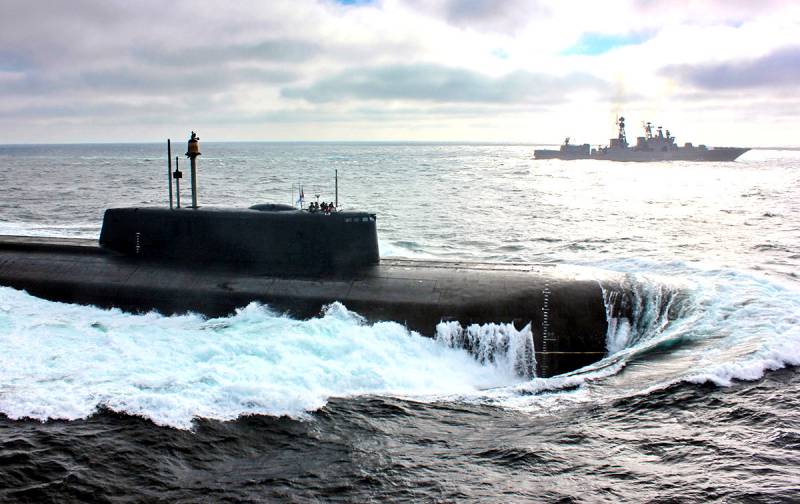 One way or another, the main "players" leading their game on the "chessboard" of the oceans have recently made quite definite moves that say a lot.

"We will threaten the outskirts ..."

Stubbornly reluctant to come to terms with either Russia's perfectly justified claims to her exclusive rights in relation to certain territories of the Far North, or with the undoubted superiority of our Armed Forces in these regions, the United States stubbornly continues to carry out activities, as they say, "curbing Arctic ambitions Moscow. " Obviously, it was within the framework of this “curb” in early September that three Arleigh Burke class destroyers departed from the naval base in Mayport (Florida) to the far northern shores: USS Farragut, USS Forrest Sherman and USS Lassen. The company they made a missile cruiser type Ticonderoga USS Normandy. Well, even if the aircraft carrier was not dragged along - that’s good ... All of the mentioned ships are part of the 2nd fleet of the US Navy, which Washington pulled out of oblivion not so long ago and was revived just to “wrestle” our country in the Arctic waters . These ships set off on a campaign, allegedly with the goal of a “temporary expeditionary mission”.

The problem with the Americans is that the recreated fleet has no headquarters in Europe, somewhere closer to the likely theater of operations, so far. Some three dozen people from its commanding staff are now huddled in Icelandic Keflavik, having created there a kind of "center of naval operations." It was under his command that the newly arrived mini-flotilla arose, which, together with the ship’s helicopter group, should make up the “ship strike force”. For whom they plan to hit, I think there is no need to explain. Especially in light of the statement made just a month earlier by the commander of the US Air Force in Europe and Africa, Jeffrey Harrigian, that the United States "is ready to restrain any activity of Russia in the Arctic." Not hostile, mind you, not directed against the interests of the United States, no matter how broadly they understand them, namely, that any. In truth, after that, the words recently said by the Deputy Secretary of the Security Council of Russia, Yuri Averyanov, about a certain “constructive dialogue” that Moscow and Washington are conducting regarding cooperation in the Arctic region, are somehow not very convincing. However, he probably knows better ...

And the Chinese are laughing ...

In my opinion, the most powerful arguments in the “dialogue” between the countries, which are much more like an open confrontation, are the words of the Minister of Defense of Russia, Sergei Shoigu, who in his very sensational recent interview mentioned that our country is not going to create aircraft carrier groups at all , but a weapon that can effectively resist them is just a priority for her. This topic was taken up with great enthusiasm by the Chinese comrades, who in their media put forward a version regarding what exactly Sergey Kuzhugetovich meant. In their opinion, it was a question of anti-ship complexes of the P-700 Granite cruise missiles. Demonstrating an enviable awareness of Russian military exercises, the Chinese sarcastically mentioned that it was such a missile, which had just recently (September 17) launched in the Pacific Ocean from our Omsk nuclear submarine, quite successfully demolished the training target, which was located in three seconds half a hundred kilometers from her. And actually, the Granites hit all 600 kilometers, and the radius of combat of aircraft carriers of the US Navy, in which they are capable of delivering effective strikes against the enemy, barely reaches 550.

All this, of course, is true, however, far from complete. Mentioning "Granite", journalists and military experts from China are talking about a model of anti-ship weapons in Russia, which has the largest, almost old age. With all due respect to “Granites” and unconditional recognition of their formidable effectiveness, this is already yesterday. If not the day before yesterday. Rather, it is necessary to carry on the Onyxes, Zircons, Caliber, in the end. Each of these missiles is quite capable of clearly explaining to the gentlemen walking under the star-striped flag, "who is the master of the sea." Only the bubbles will go ... Without a doubt, one more “move” of Russia in the game that is now unfolding is the successful launch of the Russian Navy’s Pacific Fleet by the coastal Bastion complex on the Russian Onyx anti-ship cruise missile. For the first time in history, it was carried out from the territory of Chukotka, that is, in the very immediate vicinity of the maritime border with the United States. The rocket was put "in the bull's eye" on target from a distance of more than two hundred kilometers. The hint is seen as more than transparent.

It would be better for them to turn away

The warning I put in the heading is not just words, but a specific designation taken from the Naval Code of Signals. The course pursued today by the United States to build up confrontation with Russia, including on the sea expanses of the Arctic, inevitably leads to the danger that sooner or later our missiles will no longer be launched for educational purposes. And not only ours! Praising the Russian Granite, the Chinese are modestly silent about their own Dong Feng 26 and Dong Feng 21, each of which may well send to the bottom a floating airfield worth under $ 40 billion, full of airplanes that simply will not have time to fly into the air. There is no doubt that if the PLA hadn’t been armed with its own “killer aircraft carriers,” Beijing would not have made demarches like the clearly mocking USS Ronald Reagan. They don’t joke with such things, especially during the period when relations between states are extremely tense. However, that there is a mighty China. The aircraft carrier "armada", not the first month of the plowing wave of the Persian Gulf, is not even afraid of Iran, whose army capabilities are completely incomparable with the power of the Russian or Chinese armed forces.

Next year, it is expected to put into operation the Russian Navy at once six combat submarines. Such a massive replenishment will occur for the first time since the collapse of the USSR. What will the Americans answer? Will they continue to stamp their Virginia? Are there any arguments against Poseidon? However, and in addition to improving and replenishing the fleet, the US Navy has other problems. For example, recently the Pentagon was forced to begin a large-scale verification of numerous reports of drug use by their personnel. With clenched teeth, Richard Clark, the head of the US Special Operations Command, had to publicly acknowledge that his subordinates were, to put it mildly, not an example of compliance with both the disciplinary regulations and ethical standards. In view of this, there were “elite” US Navy special forces soldiers who had to be hastily removed from the mission in Iraq due to rampant drunkenness, harassment of everything that moved and addiction to cocaine. However, apparently, the situation with the rest of the sailors is no better. After intense shifts, they “relax” so that the military department is no longer able to hide the consequences. Hence the need for an investigation of these outrages, which required the creation of an “independent commission”. Apparently, their inspectors cannot cope.

The time of the undivided rule of the United States on the seas and oceans has passed, apparently, forever. Either Washington finally acknowledges this and turns off the dangerous course that it is trying to “confront” with anyone - Russia in the Arctic, China in the Asian seas, or ... The whole world will finally receive the answer to the question: " How quickly do aircraft carriers sink? ”