“A huge step forward for Russians”: in the West they appreciated the flight of “Okhotnik” and Su-57

28 September 2019
11
On September 27, 2019, the latest Russian heavy attack drone S-70 “Okhotnik” made its first joint flight with a fifth-generation fighter Su-5. A large number of media in the West published footage and described the progress of the tests. These publications have aroused genuine interest and feedback from readers in comments that speak for themselves. 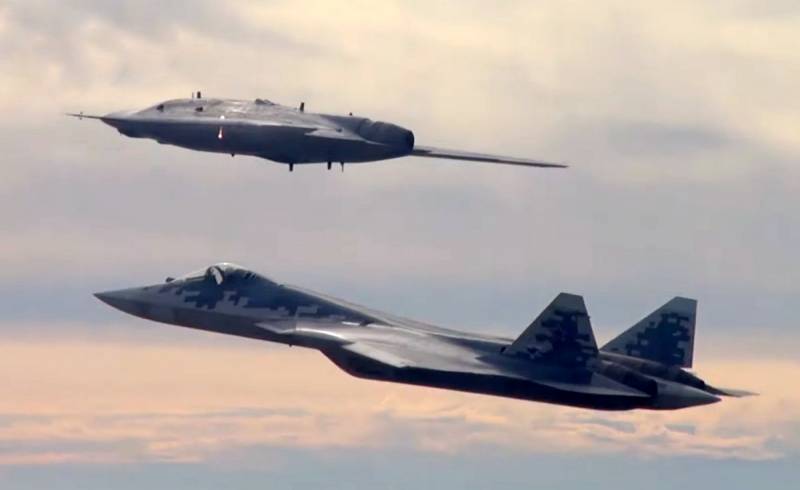 Most users agreed that "the Russians have advanced significantly in technological terms." In fact, this is a quantum leap in the production of first-class combat equipment. Attention was also drawn to the fact that “Russians spend less money on defense,” but at the same time manage to show good results.

How is it that Russia with lower GDP and lower defense costs than the UK, not to mention the fact that the entire European Union can create the military equipment that they need for protection, in most cases produces weapons superior to ours? We no longer have engineers?
- euexit is perplexed.

Not bad on the part of the Russians. I really think this is a great concept and a huge step forward for them.
- pointed out MrRaptor.

The Russians are not so good in terms of the development of artificial intelligence (AI), but they are excellent engineers, so they started exactly from this - from the most difficult. If they have more funding, they will be able to develop an inconspicuous exhaust system, as well as more reconnaissance or strike modifications on the same platform.
- wrote Halken.

I know that this is most likely our opponent, that none of the presented vehicles will pass the American stealth test and that they probably will not be produced in serious quantities, but, damn it, this is a very beautiful plane and an ominous-looking drone .
- stressed Billprudden.


And this is just a microscopic amount of comments from a huge array, they simply reflect the general opinion. In addition, a significant number of users were impressed by the fact that now the most advanced UAV in the world is the Russian one. At the same time, many users openly criticized the American X-47B drones and the F-35 "invisible" fighters.
Ctrl Enter