A new threat to Venezuela: why did Maduro come to Russia?

25 September 2019
4
The official visit to Russia by Venezuelan President Nicolas Maduro, which began on September 24, is taking place against the backdrop of a sharp aggravation of relations between both countries and the United States. Caracas Washington "pleased" with a new portion economic sanctions, and Moscow - the non-issuance of visas for a significant part of the members of the Russian delegation heading to the session of the UN General Assembly. Not fatal, of course, but it looks like an outright insult that threatens to result in another Russian-American diplomatic scandal. 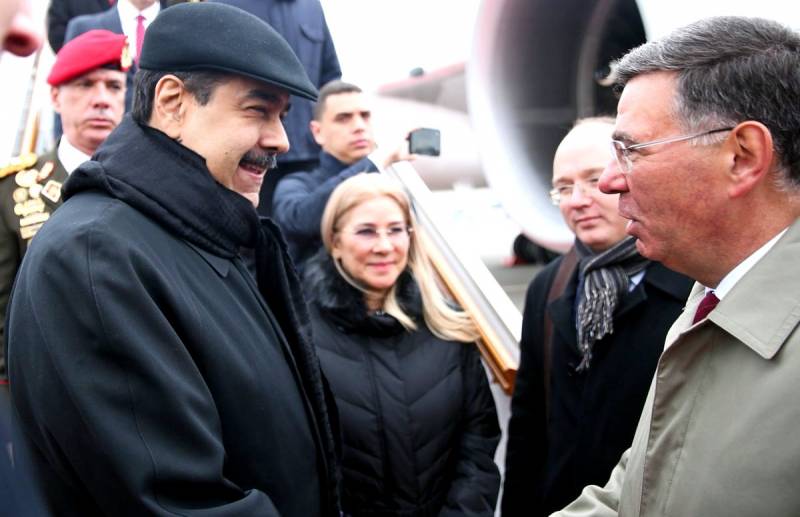 Against this background, the arrival of the Venezuelan leader and his upcoming talks with Vladimir Putin look like a meeting of the Allies before the next battle with a common enemy. However, the question remains: what specific points will be discussed during this trip? Let's try to figure out what and why the head of the Bolivarian Republic granted to Moscow.

Before conducting a conversation, in fact, about the visit of a foreign guest, it is worth recalling what is happening in his homeland. The situation in Venezuela, where the civil confrontation inspired by Washington lasts from the beginning of this year, may well again go from a sluggish phase to a stage of acute conflict. The established state was a kind of precarious equilibrium, in which the self-proclaimed "head of state", a direct protege of the United States, Juan Guaidó, temporarily stopped active attempts to remove her legitimate president from power, and official Caracas did not take too harsh actions against trying to rock the situation in the country pro-American "opposition" is about to collapse. Nicolas Maduro refused to conduct quite hopeless negotiations with both his political opponents within the state, and with their owners from the State Department and the White House. The cancellation of all scheduled meetings with US representatives, Maduro said on September 20. The reason, as in the case of the cessation of attempts to find a compromise with the "opposition", are more and more restrictions imposed by Washington. They have no desire to abandon their “cute” habit of negotiating with someone, having first thrown a noose around his neck and tightened it tighter.

The position of impostor Guaido, who back in April loudly announced the beginning of the “final stage to eliminate the Maduro regime,” is becoming increasingly desperate. Disappointed in his ability not only to arrange a sensible coup, but to make his way to the beer stall without waiting in line, the “curators” from the United States seem to have finally given up on the very same “created leader of the new Venezuela” themselves. If in July of this year in Washington they promised to allocate more than $ 40 million specifically for the support of his gang (actually, originally intended for humanitarian aid for various countries of Latin America), now they have gained water in their mouths. It seems that the grief “revolutionary” there was attributed to the category of “bad assets” and are no longer going to invest in it. But in Caracas they intend to do this "young talent" more than specifically. Based on the old, but very effective principle, “if there was a man, there would be a case against him”, the Prosecutor General’s Office of Venezuela initiated a criminal case against Guaido under the extremely unpleasant article “high treason” at the beginning of this month. And it’s not at all a coup attempt! As it turned out, this rogue, even before taking the presidency, had already begun distributing the country's territory to neighbors. So, he promised Guyana the disputed lands of Essexibo, according to some sources abound not only with oil, but also with gold, and even diamonds. As it was said there: "Yes, you can’t save any volosts on you ..."? In a word, the future of the failed president looms in rather gloomy colors.

What threatens the Rio Pact with Venezuela?

With all this, it would be naive to believe that Washington intends to leave Venezuela alone. Whatever Donald Trump said at the Osaka summit of the “Big Twenty” about the “total reluctance to fight” with this country, and about the “five strategies” he allegedly had for it, all these strategies seem to come down to formulas in the following spirit: "Bad, very bad, worse." Well, and so on ... From the State Department, the Ministry of Finance and other government agencies of the United States, calls continue to be made to "put an end to the inhuman regime", invariably accompanied by more severe economic sanctions. However, most of all in Caracas, they are afraid of the consequences of the fact that the United States, taking absolutely extreme measures, has reached the implementation of the so-called “Rio Pact”, an agreement concluded in 1947 by the USA and a number of Latin American countries, which in fact opens the way not only to complete physical blockade of Venezuela, but also to armed intervention on its territory. The fact that this country in 2013 withdrew from the treaty, of course, no one cares. Moreover, the “parliament” of the rogue Guaido this year has already requested back to the number of its participants, albeit without any right to it. The Inter-American Mutual Assistance Treaty, the provisions of which, in theory, should apply exclusively in the event of armed aggression against one of the participating countries, is a serious thing. In Caracas, they are seriously afraid of the joint actions of Brazil, Colombia and Panama, which, having united, in principle, can try to cut off Venezuela from the outside world, interrupting communication with it both by land and by sea and air.

In this case, Maduro’s arrival in Moscow may well have as his main goal the probing of how far Russia is ready to go in his support. So far, all Washington’s attempts to put pressure on our country, including the vicious “warnings” against “doubling the bad bet,” sounded some months and a half ago from the lips of the main hater of Venezuela in Washington, John Bolton, have not shaken the Kremlin’s determination and constancy . Bolton, however, is no longer in the White House, but the "sediment", as they say, remains. Yes, what! They are not going to stop their subversive activities aimed at overthrowing the legal authority in the Bolivarian Republic. They’re just trying again to do it by someone else’s hands ... And let the Colombian Foreign Minister, Carlos Holmes Trujillo, at the end of the meeting of the Rio Pact, which was held, as one would expect, in New York, said that “the issue of intervention is not even discussed ”, it is believed in this with great difficulty. Moreover, as already mentioned, the application in this particular situation of the principles of the Inter-American Treaty of Mutual Assistance is completely groundless and illegal. Who can Caracas turn to for help? Cuba, in a confrontation of this magnitude, does not seem to be too powerful an ally. China, which in Venezuela until recently had high hopes, judging by its latest actions, decided to get as far as possible from the conflict unfolding around it. Only Russia remains ...

“We will discuss the construction of a multipolar world”

It was this global issue that named Nicolas Maduro as one of the subjects of his future conversation with the President of Russia. It sounds, of course, wonderful, and the cause is undeniably good, at least for our two countries. However, it is said painfully generally. A little earlier, while preparing for the visit of Maduro, Jorge Arreas, the head of the Venezuelan Foreign Ministry said that it was planned to "sign new agreements, both with the Russian government and with individual companies." This is already “warmer”. In addition to the purely political aspects, the relationship between Moscow and Caracas has a very specific economic background, where the balance is far from in favor of Latin Americans. Venezuela is today one of the most significant debtors to Russia, whose obligations to our country are estimated from 3.5 to 3.7 billion dollars according to various sources. According to available information, just this month, Caracas was supposed to make a loan payment of $ 200 million. In any case, this is the figure voiced by the national finance minister, Anton Siluanov. The current more than harsh economic realities of the Bolivarian Republic make one seriously doubt its ability to fulfill this obligation in a timely and full manner. Isn't this what will be the main conversation?

Be that as it may, refusing to support Venezuela for Russia now is more expensive for itself. In addition to the debt sums announced above, there are serious joint projects in the fuel and energy sector and the purely geopolitical “types” that Moscow has in this country. In the event that the efforts of Washington and its proteges to overthrow Nicolas Maduro are successful, all of this can be forgotten immediately and forever. As recently as last month, Guaido spoke out categorically against the idea of ​​finding Russian warships in Venezuelan territorial waters, and the rebellious “parliament” of the country, which was his stronghold, went even further, declaring the military agreement between Caracas and Moscow “invalid”. Approximately in the same vein (according to the formula “I owe everyone - I forgive everyone”), this entire gop company considers financial obligations to our country as well as its shareholding in the oil sector of the Bolivarian Republic. What will happen if, God forbid, they reach the real power, we can predict by the example of the notorious “debt of Yanukovych”. Received from our country, a slightly smaller amount, "only" 3 billion dollars, to scratch from the tenacious claws of Ukraine, which has grabbed it, has not yet succeeded. There is no doubt for a second that, if the Venezuelan “Maidan” is successful, Russia can claim after all its investments and loans, perhaps for the notorious ears of a dead donkey ... Actually, we have nowhere to retreat.

Landing in Moscow, Nicholas Maduro said that he had "arrived in his Russian homeland." I would like to believe that these words are sincere, and the head of Venezuela wants to receive effective support from our country in the struggle, which he, first of all, intends to lead to a victorious end. It’s better to agree on plans for a joint confrontation with the United States, and not just on a banal delay in debt, or, worse, a pretty house somewhere near Rostov.