Be-200: Does anyone need a unique Russian airplane

22 September 2019
12
The story of the Be-200 amphibious aircraft is very similar to many others with the participation of new Russian models equipment. 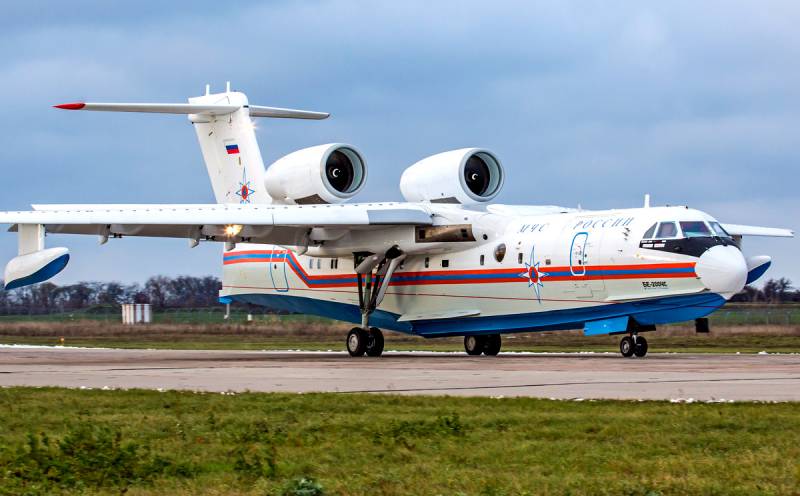 The history of this unusual aircraft was developed in 1992, when it was decided by Decree of the Government of July 17, 1992 No. 497 to begin work on a new amphibian. There were many potential tasks for the brainchild of the Beriev Design Bureau: it was putting out fires, and conducting search and rescue operations, and monitoring missions and much more. In other words, Russia was supposed to get a modern multifunctional complex, which had all chances to arouse interest both within the country and outside it.

Not every aircraft can be taught to “work” equally well both from airfields and from water bodies. At the same time, in terms of aerodynamic quality, the new machine was practically not inferior to "land" aircraft of a similar class. The first flight of the Be-200 completed in 1998. It is appropriate to say about one important detail: for all its merits, the Be-200 can only be arbitrarily called “new”, because the de facto machine became a further evolution of the Soviet A-40 Albatros amphibian, which made its first flight back in 1986. Its maximum speed is 800 kilometers per hour, and the combat load (torpedoes, mines, depth charges) reached a solid 6500 kilograms. The Soviet project was closed in 2012: by then only two Albatrosses had been built. However, subsequently the issue of replacing the very old Be-12 anti-submarine aircraft became even more acute, so I had to return to the project. 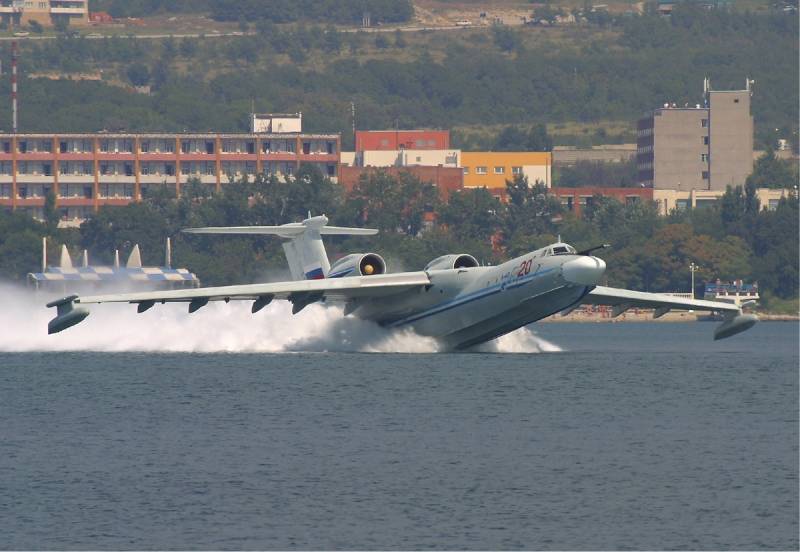 The Be-200 also faced serious obstacles in life, which often turned everyone upside down. And, what is most unpleasant, they prevented full-fledged serial production: until now, the machine was produced in piece quantities.

Let's take a closer look at the situation. In the 90s, the project developed very rapidly, oddly enough, due to the difficult economic situation inside the country. The plane, for example, was shown in 1999 at an exhibition in the French Le Bourget, where it was a success. The machine then successfully completed demonstration flights with the discharge of six tons of water. In total, by the end of October 1999, the aircraft completed about 80 test flights.

In 2008, the production of the Be-200 had to be transferred from the Irkutsk Aviation Plant to the Taganrog TANTK them. G.M. Berieva. The difficulties associated with the “relocation” were exacerbated by another unpleasant moment: by the time the production was launched in Taganrog, the on-board electronics had become pretty outdated, so engineers had to create new systems and subsystems for the aircraft. However, the difficulties were not unsolvable. In May 2016, the Taganrog Plant rolled out the first serial Be-200ES for the Ministry of Emergencies.

Now the pilots have received the ARIA-200 flight and navigation system, which allows you to simultaneously solve several problems. Designers also significantly increased the glider. The maximum speed of a flying boat is 700 kilometers per hour, and the practical range is 3100 kilometers. The aircraft can take on board up to 64 people.

The Russian Emergencies Ministry is most interested in the machine: as recent events have shown, there really is a lot of potential work for him. Therefore, until 2024 TANTK them. G.M. Berieva must deliver to the department a batch of 24 new cars, which, in turn, opens up new opportunities for the aircraft.

Widespread domestic exploitation will invariably attract interest from potential foreign buyers. Previously, several cars were ordered by China, Indonesia and Chileans. The most important event for the export promotion of the aircraft is the recent approval of a draft contract with the US company Seaplane Global Air Services for the supply of ten Be-200ES in the United States. Russia plans to start deliveries in 2021. This is a definite success for Russian aircraft manufacturers: it is not often possible to see a domestic winged car in the American sky. 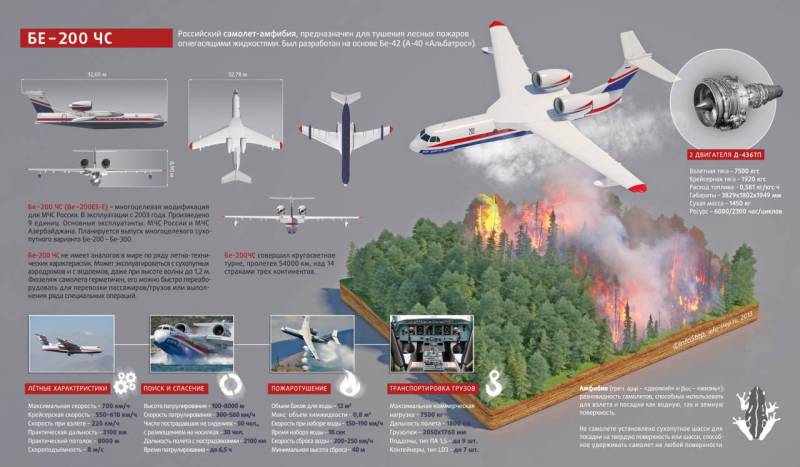 However, experts believe that the Be-200 can achieve real success only after the development of new areas and, obviously, difficulties can arise here. The Asian market itself and the market of the countries of the so-called “third world” are very wide, but competition has sharply increased in recent years. So, the Japanese several years ago lifted the ban on the export of military equipment and dual-use products. And the amphibian manufacturing company Shin Maiwa obtained permission from the Ministry of Defense to export the ShinMaywa US-2 aircraft, the tasks for which overlap with those of the Be-200. 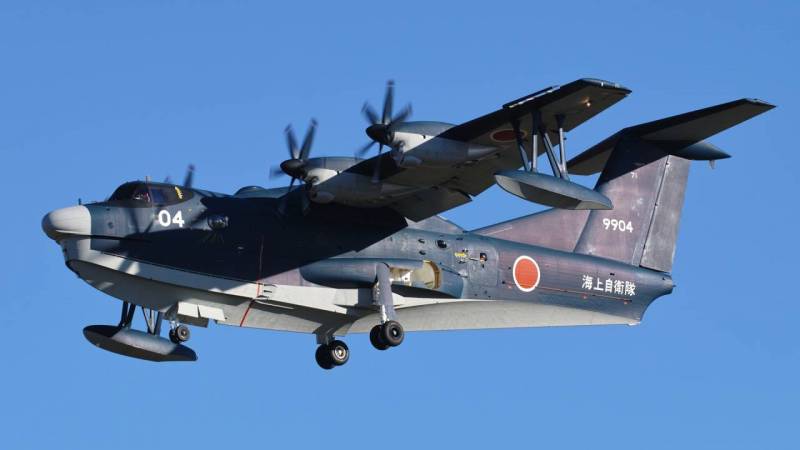 An even greater threat is China, which will soon become the main competitor for the entire Russian aircraft industry and the military-industrial complex. The Chinese are now actively promoting the latest heavy four-engine amphibian amphibian AG600 "Jiaolong". It is capable of collecting 12 tons of water on board in 20 seconds and is described as "the world's largest amphibious aircraft" in a number of media. 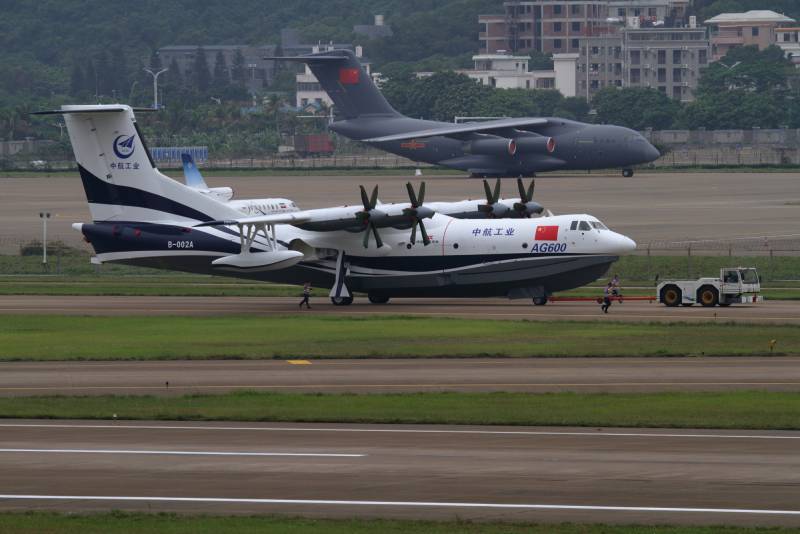 Despite the fact that the machine completed its first flight in 2017, China is already doing everything possible to promote it to the markets as efficiently as possible. And the gap between the Be-200 and the AG600 will gradually narrow.

Earlier, there was also information that Turkey could buy a car. At least, according to Turkish Minister of Agriculture and Forestry Bekir Pakdemirli, the Turks will consider Russia's proposal for the supply of Be-200. But this, you need to understand, is simply a consequence of the successfully developed for Russia political situations where Turkey has become a situational ally (for how long?). Recall that the conflict between the West and Erdogan has already “cut off” the wings for the Turkish Air Force: apparently, Ankara will not receive the new F-35s.

The Be-200 itself has enough difficulties. Suffice it to say that the car still flies on Ukrainian D-436TP engines. Previously, they considered replacing them with the Franco-Russian SaM146 - the same one that is installed on the Sukhoi SuperJet 100 and which is often criticized by Russian patriots. “We are working with the UEC in this direction (to abandon the Ukrainian engines - ed.), Work is ongoing,” said Yuri Grudinin, general director of PJSC Il, earlier on the sidelines of the Le Bourget air show this year. 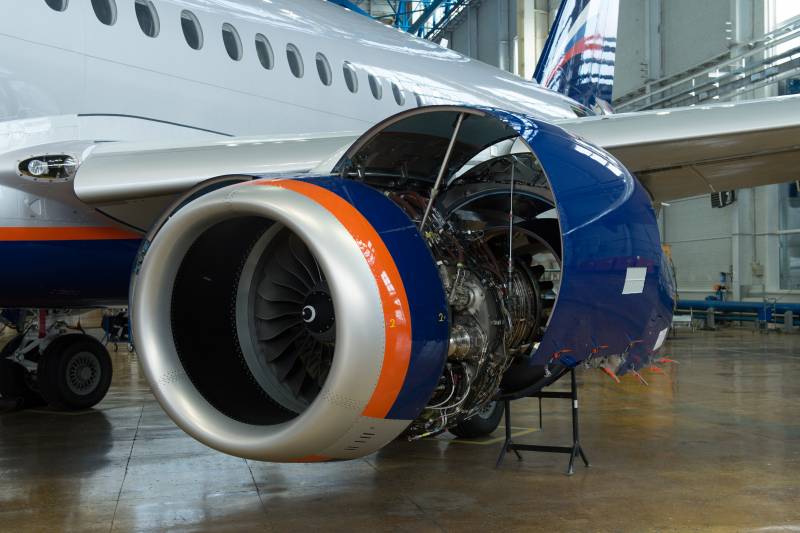 However, then it became known about the revision of earlier plans. “SaM146 has now a little delayed the program. Now we are supplying 436 engines (Ukrainian D-436TP - ​​ed.), ”Said the head of Ila.

Thus, a very interesting and complex picture emerges, in which the fate of the Be-200 rests largely on the Ukrainian “engines”. But Russia has every opportunity for the plane to declare itself loudly. Whatever the competition in the market, it is much less fierce than, say, competition for the market for narrow-body passenger aircraft, where, due to the presence of a Boeing and an Airbus, Russia most likely has nothing to do. In general, the development of niche directions could become a lifeline for the Russian aircraft industry: the state will not be able to subsidize it forever.
Ctrl Enter
Noticed oshЫbku Highlight text and press. Ctrl + Enter
We are
The “newest” Mi-38 helicopter: is it a failure?
Chinese super amphibian versus Russian Albatross - score 0: 1
Reporterin Yandex News
Read Reporterin Google News
12 comments
Information
Dear reader, to leave comments on the publication, you must sign in.