22 Trillion Debt: Why the US Still Stays afloat

18 September 2019
13
American economy set another anti-record. The US budget deficit was 4,4% of GDP, or $ 1,067 trillion. The public debt of a leading world power exceeded 105% of its GDP, jumping over the 22 trillion dollar bar. For any other country, such a debt burden would be unbearable, but the “hegemon” is worth it. What could be the last straw that breaks his back? 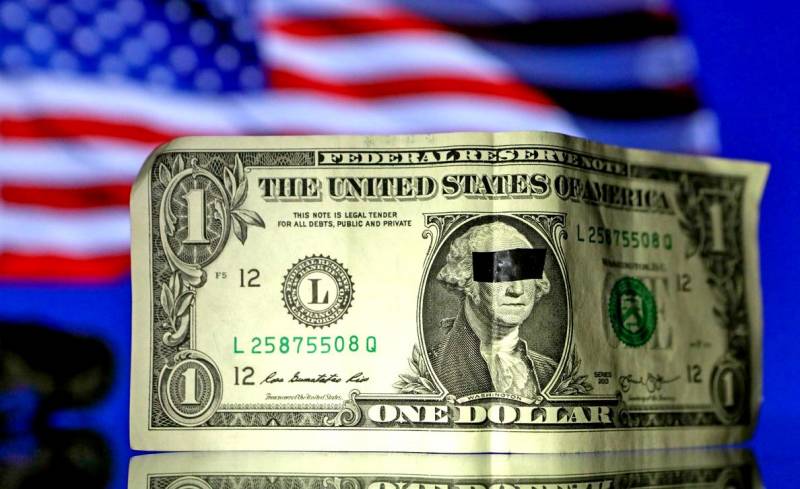 Frankly speaking, such stability, incredible by any standards, is a direct consequence of the status of the United States as a world hegemon, which, if desired, is capable of breaking through the knee any person who disagrees with it policies. In this context, the US dollar is more than just an American national currency. Political analyst Alexey Chernyaev explains:

The size of public debt is a function of the country's position in the world system. And while the United States remains hegemonic in the global system, they, in fact, can afford any amount of public debt and budget deficit without visible consequences.

However, the foregoing does not mean the inexhaustibility of this system. Washington's loss of its special position will ultimately lead to its collapse. And some prerequisites for this are noticeable now.

Without the possibility of further continuous expansion, capitalism, having seized all significant markets, inevitably came to its crisis. President Donald Trump, as the representative of the so-called “Imperials,” proclaimed a course towards the collapse of the former globalist world order system. The world economy began to rapidly segment because of the trade wars it launched, the old international alliances began to fall apart, and new ones were formed in their place. Trump himself leads to the fact that the United States from the "hegemon", surrounded by faithful vassals, become the power of "number one" among others.

But the “imperial” Trump is not going smoothly. Brought to power by the "Rednecks" who believed him, he began to pursue a policy aimed at supporting primarily large businesses. Donald Trump's protectionism benefits corporations, but also hits small businesses. For example, under Chinese counter-sanctions, a painful blow was inflicted on American farmers producing soybeans and other food products.

The US president also reduced taxes, which pleased the layer of the richest fellow citizens, but the same measure reduced revenues to the federal budget, increasing its deficit. A year ago, Trump demanded a 5% reduction in cabinet spending, but a new anti-record was set instead. As a result, on the eve of the United States began an indefinite strike of workers at the leading automaker General Motors. 31 plants stopped working, more than 50 thousand of their employees demand higher salaries, better medical insurance and job security.

The US economy is still growing, fueled by Trump's active protectionist measures, but its further slowdown is forecasted against the backdrop of a trade war with the PRC. For the slogan "America First" you have to pay a dear price, because other countries have a different opinion on this. The last straw may be an attempt by the US president to devalue the dollar to gain a competitive advantage for national producers over China. This will give a certain effect, but it will also have a downside.

In the medium term, against the backdrop of the further strengthening of the PRC and the inevitable sovereignty of Europe, the United States may lose its status of world hegemon with all the consequences for its position as the main debtor. It is possible that the United States itself will go to the restructuring of its debts, without waiting for an uncontrolled collapse, about which we detail told earlier.

We are in Yandex Zen
It's important
7
US Global Economy: An End That Sneaks Noticeably
The “ninth ramp” approaching Russia will not kill her, but will make her stronger
Reporterin Yandex News
Read Reporterin Google News
13 comments
Information